BACK
Second Time The Charm? 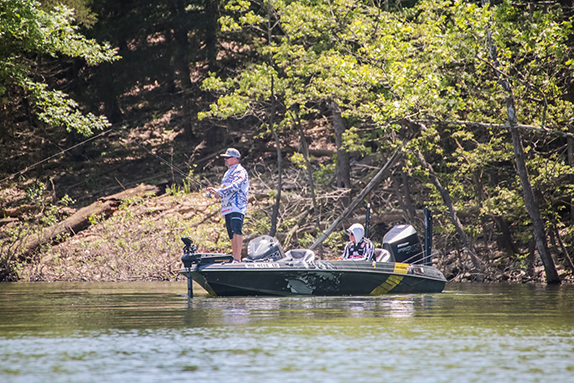 James Watson said his decision to target flatter banks is what did in his hopes of a good finish at the first Table Rock Lake Bass Pro Tour.

Both Mike McClelland and James Watson admit they missed something at Table Rock Lake last week. It was a frustrating tournament for both, being on their home water (literally) and watching others pile up whopping fish catch totals.

McClelland missed the Knockout Round for the sixth time this season, finishing 66th. Watson fared only slightly better with a 54th-place showing. To both, the outcomes were unacceptable considering their level of experience at Table Rock.

Both were already looking ahead to gaining some redemption at Grand Lake, but flooding there caused Major League Fishing officials to cancel that event and instead will hold a second straight tournament at Table Rock. It’ll serve as a mulligan of sorts, but also a chance to finish the season strong with just one event remaining after Table Rock 2.0.

“In all of my career, I’ve never been more upset and sick about my performance and my results because I didn’t make a check and knocked myself out of the third (MLF) Cup,” Watson said. “It’s not been a very good year for me.”

Watson Was In Catch Up Mode

In Watson’s estimation, he didn’t anticipate the fish being ganged up on certain kinds of banks like they were.

“I had a great practice,” he said. “I could’ve caught 40 fish a day and expected to do the same, but I fished too flat of stuff with the dropping water. I should’ve focused more on steeper banks.

“When the water drops, the fish on the flatter stuff tend to not be there or are non-committal. I had so many fish come out and follow my worm rig and white swim jig and not eat it.”

Watson was 30th after the Group A Shotgun Round and faced a 10 1/2-pound deficit heading into the Elimination Round. A mechanical issue in the first period forced him to remain on the lower end of the lake, where he changed things up.

“I tried a spoon deal by the dam and found it had started,” he said. “I had a good first period only to find out it’s too early to find groups of fish. It was one here, one there, but they were all good ones. I had to fish bunch of docks to catch a couple instead of one dock with a herd of them. I couldn’t gain ground that way.”

He caught fewer fish in the Elimination Round, but caught more weight, eventually falling 15 pounds short of the top-20 cut. If given the chance to do one thing differently, he would’ve committed to the Kings and White river arms.

“I would’ve kept with the swim jig up the Kings and White and not stopped,” he said.

McClelland’s season was supposed to turn around at Table Rock. He’d yet to make a Knockout Round cut so most figured a tournament in his backyard (literally) would help him get some positive momentum going. There was a catch, though, McClelland says. 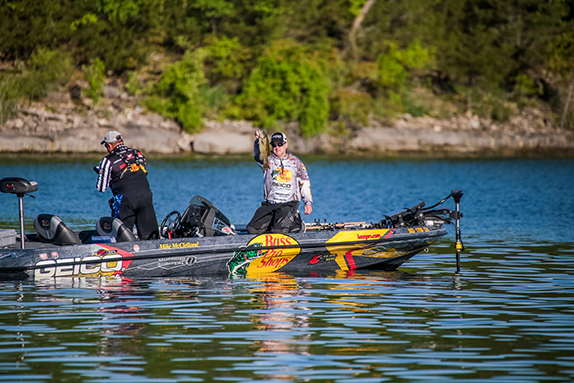 
Mike McClelland said his decision to target post-spawn bass offshore was the wrong call to make considering how fish were still shallow.

“I know I’m considered a resident here now, but for the last 15 years I haven’t fished on Table Rock past the first or second week of April,” he said. “I’ve fished it only in the spring or fall.”

To bone up on current conditions, he spent a few days on the lake prior to it going off limits.

“There were a ton of fish spawning and getting done spawning,” he said. “I had seen enough of that going on to feel there would be a good offshore bite going on (in the tournament). I got enough bites in practice to make myself feel like I could do well on the post-spawn fish.”

Unfortunately, the spawning phase wound up lasting much longer than he anticipated and his offshore strategy didn’t produce. That was due, in part, to the water level rising and giving those shallow fish no reason to vacate the bank.

“When we showed up to Table Rock after being at Smith and the lake had come up four or five feet, I knew I had to make real adjustments or pray hard they sucked the water down. There were still guys catching them looking at them. I truly didn’t think there’d be spawning fish (that) week. I really pushed the issue to make something happen that wasn’t quite happening.”

He was 34th after the Group B Shotgun Round and gained only one spot in the Elimination Round, extending his string of bottom-half performances. His best finish this season was 48th at Lake Conroe.

“I’m taking full responsibility,” he said. “All of my equipment has functioned perfectly. I have no excuses except for the decisions I’ve made.”

A veteran of all of the MLF Cups prior to the formation of the Bass Pro Tour, McClelland admits the larger field compared to previous Cups and the element of practice has contributed to his struggles.

“I just haven’t broken down an area well enough in this format,” he said. “In the Cups, you fish by the seat of your pants. It’s incredible when you give this group 1 1/2 days of practice how well they’re breaking down sections of the lake we’re fishing.

“I’m accustomed to this format, but until now I haven’t let ScoreTracker truly spin me out. The gist of it is when you put 40 guys on water versus 10, the needle moves way faster and the odds for things to happen increase by four times. You’ve got 40 great anglers on the water each day and more than half will catch them and catch them good. I have to make some dramatic changes and a lot of it is in my decision making.”