Cox Won Again By Doing What He Does Best 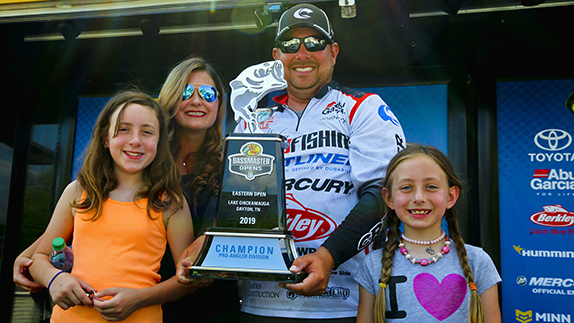 John Cox posed on stage with a trophy at Lake Chickamauga for the second time this month.

"A few of them I caught were in their last few days of life," he said. "I felt so bad when I'd throw them in the livewell. One of them had an eye that had exploded and it was just white with stuff growing out of it and it had the biggest cut on its belly – I don't know if it was from braid or what. I saw him just easing down the bank, looking for bluegill."

The fish was one of several that died in his livewell, costing him a 4-ounce penalty on each occasion.

"A (Berkley) MaxScent General was his last meal. That's so awful! It wasn't even something real."

"Awful" is the exact opposite of what Cox's performance ledger shows this year. The Floridian, who holds a 1-point lead over David Dudley in the FLW Tour Angler of the Year race, picked up his second win at Chickamauga in the span of three weeks with a three-day total of 66-05.

He'd planned to ply the lake's renowned offshore ledges for fish that had already set up house in their summertime haunts, but ended up getting away from the masses and relying on his strength – power-fishing in shallow water. His weights went down in each succeeding round, but nobody was within 4 1/2 pounds of his total when the scales closed on the final day.

Following are some of the specifics of his latest triumph.

Cox primarily caught bedding fish from the mid-lake area on up in his victory in the Tour event at Chick earlier this month. His three days of practice leading into the Open showed him that wouldn't be an option this time.

"I was hoping some rain would cool the water down and there'd be a late spawn, but it was just miserable hot," he said. "Going in, I thought the ledge guys would just dominate – the few fry-guarders that were left (on the beds), you could just see them disappear. It was really discouraging and that's why I ended up fishing (offshore) on the first day of the tournament."

His focused on areas much closer to the dam during the Open. Not much was happening in the shallows down there when competition got under way. He caught a couple of decent keepers from offshore shell beds, but was not inclined to battle the crowds that had congregated on them.

He spent the rest of that day bouncing between about 10 "rough patches" that he believes comprised the edges of deeper bluegill beds in 7 to 10 feet of water. He had them all to himself and used a casting jig to compile his biggest bag of the event (26-11), which put him atop the initial standings.

"I was pumped," he said. "Then when I went down there on the second day the first three or four patches all had boats on them. I abandoned that and went to the first bank I came to, put the trolling motor on 50 and just started throwing at everything.

"I instantly started seeing fish and out of maybe every 10 fish I saw, I could throw to one and catch it. If I caught them off guard, I'd get them. I just stuck with that the rest of the way – I thought about fishing deeper on the last day, but I was just so locked and I was having so much fun."

His 21-12 stringer, which came courtesy of a wacky-rigged General, included an 8 1/2-pounder. He briefly tangled with a fish that was considerably larger than that.

"The 8 1/2 was super-healthy and it looked like it just came out of the deep water. She was sitting around a bluegill bed eating bluegills that were bigger than my hand – a 5-pounder couldn't have eaten those bluegills.

Day 3, which he began with an advantage of nearly 8 pounds, was more of the same, although he didn't get many big bites. His 17-14 haul was far more than he needed, but he wasn't confident that he'd won until everyone but him had crossed the stage.

"One guy (5th-place finisher Chad Pipkens) had almost 30 pounds on one day and (3rd-place finisher Buddy Gross) lost two giants. Even when I only had 10 minutes left, I ran up the river just to make three casts.

"You just don't know what can happen. On that lake, anybody can come in with a giant bag."