Martens Paced Himself, Then Focused Out Deep 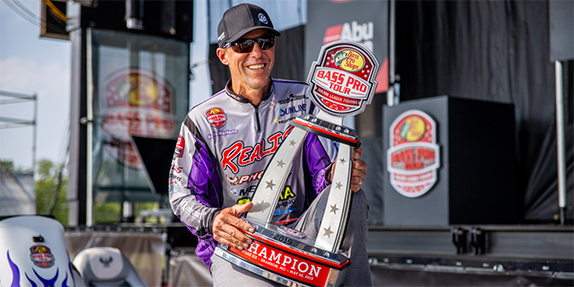 Aaron Martens made his first Bass Pro Tour Championship Round at Table Rock Lake and left with the trophy.

(Editor's note: In observance of the Memorial Day holiday Monday, a new First Cast article will not publish until Tuesday, May 28.)

For some reason, Aaron Martens just seems to click with Table Rock Lake.

He says it reminds him of lakes out west that shaped him as an angler, like Shasta and Oroville and Folsom – clear, deep reservoirs where he can target fish offshore with his electronics.

Table Rock has been the scene of some pretty sizable moments from his career, too. Back in 2005, he caught a 9-pounder – yes, a 9-pounder! – on day 2 of the Bassmaster Tour stop there. He went on to finish second in that tournament, which helped him lock up the first of his three B.A.S.S. Angler of the Year titles, edging current MLF color analyst Marty Stone.

In 2014, when the Elite Series paid a visit to the Ozark fishery in early April, he held the day-1 lead, thanks to an 8-pound kicker. While he wound up finishing fourth, it reaffirmed for him that it’s a place that lays out to his liking.

Earlier this week, Martens and Table Rock had a reunion of sorts and while he didn’t haul in a lunker of any sort, he played the numbers game to perfection in winning the MLF Bass Pro Tour event.

Martens’ final tally for his four days on the water looked like this: 167 fish (only Cliff Pace and Andy Montgomery caught more) for a tournament-best 283-04. The most important totals, however, were the ones he amassed during the Championship Round on Wednesday – 50 bass for 86-04, good enough for an 8 1/2-pound win over Montgomery.

“This lake likes me a lot,” Martens said.

Upon arrival, many in the field were enamored with the high water that drew plenty of bass into the shoreline cover. What’s more is there were a surprisingly high number of fish still spawning and that triggered some competitors to shape their game plans around shallow water.

Martens sampled a little bit of everything in practice, but ultimately chose to focus on post-spawn fish offshore.

“I figured in parts of the lake they were still spawning, but the parts I wanted to fish they were done,” he said. “The shad were finished spawning after the first day of practice, so I decided to focus on offshore and deeper stuff. Plus, I didn’t see lot of guys doing it.”

Here’s a recap of how Martens conquered T-Rock.

With a limited practice session – BPT anglers basically get 1 1/2 days – Martens spent much of his pre-tournament time studying his electronics and scanning for areas that had concentrations of fish.

“It was all about locating as many bass as I could,” he said.

He fished shallow and deep and had success both ways as he caught largemouth, smallmouth and spotted bass.

“I swear I could’ve had 100 pounds a day easily in practice,” he said.

The Group A Shotgun Round didn’t go as well as Martens’ had hoped. He still managed 56-14 that put him in the top 15 heading into the Elimination Round.

“It wasn’t terrible, but I thought I’d catch 80 or 90 pounds,” he said. “I was sharing water and I focused more on the shallow fish, knowing they’d get burned up the fastest.”

As he went along, though, he continued to graph different areas in the section of the lake he was in.

During the Elimination Round, Martens caught about 18 pounds in the first period, then tallied 23-plus in both the second and third to secure a spot in the Knockout Round for the fourth time in six tournaments.

“I wanted to catch enough to get to the next round,” he said. “As I went on, I tried to save spots and fish as I went. I actually backed off after catching more fish.”

“I’m surprised we didn’t see more 4-pounders,” he said. “I shook a lot off in practice that felt pretty good and I caught quite a few 3s in practice.”

Martens was a bit concerned about the conditions for Tuesday’s Knockout Round. The fish he’d been catching, mostly spots and smallmouth, didn’t seem to bite well under cloudy skies. That prompted him to fish for largemouth more than he had been.

“I mixed it up a little more,” he said. “I caught a few shallow just because I knew I needed to because the spots and smallmouth were unreliable.”

Still, he was able to catch more fish with each passing period – 11, 15, 18 – with his best stretch of the day coming after a 3-hour, 45-minute weather delay after the second period. His 75-01 total weight was seventh-best and pushed him into the Championship Round for the first time this season.

“They bit surprisingly well as dark as it was,” he said. “But as soon as it would lighten up, I would go for spots and smallmouth.”

Martens and Montgomery started fast in the Championship Round and by the end of the first period, it was largely a two-man race to the end.

He spent the first period and most of the second throwing a spinnerbait and a swimbait for some schooling fish and also for those suspended 15 feet down. Once he got to about 47 pounds, he shifted his focus to the finesse game and he was able to finish his day battling the wind, waves and current while hauling in fish on a dropshot.

He said even though Montgomery had opened a big lead after the first period, he remained confident in what he was doing.

“I wasn’t discouraged,” he said. “I made the top 10 and was getting some good points, but at that point I wanted to win. I stayed on them and he slowed down.”

Most of the dropshot fish were stationed in 20 feet of water with two-thirds hugging the bottom and the rest suspended.

“I changed the way I fished every day,” he said. “It was challenging (in the finals). It was tough to gauge and distinguish what you’re looking at. The small fish would school up tight and they would group up and it looked like a nice fish, but it was really four or five of them schooled together.” 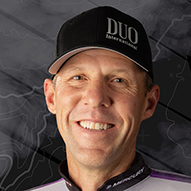