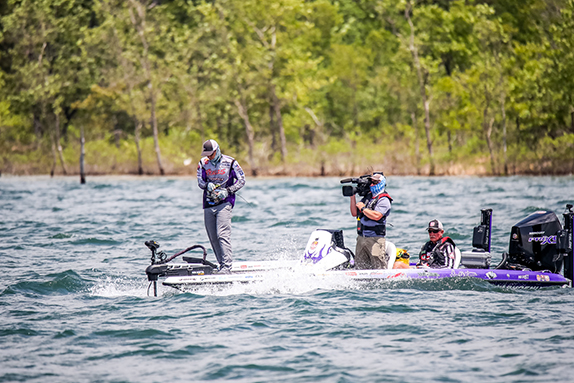 Aaron Martens battled the wind and waves later in the day to come away with the victory at Table Rock Lake.

Aaron Martens sometimes scoffs at being called the best angler in the pro ranks with a dropshot rig tied on. It’s part humility and part the fact that he claims it’s not his favorite technique, plus he’d prefer to not be typecast as a specialist of any kind.

But when the conditions are right – or even when they’re not – and a finesse presentation is producing bite after bite, few, if any, are better.

Martens’ offshore finesse skills were on display again today as his consistency through all three periods was able to outpace Andy Montgomery’s magnificent morning. Martens erased a 15-pound deficit after the first period, overtook Montgomery late in the second and never looked back en route to capturing the win at the Table Rock Lake Bass Pro Tour. Martens and Montgomery both landed 50 bass, but Martens amassed 86 pounds, 4 ounces to Montgomery’s 77-14, nearly 50 pounds of which came in the first period.

It’s the first MLF victory of any kind for Martens, who posted two top-five finishes at Table Rock during his time with B.A.S.S. Martens has competed in every MLF Cup since the organization’s inception in 2011 and he has qualified for eight championship rounds in those events, but hasn’t finished higher than third. His best finish in the first five Bass Pro Tour events was 15th at Stage Three in Raleigh, N.C.

“It’s a huge relief,” Martens said. “I can actually win one. I feel like I’ve accomplished what I needed to do. It’s definitely a confidence builder, but it’s more relief than anything.”

And to do it in quintessential Martens fashion – using his electronics to decipher what he was targeting – made it all the more satisfying. 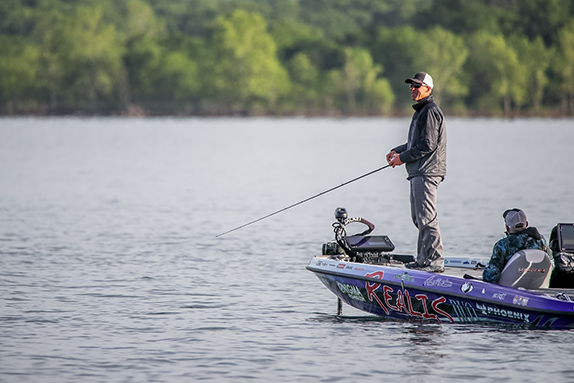 
Aaron Martens had plenty of reasons to smile at Table Rock Lake today.

“I used my graphs a lot,” he said. “I was video-gaming them, which I like to do. I think I’m especially good on my electronics and I’m avid about getting them dialed in and getting them to work perfectly. That goes back to when I had my first boat with a flasher and a paper graph.

"I’m always trying to get everything set up just right and I think I’m pretty good at that. Plus, tracking fish movements – with it being around post-spawn and early summer, once we get out of the spawn, they’re more predictable and I can follow them better with the wind and bait movements That’s what I’m good at.”

Much like he did in the Knockout Round on Tuesday, Montgomery swiftly moved to the top of the standings by seizing on a shad-spawn bite around boat docks. He had 20 pounds an hour into the day and 49-15 (34 bass) after the first period. Martens, meanwhile, started strong with 34-14 (18 bass) over the first 2 1/2 hours, relying predominantly on a spinnerbait and swimbait fished in 15 to 20 feet of water.

Momentum swung in Martens’ direction in the second as he caught 29-10 while Montgomery struggled to maintain the pace he’d set earlier. He managed just five bass for 7-08 in the middle stanza. Martens surged ahead with about 30 minutes to go in the second and by the end of the period, his lead had swelled to more than seven pounds. While Montgomery closed the gap at several points during the third, he couldn’t overtake Martens, who spent the latter part of the day braving the wind and waves on the main lake while picking off bass with some help from his electronics.

Martens finished strong, catching 21-12 in the third to outdistance Montgomery, who transitioned to a bush-flipping pattern to catch 20-05.

Greg Vinson finished a distant third with 68-01, with Mark Rose finishing fourth with 55-06 and Jacob Wheeler taking fifth with 54-11. Eight of the 10 finalists locked up berths in the MLF Patriot Cup, which drew its 30-man field from the top point-getters at the Smith Lake and Table Rock BPT events.

The BPT will take a week off before its next scheduled event May 31 through June 5 at Grand Lake, where the water is more than 11 feet above normal. If it remains elevated, MLF officials could consider postponing the tournament or moving the event to a different venue.

B.A.S.S. two weeks ago postponed an Elite Series tournament scheduled for May 16-19 at Fort Gibson Lake, which lies to the south of Grand, due to flood conditions.

While Martens says he likes the ScoreTracker updates, he admitted Montgomery’s fast start put him on his heels today.

“If I started to fall back too far, I knew where to go to catch a couple quick,” he said. “It’s intense, but it’s part of what makes it so exciting.”

As Montgomery was racking up the pounds, Martens reminded himself to stay with his game plan and stay confident in what he’d found throughout the event.

“What was going through my head was to slow down,” he said. “I had a lot of spots to hit and a ton of good stuff. I knew he probably hit a school of them. 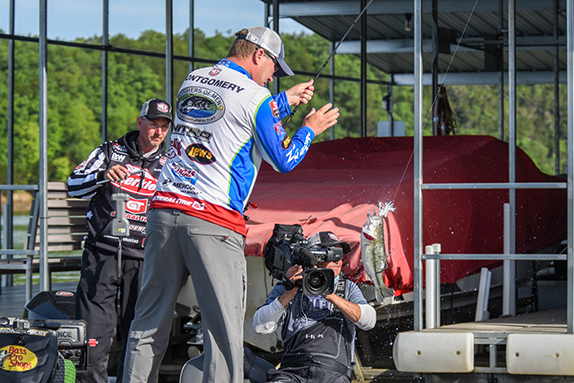 
Andy Montgomery started fast again this morning with nearly 50 pounds, but he couldn't maintain that pace in the second period.

“I’d told my wife it was possible that I could catch 90 to 100 pounds, but the wind got to be too much later on. I knew I was capable of catching a big weight and that he’d hit a wall. It happens here. You can catch so many and then all of a sudden it stops.”

Much of the water in the area where Montgomery had been fishing was unfishable today due to the aftereffects of the storms that blew through on Tuesday.

“I was confined on what I could fish,” he said.

After catching 47-05 in the first period of the Knockout Round on Tuesday, Montgomery was hoping for a similarly productive morning today. It was, but he failed to adjust in time when his primary pattern faded away.

“I knew I needed to get off to a good start,” Montgomery said. “The only thing I’d do differently is I would’ve made the adjustment to flipping bushes sooner. The water came up fast and I thought the fish got out of those bushes, but it was amazing how fast they got back in them.”

As happy as he was to make his first top-10 cut, Montgomery came away feeling like he let one slip away today.

“It’s mixed emotions,” he said. “When you get that close, you want to win. I do this for a living and I made a lot of money this week, so that’s all good.”

He said the timing of the tournament couldn’t have been better for someone who likes to fish the shad spawn. It played right into his hands.

“When it happens you don’t have long,” he said. “Next week, it probably won’t be happening. We just happened to hit it this week and I was able to capitalize on it. It got me off to a good start the last three days and I was able to ride the early morning through the day.”

Vinson’s best areas were also impacted by Tuesday’s storms and that forced him to make some changes. He relied on a vibrating jig most of the day.

“It’s usually a big weakness of mine, but it served me well,” he said. “I caught a lot, but also missed some and lost some on it. I feel like I got better with it because of the number of bites I was getting.

“I was pretty happy with my decision-making. I had areas that got messed up by the storms and I made the best adjustments that I could. There was no reason to run off to another section of the lake. I made the most of what I had.”