BACK
Lee Rallies Up To 10th

Lane Pours It On To Win Marathon KO Round

Bobby Lane caught all 60 of his bass today with a spinning rod in his hand.

It took more than 12 hours to complete, but when the Knockout Round at the Table Rock Lake MLF Bass Pro Tour finally concluded at 7 p.m. CST Tuesday evening, Bobby Lane didn’t want it to end.

Who could blame him?

The easy-going Floridian had just established single-day season-highs with 60 bass totaling 95 pounds, 3 ounces, yet he wouldn’t have minded making a few more casts on the fertile Ozark fishery.

“The more I fished the same areas the more fish I caught – off the exact same spots,” he said. “I had one waypoint where every time I fished it, I’d catch one and it had more with it.”

Alas, the Knockout Round (and Lane’s fun) had to end at some point and following weather delays that totaled 4 hours, 45 minutes, competition for the day finally concluded at about the same time most BPT pros are doing tackle prep on a normal day. Lane won’t have to wait long to get back out there, though. He’ll get his first taste of the Championship Round on Wednesday morning, as will five other competitors.

“I’m so glad to make a championship,” Lane said. “I needed a good event to make the next Cup and this will get me into the third Cup. You want as many cracks as you can at those things. So far, the last three days have been phenomenal. It’s been crazy.”

Zack Birge also clinched his first trip to a Championship Round by rallying from 26th place after the first period to finish second with 86-00 (50 bass), including 40-15 in the third period, which was halted for an hour as a second wave of storms pushed through.

Andy Montgomery was the story of the first two periods as he racked up 50 bass for 78-02 to seize a 10 1/2-pound lead before action was halted for the first time. He wound up third with 83-04 (53 bass) to secure a spot in his first Championship Round.

Jacob Wheeler carded 46 bass for 80-01 in fourth while Cliff Pace sewed up his first trip to the finals with a 58-fish day that totaled 79-05 and put him in fifth.

Jordan Lee, winner of the season opener, caught 66-04 over the final two periods to finish 10th after finding himself buried in 36th after the first period.

Knowing the forecast called for ominous weather to move through at some point in the afternoon, MLF officials informed the 40 competitors during the second period that a minimum two-hour weather delay would go into effect at the conclusion of the period. Some anglers opted to return to the launch ramp and trailer their boats. Others sought shelter at various locations around the lake. Some took a lunch break.

When action was halted, Montgomery held a 10 1/2-pound lead over Lane, who was second at the time, and a lead of 28-12 over Jacob Powroznik in 10th. The two-hour stoppage turned into a 3-hour, 45-minute delay.

Once fishing resumed – and even after the hour-long stoppage 40 minutes into the third period – the action picked up immediately. Five anglers caught 20 or more bass in the third period and seven eclipsed the 30-pound mark as the 40 anglers combined to catch an event- and season-high 548 bass over the final 2 1/2 hours. 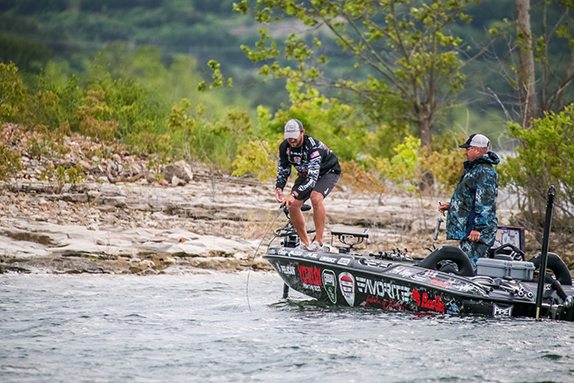 While Lane was busy overtaking Montgomery, Birge and Lee were marching their way up the leaderboard. Birge started the third in 14th place, a little more than four pounds out of 10th. He quickly erased that deficit and forced his way into the top 10.

“I got on a dead stretch (in the first period) and got a little behind and had to fight my way back,” Birge said. “I went to another stretch of bank a half-mile away and the wind was blowing in on it. The fish were active and feeding.”

Wind-blown banks seemed to be the key for him throughout the latter part of the day.

“I fished a lot of new water that I hadn’t fished yet and I kept running into them,” he added. “It’s a pretty solid bet that if you fish a bank with wind on it, you’re going to get bit.”

He’s hoping for a breezy finale to give himself a shot to win, but he’s thrilled to finally advance from the Knockout Round.

“It feels so good,” he said. “It’s real hard to make the top 10. It’s a lot harder than I expected it to be. Going from 40 to 10 when everybody is dialed in, it’s hard. I’ve been close before, but it feels good to finally make it.”

Meanwhile, Lee spent the latter part of the day in a six-way battle for one of the last four spots in the top 10. He climbed as high as eighth in the final 15 minutes, but eventually edged Gerald Swindle by 2 1/2 pounds for 10th.

“After the first period, I was so far out of the cut, I put it in my mind that I wasn’t going to worry about the cut line,” he said. “I needed to get on something quick. I knew I wasn’t out of it, but I needed to catch ‘em really good the next couple periods.”

After the first delay, he began targeting smallmouth, which had been his main plan coming out of practice.

“I went to two different creeks and just ran a pattern and picked up where I left off (after the second period),” he said. “I kept running new water. I caught spots and largemouth, too, but most were smallmouth.” 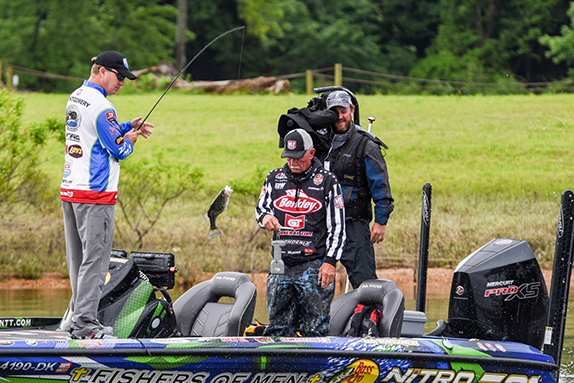 
Andy Montgomery caught an average of 10 fish per hour over the first two periods today.

With the weights zeroed for the final round, Lee feels like he’ll have as good a chance as anybody to win.

“I’m pretty excited about tomorrow after ending on two good periods today,” he said. “I feel like I won’t be able to go back to the same water and catch fish, so I might have to run around and look for new water. Still, I feel good about it. I caught a lot in short amount of time today and I think it’s going to take a lot of weight to win.”

As the third period wore on and his place in the finals appeared secure, Lane opted to chase more bites on a stretch he likely won’t come back to.

“I went to a spot I’d been fishing with Michael Neal and I have no reason to fish it tomorrow because it’s been pretty well beat up, but I went through it and bam, bam, bam,” he said. “There are a couple spots I didn’t even hit today that are just as good or better. I just hope it continues tomorrow.”

It’s been all spinning tackle for Lane since midway through the Shotgun Round.

“If I have a shot to win, this is it – what I’m throwing and what I’m doing,” he said. “The fish just love it. I feel like I can go behind anyone and catch three more than them on the same stretch.

“I was skipping bushes and shallow stuff earlier on but with the water dropping, the key was killing them on the first day and not having to catch as much on day 2. When I did go shallow, I saw it slowing down so I picked up on the pattern I saw on day 2 of practice. I didn’t have much time to run it, but it allowed me to start practicing yesterday at 10 a.m. Now that I had it figured out, it’s all about catching as many as I could. It just built some more confidence for me.”

Nobody had more confidence going early today than Montgomery, who boated 31 bass for 47-05 in the first period alone. He was the first angler to crack the 50-pound plateau as he tacked on another 30-13 in the second.

“It was a good day and once I felt like I had it made, I went looking at the end of the day,” he said. “We had as good of fishing conditions as you could possibly have (early on), but I think tomorrow could be more challenging.”

Much like Birge and Lane, he said the wind and cloud cover aided the pattern he was working.