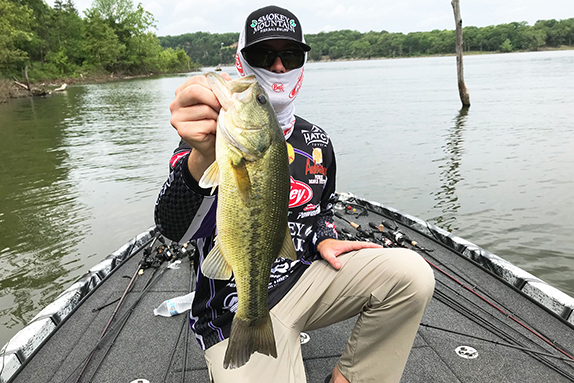 Josh Bertrand averaged nearly eight fish per hour during the Group B Shotgun Round.

Josh Bertrand’s previous best day on the MLF Bass Pro Tour, both for fish caught and weight, came during the Shotgun Round at Smith Lake, where he tallied 25 bass for 38-13.

He blew those totals away in the third period alone today.

Table Rock Lake continued to produce at a mind-boggling rate Saturday as Group B got its first taste of the Ozark bass factory. Bertrand led the catch parade by breaking single-round records that had stood for … all of 24 hours. The Arizona pro tallied 59 bass for 89-05, squashing the marks put up by Greg Vinson (52, 83-06) during Friday’s Group A action. A dazzling third period accounted for roughly half of Bertrand’s totals as he caught 31 bass for 47-06 over the final 2 1/2 hours. His third-period weight alone would’ve been enough to put him in 17th place in his group.

“I don’t know how many times I’ve caught that many, but it’s always fun to do and it’s extra fun doing it here in a tournament,” Bertrand said. “This is the perfect place to do it. It was a dream day.”

Five other anglers totaled 70 pounds or more as Group B amassed 1,133 fish, falling just short of the 1,172 caught by Group A. That’s an average of 153 fish per hour over the first two days.

“It was definitely a good day, a fun day,” said Ott DeFoe, who led after the second period before fading to second with 78-02 (55 bass).

Andy Morgan is an ounce behind DeFoe in third after catching 50 bass. Bobby Lane hauled in 51 that weighed 73-07, which has him in fourth, while Cody Meyer carded 39 bass for 70-09 in fifth.

When Group A returns to the water Sunday, adjustments could be in the offing as a band of violent storms was due to push through the Branson, Mo., area Saturday evening. Nearly two inches of rain is expected and a tornado watch was issued for much of the area around the Missouri-Arkansas border, which forced MLF to cancel all of its evening fan engagement activities.

Bertrand’s two most recent trips to Table Rock resulted in top-10 finishes (Bassmaster Central Opens in 2015 and 2017) so he’s starting to develop a soft spot of the scenic reservoir.

“First off, it’s beautiful and it’s huge,” he said. “It spreads out well and the whole thing fishes well with all three species. It all adds up to being a lot of fun.”

Bertrand got off to a strong start with 16 bass for 21-03 in the first period. He tacked on 12 for 20-12 in the second to remain in fifth place before he lit up ScoreTracker in the third. He said being in Group B this week made him a bit uneasy.

“Sometimes you’re unsure if the fishing is good or not and you want to see (what Group A does),” he said. “In this case, we all knew it was going to be good. I was squirming around Friday at the Expo and at the house. I was dying to get out there. I remember when we went to Jordan and Falls [in Raleigh, N.C.] no one knew what it would take. At this one, I just knew it would be a lot and I was bummed I was in Group B, but it’s all good now.”

He said he moved around a fair amount and the bulk of his fish didn’t come off one little spot or stretch. That was important, he said, as he’s still trying to gauge what it will take to be consistent through the event.

“It’s going to be hard because over six days so much can change,” he said. “Having stuff to yourself will be a big deal as always and staying open-minded (will be key). I’m definitely looking forward to try to learn a few more things. The lake has been falling consistently and with this storm coming, we don’t know what it will do to the water. I’ll be shocked if someone can roll through this doing the same thing four of the six days.” 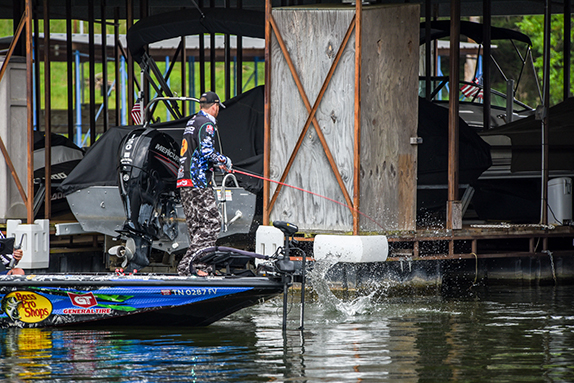 DeFoe started fast with 23 bass for 32-02 in the first period. He shook off a slow start to the second period to add 16 for 24-07 to move into the lead entering the final stanza. He tallied another 16 bass for 21-09 in the third to surge toward the 80-pound plateau.

“It was wonderful,” he said. “I wasn’t going to catch Josh toward the end and I was not near the cut line, so I tried to catch every fish I could. That’s one less I’ll have to catch in a couple days. Things will change so that gives me the ability to practice and stay ahead of them.”

He went 70 minutes without a fish in the second period, which prompted him to change tactics. After making the move, his longest dry spell was seven minutes.

“I caught them today exactly how I got bit in practice three days ago,” he added. “For that to happen this time of year, that’s weird to do. I thought I’d get bit the same way in the morning, but my other deal, I didn’t know it would be as good as it was. Certainly, it was good, maybe better than it was in practice.

He’s curious to see how the rainfall Saturday night impacts the areas he’s focused on.

“The rain will call for adjustments either way,” he said. “I think my morning deal will be fine and my other thing could be good, but it could make it pretty hard, too.”

Digging out a hole won’t be easy at Table Rock with the multitude of 2-pounders that are available. Marty Robinson proved it can be done, though.

“When you catch ‘em good in practice and know the weights are going to be high and you’re in Group B and they catch ‘em good on day 1, that just reinforces what it will take,” Robinson said. “So you go out thinking you’ll need 40 pounds. When you know you have to catch a ton and you’re not catching them, I got spun out. I got into too high a gear. It’s a good thing we have a break after each period because I probably would’ve passed out. I was stressing.”

After gaining some of his confidence back in the second period, he made a 30-minute run to start the third, knowing he’d likely tumble down the leaderboard as others had their lines in the water.

“I figured it would cost me five pounds with how guys were catching them,” he said. “I decided to make the run and it was a good choice. When I got there it was on fire. They were really biting and I finally got out of panic mode. I know where I’m going to start Monday.”

Group B Shotgun Round (Day 2) Results