Records Fall As Vinson Sets Pace In Group A 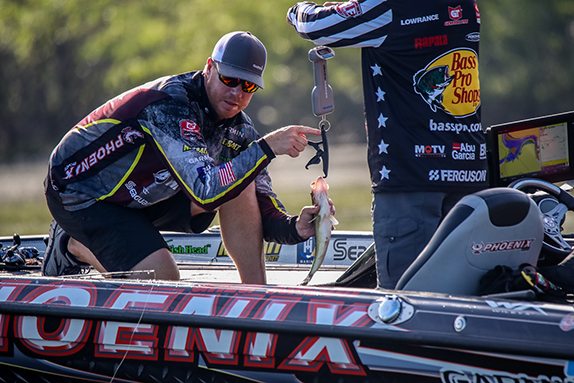 Greg Vinson weighs and releases one of his 52 bass today at Table Rock Lake.

As Greg Vinson was adjusting his bait after landing his 50th bass of the day this afternoon, he pretty well summed up how his Shotgun Round went at Table Rock Lake.

It was a perfect description of a day that saw a Bass Pro Tour single-day record 1,172 fish caught by the 40 anglers in Group A. Vinson set the pace with 52 bass that weighed 83-06, setting BPT records for single-round totals in both categories.

“I can’t remember a day where I’ve caught them at will like that,” said Vinson, who’s coming off a 50th-place finish at Smith Lake in his native Alabama. “I’d get off them and try something different and start catching them again. Then I’d try something else, pull up and catch them there.”

Variety was the theme for Vinson, who said he didn’t see another BPT competitor through the course of the day, a rarity. He estimated using six or seven different baits to amass his total. Consistency was his strong suit, as well, as he caught 17 bass in both the first and second periods, then tacked on 18 more in the third.

“In this format, you have to develop a plan to get bit all day on a fishery like this,” he added.

Seventeen competitors caught 50 pounds or more, leaving open the possibility that the top-20 cut on Sunday could be at least 100 pounds. Eighteen anglers caught at least 30 fish today. Casey Ashley occupies the 20th spot after today with 47-01 (31 bass).

Anglers rang up eye-popping totals under sunny skies as temperatures climbed into the upper 80s. Things will cool off Saturday as a band of thunderstorms moves toward Branson, Mo., later in the day with more rain in the forecast for Sunday when Group A returns to the water for its Elimination Round.

Prior to today, Vinson said the only notable record he’s held in bass fishing was a dubious one and it came at another Ozark fishery – Bull Shoals Lake – where he recorded the biggest single-day drop by a leader in the Elite Series (first to 23rd) in 2013.

While Pace was the first one to reach 50 bass today, Vinson is happy to have his name on a couple more memorable accomplishments.

“These are good kinds of records to have,” he said. “They’ll probably get broken this week or later this year. This lake is just full of fish all up and down it. It’s set up really well for us.”

He’d intended to target some shad-spawn fish right away this morning, but could not trigger any bites. As other anglers’ catches began to hit ScoreTracker, he punted on that idea and moved to something else.

“It was miserable,” he said. “I couldn’t get them to do anything. I decided to get out of it and it was the best decision I could’ve made. My next few stops were good and I was able to make up the deficit.”

After catching 52 bass – he also caught 15 to 20 more that didn’t meet the 1-pound weight requirement – he was surprised his biggest of the day was just a 2-13.

“I had bigger bites in practice and I missed a big one today,” he said. “In the type of areas I was fishing, I’m surprised I didn’t catch a 5 or 6 mixed in.”

Looking ahead to Sunday, Vinson hopes to be able to expand on some of the areas that produced today. He knows he won’t have to catch another 80 pounds to make the Knockout Round, but he wants to identify other viable options for later in the event.

“It doesn’t take long to fish the areas I did well on today, so ideally, I’ll be able to expand and add some options to work with,” he said. “If one thing is not working, I can jump to something else because you have to keep catching them here.” 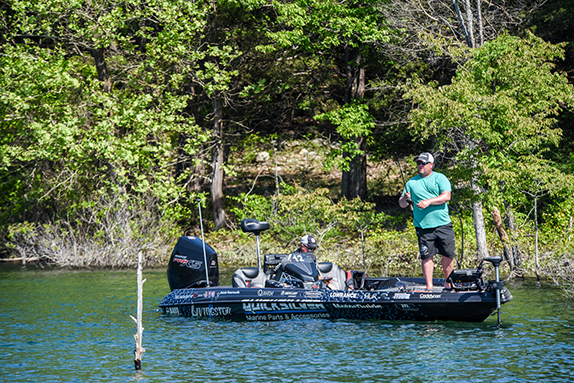 After posting a win at the third BPT event at Raleigh, N.C., and finishing fourth at Lake Chickamauga, Powroznik struggled at Smith Lake, where he was 58th. He figures to be a factor again this week with bass in various stages of the spawn. Powroznik, a noted sight-fisherman, said there are plenty of fish still in visible spawning areas, but the ones he’s after are off the bank a little further.

“Some you can see, but those aren’t the ones to target,” he said. “The ones that are spawning a little deeper will bite every cast in 5 to 6 feet of water. If you get it near them they’ll run over to eat it.”

He’s not concerned so much with catching bigger fish – his biggest today was 2-15 – it’s all about generating consistent bites. A trio of techniques – bed-fishing, topwater and shaky-head – produced the majority of his bites today.

“It’s the time of year,” he said. “I have seen some big ones, but they’re hard to fish for right now. You can’t spend an hour on one fish. I’m around some of the right ones, but in this format it’s not about catching just big ones. It’s mind-boggling how many fish were caught today.”

Like Vinson, he’s hoping to secure his spot in the Knockout Round fairly early on Sunday so he can map out other options for later in the tournament.

“If I catch 20 pounds, I’ll be pretty much in,” he added. “The best thing is I can ease into it. The shad ought to start spawning and that will be a crucial deal. If I can run new water and maybe find a shad spawn to go with what I had, that’ll be good.”

Pace had a hunch Table Rock was going to produce some of the biggest catch rates and weights of the season even back when it was announced as a stop on the schedule. His practice and today’s outcome served to confirm his suspicions.

“If you get around them and can get some bites, but they’re not everywhere like that,” he said. “I had two flurries. I had a really good first couple hours and then an hour in the middle of the day. Outside of that, I grinded around and caught fish, but didn’t light them up.”

Sprague, who came into the event second in Angler of the Year points, said he didn’t see as many big fish today as he thought he would, but he made the most of the areas he focused on. He relied on one technique mostly and it was productive at various depths.

“I ran around a lot in practice and fished for short spans in many areas,” he said. “It didn’t matter where I stopped or whether the water was clear or dirty, I could get multiple bites doing anything you wanted to do. I decided to fish for the fish that were the healthiest rather than some of the fish that were done and weighed lighter.”

As good as today was, he knows he needs to be prepared for the changes that are sure to transpire between now and next Wednesday when the Championship Round takes place. That’s why it’s important to him to have a strong start to the Elimination Round on Sunday.

“If you can get to 100 pounds, that should do it,” he said. “You have to manage fish here and checking to see where some fish are going. The span of this event at this time of year, they’re going away from you. They’re not coming to you.”

> The previous single-day high for total fish caught was 872 set during the Knockout Round at Lake Chickamauga last month.

Group A Shotgun Round (Day 1) Results