ScoreTracker Will Get A Workout At Table Rock 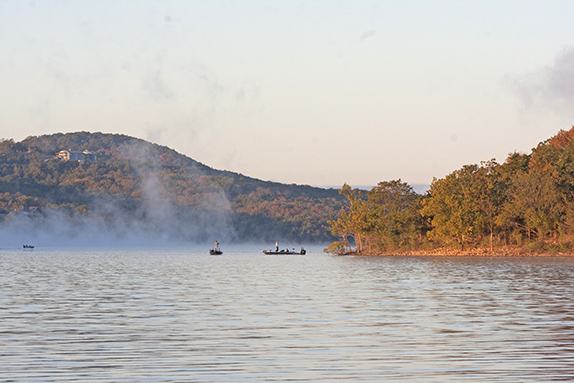 The way Table Rock Lake is fishing, crowding in certain areas likely won't be an issue.

If the outcome of the Central Division FLW Series tournament at Table Rock Lake last week is any indication of what’s about to transpire during the MLF Bass Pro Tour, prepare for the ScoreTracker system to light up with uncommon regularity, much like it did at Smith Lake a few weeks ago – maybe more.

Quantity of fish will not be an issue for any of the 80 competitors this week. The quality bites – anything over 3 pounds – is what will separate the contenders from the pack and those seem to be in ample supply as well. The water was recently as high as 4 1/2 feet above normal pool, but it’s been slowly falling. Still, it has inundated countless bushes and other shoreline cover with enough water to draw in a good number of fish.

Sight-fishing was among the methods FLW Series anglers hoped to seize upon last week, but weather conditions prevented it from being an all-out sight-fishing bash. There could be a bunch of “stragglers” or possibly another wave of spawners, but the vast majority of bass are rounding into their post-spawn phase.

Table Rock should also provide the field with myriad options depending on what an angler’s strengths or preferences are. Want to flip brush and bushes for fry-guarders? That should be available. How about throwing Ned rigs on points for smallmouth? Got that, too. Have an itch to target spotted bass chasing shad to the surface? That’ll be in play as well.

It’ll be a pick-your-poison event to be sure, and with more than an inch of rain forecast to fall on Branson, Mo., on Saturday, it looks like the high water could be here to stay for several more days. It’s possible that Bass Pro Tour season highs for fish and weight caught in a period, round and event could come from Table Rock.

Just about everyone in the field comes into the week with some semblance of experience at Table Rock, one of the bass fishing jewels of the Ozark Mountains. The Elite Series had two events there (2006 and 2014) and the FLW Tour has visited three times (2009, 2010, 2012). The winners of four of those five tournaments are in the field this week.

Before getting into more about the bite, here's the lowdown on the lake itself.

Rick Lapoint, a former winner of the BassFan Army Weekend Warrior Championship, has guided at Table Rock for many years and said his best success recently has been with a 3-inch swimbait threaded on a modest-sized ball-head jig.

“The crankbait bite hasn’t picked up,” said Lapoint, who operates Capt. Rick’s Guide Service. “The lake is just coming off the spawn and the fish last week were in the post-spawn funk. We were catching fish, but not the numbers they’ll need in the MLF event.”

Earlier this week, the numbers started showing up, as a guide trip produced 50 bass in the 2- to 2 1/2-pound range.

To target bigger fish, Lapoint says the flooded bushes will attract the most attention. Post-spawn largemouth will also tend to hang around under boat docks.

“Those are going to be harder to catch,” he said. “It’ll be one here and one there, but that’s how the Costa (tournament) was won.”

Lapoint expects all three species to play a factor this week with the largemouth eventually prevailing over the more numerous spots and weather-sensitive smallmouth.

“Up until last week, we had some of the best smallmouth fishing we’ve ever had on the lake,” Lapoint said. “If we have some cloudy weather it’ll be very good, but unlike they do on northern lakes, when it’s sunny and calm they don’t bite.”

Lapoint said he’d choose the James River over the White right now because the water is a little murkier and fish are biting in the dingy water. 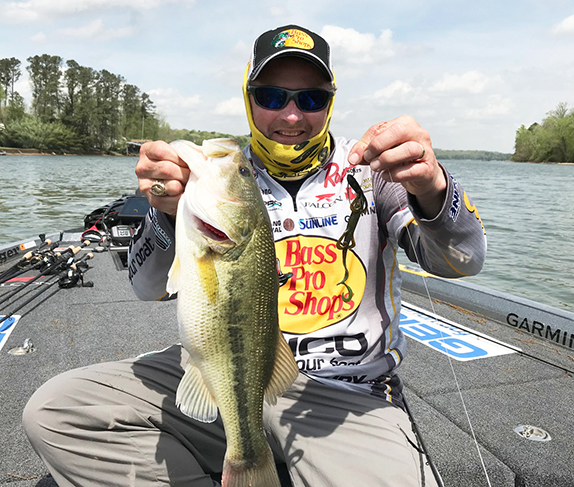 
Mike McClelland is hoping to be smiling more this week than he has during the first five events of the Bass Pro Tour season.

“If you can get around some stain, you’ll be around some fish,” he said. “These are favorable conditions right now. There will be guys with 50 pounds no problem on the first day. If someone can get on a school, it’ll be lights out.”

Notes from the Field

Mark Daniels, Jr.
“Wednesday was my first time ever seeing the lake. There are plenty of bites to be had, but that’s the case a lot of times when we show up even though they just had a Costa here. Things are changing drastically, though. There are definitely spawning fish and definitely post-spawn fish.

“This time of year makes it difficult because you have to decide if you want to target spawning fish or post-spawners. You go up and cruise the bank and see a few on beds, then move out and catch a few nice ones. You can get spread really thin and you have to find a happy medium. I think I’ll do both, but it’s all subject to change on the fly.

“With the lake being so big, I tried to get in a situation that I felt was a high-percentage area and where I could get some bites. I marked other places along the way that could be good, so we’ll see. You are going to have to catch a lot of fish. I see the cut weight being close to 80 (pounds), which could be our highest cut weight yet.”

“Things do change and you notice it more with this format because of the off days. When you’re not fishing consecutive days where a pattern may not hold up, you have to be prepared for something to be different. With the water temperature coming up, those fish on the bank will be moving out and those who’ve been out will start to feed up more.

“What I’ve run into is this is such a big lake and only having 1 3/4 days of practice, it’s hard because I always like to know that when I make a decision it’s the right decision. There are three distinct areas here and I like to cover everything so when I choose what to do it’s the best of what I have. You can’t do that here, so I didn’t try to cover the whole lake, but everywhere I went the fish seemed to be biting.

“There are going to be some bigger fish caught in this one (compared to Smith). There will be more 5-pounders and a lot more 2s and 3s. The spots that are biting here are bigger than the ones at Smith and there’s a healthier population of largemouth, too.”

Terry Scroggins
“(The fishing) is really, really good for our format. It will be the highest weight tournament of the year without a doubt. I don’t know if it’ll be me, but my practice went fairly well.

“The key, to me, is you’re going to have to cover as much water as you can. You can dig a hole real quick because fish will get caught quick. You have to be on them the whole period all three periods because this will be a slugfest. In some events, you can make up for a bad period, but I don’t think you can do that here.

“Being in the B group, I feel like I’m on a bunch of good areas, but I won’t know if it got hit or not Friday. I’ll have to make quick decisions and hope they’re there.”

Fred Roumbanis
“We’re going to catch ‘em. This one scares me, though, because everybody can catch ‘em and it doesn’t matter what you do. The bite is good everywhere, it seems. If you get behind, I feel like you’re going to have a hard time catching up.

“Two things that I need to control is not letting ScoreTracker get to me and not let my head get messed up by ScoreTracker. I’m going to put my head down and fight for it. I think it’s going to take 50 to 55 pounds each day to move on. I timed myself in some of the places I stopped. If I can get six bites an hour and land four, that’s 48 pounds.

“I’ve been here in the past where you can sit on a spot and catch ‘em every cast. I haven’t found it yet, but guys will find that and those are the ones who will be scary. I’ve found some better fish but not every cast.”

Randy Howell
“Conditions on the lake are the best I’ve ever seen them. There are lots of fish in multiple modes from pre-spawn to spawn to post-spawn. The water is high and falling, but it’s a good level to catch fish in lots of depths and the lake is fishing really big, so I expect to see record weights on ScoreTracker.

“This lake is chock full of 2- to 3-pounders, so I predict the highest cut weight ever for the top 20 in each group.”

> James Watson – A lakeside resident at Table Rock, Watson is coming off his first Knockout Round cut of the season. While others have experience at the lake, few possess the history that the jovial Watson does.

> Mike McClelland – If anyone needs a home game it’s McClelland, who has yet to make a Knockout Round cut this season. He won the Elite Series at Table Rock in 2014 as well as a Bassmaster Open in 2017 and recently built a new home overlooking the lake. He also finished 2nd in an FLW Series there last April. As much as he’s struggled this year, he’s among the clear-cut favorites this week.

> Todd Faircloth – A past winner at Table Rock (2006 Elite Series), Faircloth is fresh off two straight top-5 finishes (Lake Chickamauga, Smith Lake) and is trying to track down Edwin Evers in the Angler of the Year standings. Versatility is key at Table Rock and there is very little Faircloth can’t do.

> Gerald Swindle – If it’s a junk-fisherman’s tournament, overlooking Swindle is a mistake. He can mix it up with the best of them and he needs another solid finish to creep closer to the top 30 in points (he’s currently 43rd).

> Jeff Kriet – He’s currently 34th in points and has a good track record at Table Rock (7th in 2014). If there’s a finesse bite to be had – there always is at Table Rock – don’t bet against the Squirrel.