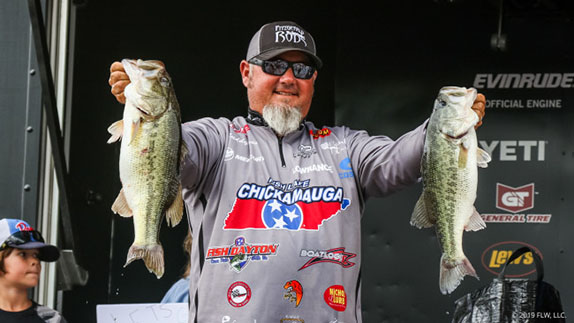 Buddy Gross delivered the high finish that was expected of him at Lake Chickamauga.

There was no shortage of ways to catch a bass at the recent Lake Chickamauga FLW Tour.

Sight-fishing, shad spawn, offshore, cypress trees, running the bank – all of them were in play, and all were represented among the top 5 finishers. Ultimately, John Cox toughed it out and adapted up shallow to pull out the victory, but if not for two late keepers with minutes to spare, it would’ve been an entirely different pattern that reigned supreme.

Here’s a look at how the rest of the top 5 adjusted and fished to their strengths.

Being a local favorite can be a blessing and a curse, as Gross found out this week.

“I’ve never been so stressed in a tournament in my life,” Gross said.

Not only did he have the pressure to do well, but he also had so much history it was hard to whittle it all down. That said, he committed himself to fishing away from the bank, eventually focusing on 15 places he considers transition spots coming out of spawning pockets, particularly gravel points in 6 to 8 feet of water.

That history did come in handy, though, because all the big schools of fish he found were also found by other pros. So instead, he could focus on the smaller places where he might only catch one or two fish, but they’d be the right size.

Another big key was his ability to adapt to the fishing pressure.

“The fishing pressure actually helped me,” Gross said. “There’d be so much pressure on the good spots it’d push the fish off. I knew where they’d relocate 50 or 75 yards away.”

Ultimately, Gross never felt he was on the fish to win or even make the top 10, as he says he only got one giant bite all week and it broke him off on day 2. So finishing 2nd, he was quite proud to be able to handle the pressure and adapt as he did.

> He threw the swimbaits on either a 1-ounce Scottsboro Tackle Recon Swimbait head or a 1/2-ounce Owner Flashy Swimmer.

> Main factor in his success – “Having the history I have here. Just knowing those ‘ugly’ places where I can get one or two good bites instead of having to fish in a crowd on the better places.” 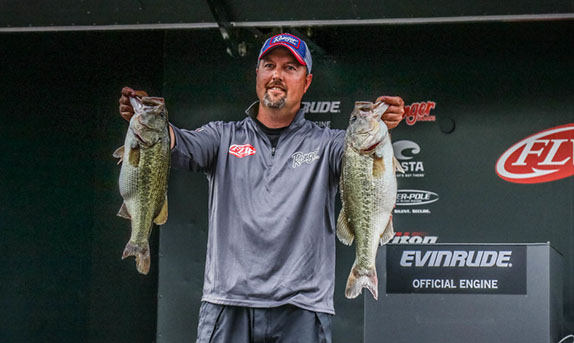 It was all about the kickers that did or didn’t make it to the boat for Nelson.

When he caught them on days 1 and 3, he brought in the fourth- and second-largest bags of the event, respectively. Yet, sandwiched between those banner days were days when he lost those big bites (day 2) or the big fish simply wouldn’t open their mouths (day 4).

Ultimately, Nelson managed to put himself in contention by doing a little bit of everything.

“I had a really good practice focusing on transitioning fish,” Nelson said. “But the first morning, I started on the shad spawn and then I started seeing all these big bedding fish, which was the least of what I’d focused on in practice.”

Hence, Nelson adapted and focused mainly on spawning fish the rest of day 1 and most of day 2.

On day 3, he started out on an offshore spot for the majority of his morning, trying to make it go. It never really did, so once again he went shallow and caught three good fish late (one off a bed, one cruising and one cranking).

Realizing the majority of his bigger fish were coming closer to takeoff, he hung tight and did a little offshore fishing, but the heartbreaker was when he went bed-fishing and found a pair of 10-pounders and a 6-pounder that wouldn’t eat.

“The sun never came out to really lock them on and make them aggressive,” Nelson said. “The 6-pounder and one of the 10-pounders, they got so close they could probably taste my bait. They just never opened their mouths. Just the way it goes sometimes.”

> He also used the same setup but with a wacky-rigged Senko on a 1/0 Gamakatsu hook to pitch to various targets he could see while up shallow.

> He also mixed in a 3/4-ounce XCalibur rattlebait (silver-and-black).

> Main factor in his success – “Just being versatile and adapting as I went.” 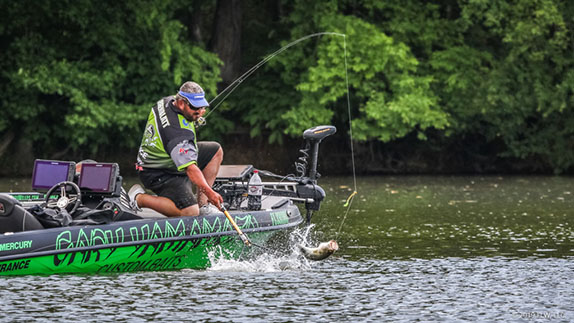 
Matt Greenblatt camped out in a single area for all four days.

It was his “little area that almost could,” and had it not been for a lost 10-pounder, Greenblatt’s tiny grass flat would’ve been the winning area.

In practice, the Florida pro wanted to find something that reminded him of fishing back in his home state. Sure enough, he found a grass flat up the river in about 1 1/2 feet of water that was no larger than 150-by-150 yards.

He tried to find other places like it in practice, but he never did. Thus, he made the decision to camp out in there all four days. In there, he used just two lures all week: a wacky-rigged Yamamoto Senko and a 5-inch Zoom Speed Worm.

To his surprise, the plan nearly was the winning ticket, as he led after day 2 and nearly was leading after day 3. However, on the final day he “boogered” a fish he figured was close to 10 pounds – “the biggest one I had hooked all week.”

> Main factor in his success – “Fishing to my strengths. I’m not John Cox – I’m not a sight-fisherman. I’m not an offshore guy. Power-Poles were also big because they allowed me to quietly fish an area before moving and camping again.” 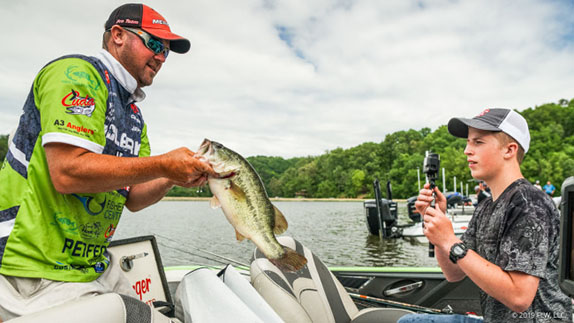 
David Dudley did the majority of his work with a wacky-rig.

There is no time of the year Dudley enjoys fishing more than early May, regardless of the fishery.

“The bass are shallow and you have the bream beds and the shad spawn,” Dudley said. “I can throw my wacky-rig. I’m happy.”

Sure enough, Dudley did a lot of damage the first three days up shallow with a wacky-rig, hitting various shallow targets while going down the bank. However, he also did quite a bit of flipping, particularly to trees that were a bit too snaggy for his wacky-rig, which is actually how he got the majority of his bigger bites.

All four days, Dudley started on a shad-spawn pattern, entertaining everyone on live coverage when he caught a surprise 8-pounder on a white swim jig, but the real entertainment came on day 4.

Figuring his shallow bite couldn’t produce a big enough bag to compete and catch up to the offshore guys, he also moved away from the bank, finding a spot where he was literally calling his shots with a square-bill crankbait. Unfortunately, he just never got a big bite.

“Chickamauga reminds me of Lake Okeechobee,” Dudley said. “You catch a lot of 3-pounders, and then you need a giant kicker. I had that the first few days. Just never got that bite on Sunday.”

> Main factor in his success – “Being versatile. I felt I really moved with the fish. It may have been won up shallow, but I still think I moved how I needed to move.”