BACK
The Wilks Rig?

Buggin' For Shallow Bass With A Creature Bait 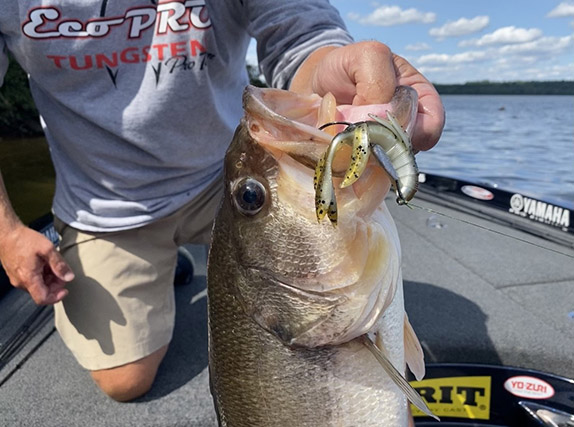 Rigging a creature bait in the manner of a soft-plastic swimbait and reeling it quickly is effective anytime bass are in shallow-ambush mode.

I happened upon a new technique that works incredibly well and shows fish yet another “something new." I’ve been using this method, mostly under wraps, for about 5 years now. I’m convinced now, after using it for so long, that it could become a mainstay when bass are in shallow-ambush mode. So get ready – you'll need yet another rod rigged with braid on hand.

Simply rig a flat-shaped Culprit Incredi-Bug with a weighted swimbait hook, stiff rod and 50- to 65-pound braid. I like a 5/0 or 6/0 hook with quarter-ounce of weight on the shank most of the time, changing up based on conditions. Swim it, buzz it, burn it and stop it – it's irresistible to bass. It will even walk underwater if you put a slight crook in the plastic.

Occasionally, I’ll add a small Eco-Pro Tungsten weight on the nose as well if I want it to drop it nose-down into cover. The clearer the water, usually the faster I go with it. Although this is primarily a largemouth lure, I’ve caught some really nice smallmouths and spots on it that were hiding on undercut banks and docks.

I call this new technique Buggin’ because the bait I use is a Culprit Incredi-bug. Or maybe we should call it the Wilks Rig to go along with all the crazy new rigging methods out there. This is the first new one in a while that is actually geared to power fishing, which so many of us love.

The Culprit Incredi-bug is key to this method because of the action and shape. While it's called a bug and may sort of look like a crawfish, I’m convinced it represents a bluegill fleeing or injured on its side in shallow water. The action of the flappers of this bait are not overly aggressive; in fact you need a little speed to get them going good. By design, the flappers are not at all wild, but rather perfectly imitate the kicking motion of the tail of a bluegill when panicked. I’ve tried some other baits with wilder action and they tend to slow the bait down and have an unnatural look when fished really fast.

I basically use this bait in and around shallow cover, especially when the bluegills are spawning, which in some lakes seems like half the year. It skips and casts amazingly, since it is a heavy bait on its own. This Wilks Rig or buggin’ technique (whatever terminology sticks) gives you another option in conditions that are good for swim jigs and frogs. If there is a lot of fishing pressure on the lake, you can go behind other anglers with a totally different look and catch lots of fish. Basically, this is offering the bass a different look to react too. Fishing it at speed around shallow cover produces awesome bites that rival those of buzzbaits.

With the Culprit-Incredi-Bug, I tend to catch bigger than average size bass, since the bait is so bulky. With the bulkiness comes specialized gear. I like a 7’3” Falcon Amistad Rod for its great backbone, yet flexible enough tip to cast and skip around easily. One hundred precent of the time I use it on 50- to 65-pound Yo-Zuri Braid. It is much like a frog – you have to have no stretch to inhibit a good hookset, especially in the crazy places you can cast and skip this bait.

If I’m strictly covering water, I like the swimbait hook by itself, with no other weight, as this looks most like an injured fish with horizontal posture in the water. If the lake is up with flooded cover or bass are spawning, I peg different sizes of Eco Pro Tungsten weights to the nose, depending on thickness of cover and what I’m trying to accomplish. I admit it looks a little funny, with the knot from the swimbait hook making a little separation, but this will allow both the swimming technique with a nose-down posture into light cover where you might suspect a spawning fish. With the added weight, you're just giving the method an extra use – I’m still mostly swimming it and dropping it into appropriate cover. If all the fish are in the cover, another straight flipping bait like a jig or worm may be better ultimately, but it's hard to beat the amount of water you can cover with this method. Most importantly, they eat it.

By far, my favorite color is one called molting craw, as long as the water is not too stained up. It has a pearl belly with a watermelon back, imitating nearly everything bass eat. In more stained or brown water, I use Bama bug, Okeechobee and black and red the most to help them find it. The darker colors are also excellent around the bluegill beds, as many bluegill get a very dark coloration from the bright sun.

The Wilks Rig is sounding pretty “catchy" now. huh? Give it a try and you’ll be having fun buggin' big bass in the shallows.