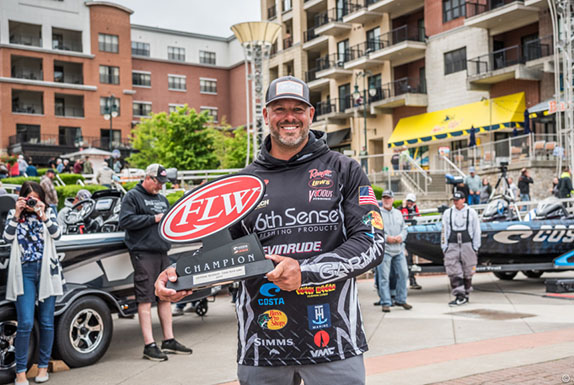 During his 19 years as a full-time guide on Table Rock Lake, there was one small pocket that he'd never ventured into prior to Saturday. After it surrendered the fish that provided his winning margin in the Central FLW Series event on the big Missouri impoundment, he's sure to go back.

"It's one of those places that's just kind of an ugly spot, if you know what I mean," he said. "It's just a real flat bank, but the water was up and it had the right amount of water in the bushes. I thought there might be a smallmouth in there because it was real close to some stuff I'd been fishing."

He glanced at the pocket as he was driving back to the launch on day 3 with approximately 16 pounds in his livewell. His smallest fish was a 2 1/2-pound spotted bass.

"I whipped over there and made one cast (with a topwater), and a 3-pound smallmouth ate it. That won the tournament for me."

Indeed, the additional half-pound gave the former FLW Tour pro from Lampe, Mo. a 5-ounce triumph over current Tour competitor Dakota Ebare. His three-day total of 46-03 gave him what was by far his biggest tournament victory on his home water.

"I've come close a few different times. In the PAA event several years ago, I had some issues and had to take a 5-pound deduction. Without that, it would've been real close between me and (winner James Watson, a Major League Fishing pro and fellow Table Rock local), but we're still great friends."

Olliverson conducts as many as 400 guide trips on Table Rock annually – often three on a single day. He'd set aside several days for practice leading up to the Series event, but it turned out that he didn't need them all.

"I saw enough in one day to know what I was going to do," he said. "The rest of the week, I didn't feel like I needed to be out there.

"Having so much experience on the lake, I can go out and see a few things ... this place will have them and this other place won't. I saw that the smallmouth game was on – I was seeing a lot of 3- and 4-pounders and I knew they'd definitely be a player. They're easier to catch and I didn't want to go flipping all day for largemouths when you might get five or six bites all day, although the flipping bite got better as the tournament went on."

He knew he'd need mixed stringers in order to end up on top of the final standings.

"I love to smallmouth-fish for sure, but very rarely can you win tournaments here doing only that. You can have a few in your bags, but you're not going to win a multi-day tournament on all smallmouths."

Olliverson pursued the smallmouths on points at the lower end of the lake with a small swimbait and a topwater. The approach wasn't overly effective on day 1 as he was outside the top 30, weighing a pedestrian 12-12 stringer.

After making the transition to flipping in the afternoon He lost his biggest bite of the day – and the tournament – under some unusual circumstances.

"I kind of had a target of 13 pounds for the smallmouth and if I could do a little better, that would take some of the pressure off," he said. "But the mornings weren't real good, and then between 8 and 10 o'clock I'd catch seven to 10 keepers, all smallmouth. It was like the light switch would turn on during that timeframe.

"On day 1 I got myself into a pickle and ended up staying with the smallmouth later than I wanted to. I finally got to maybe 12 pounds and then went up into the bushes and flipped up a couple of quality bites that got me to almost 13."

He lost a largemouth in the 5-pound class when he flipped over the top of a walkway on a dock. He got the fish to the walkway, but it came off there and flopped around briefly on the platform.

"It was a big male that was guarding (fry)," he said. "I tried to get on the trolling motor and get over to him as fast as I could, but when I got about three feet away he jumped back in the water.

"I wondered if that was going to haunt me – that fish was in the upper 4s and could've been a 5. It was a train wreck."

Day 2 got off to a much better start as he quickly boated a couple of 3-pound smallmouth courtesy of the topwater. That gave him additional time to flip and he ended up compiling his best sack of the derby (16-15) to jump up to 4th place.

He figured he needed 17 pounds on the final day to have a shot at the victory. The early smallmouth action was a bust and he went to the bushes with the intention of flipping, but before he got into big-stick range he made a cast with the topwater and caught a 3 1/4-pounder.

"I didn't pick up the flipping stick the rest of the day – I just kept the trolling motor on high and covered water (with the surface plug). I ended up catching 15 keepers (including a 4-pound largemouth), so it was my best numbers day.

"It was the craziest thing; the whole tournament was just odd and I felt like I was being led (into the decisions he made). The first two days I felt a lot of pressure, most of which I put on myself, but on day 3 I was so confident in every move, that it was 100 percent where I needed to go and what I needed to do."

> He replaced the rear hook on the topwater with a VMC feathered model.