Big Ones Were Shallow And Deep At Texas Fest 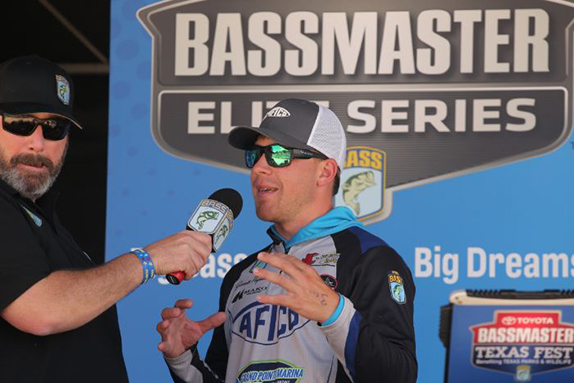 Garrett Paquette was in his element at Lake Fork, fishing offshore for beefy largemouth.

In pre-game huddles during his Hall of Fame coaching career, former Buffalo Bills head coach Marv Levy would ask players, “Where else would you rather be than right here, right now?”

It’s safe to say that if Levy had addressed Elite Series anglers during the recent Lake Fork Toyota Texas Fest tournament, the collective response would have been a resounding, “Nowhere!”

That’s how good Fork was and to think it was only going to improve in the wake of the tournament as many of the fish that were spawning or just finishing up were heading out to their deeper haunts to recover and spend the summer.

Fork presented anglers with plenty of challenges, but also plenty of opportunities. The shallow-water bite far exceeded the expectations of many, despite the weather periodically putting a damper on it. Those who opted to stay away from the bank were treated to unpredictable flurries of topwater action or big bites cranking or throwing a swimbait.

Two anglers cracked 100 pounds and the top eight finishers all had 90 pounds or more once the event wrapped up.

Here’s a rundown of how the remainder of the top five finishers figured out Fork:

As hard as he tried, Garrett Paquette just could not generate shallow-water bites on a consistent basis at Lake Fork. Instead, he did the bulk of his damage offshore later in the day and that suited him just fine.

“Each day in practice, I gave it a fair shake but I never got it going shallow,” he said. “I fished to my strengths, which is offshore.”

He said the schools weren’t terribly difficult to locate. In many instances, white bass were mixed in with largemouth as the latter was preying on the former.

“One school was easy to find,” he said. “I’d find them mostly on side imaging. I’d be seeing dots and if I felt they were bass, I stood up and threw at them. The lake is so good that a 4- to 6-pounder was in most schools, so if I could find a group there was some quality in there.”

His main focus was on secondary points in creeks, in about 10 to 12 feet of water. He tried fishing a bit deeper, but the shallower stuff proved to be more productive.

“I don’t think more than 10 guys were doing what I was doing,” he added.

He alternated between a deep-diving crankbait and a slim, paddle-tail swimbait to give the fish different looks.

“They weren’t summer areas,” he added. “They were high, hard spots with shells on them and areas around spawning pockets. There were some pre-spawners and a lot of post-spawners that would stop there for a day or two.”

> Paquette said he reeled the crankbait “as fast as I could” in an effort to mimic gizzard shad.

> He mixed in the swimbait to give the fish a different look from the swimbait. “It kept them interested,” he said.

> He also caught a couple fish that counted on a popping frog and a Molix TW 110B Super Sound walking bait. “Those kept me from spinning out in the mornings,” he said. 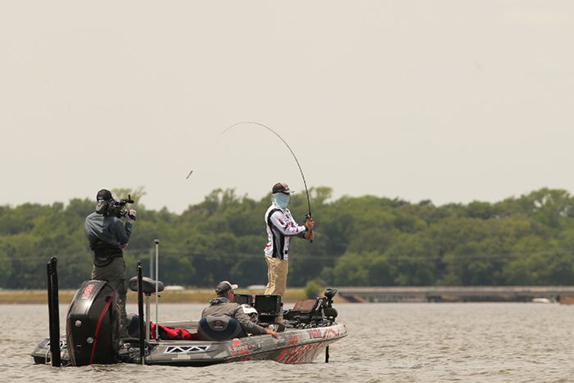 
Micah Frazier said applying some topwater principles from lakes in his native Georgia help him finish third at Fork.

Much like tournament winner Brandon Cobb, Micah Frazier said his mindset at Lake Fork was similar to that of when he fishes blueback herring lakes like Lake Lanier in his native Georgia.

One thing he didn’t do for Texas Fest was make a trip to Fork ahead it going off limits. He said he’s adopted a new approach when it comes to practice and so far he’s liking the results – a 42nd at Winyah Bay represents his worst finish.

“I’m really happy with the fact that I’ve give up pre-practice this year,” he said. “I’ve tried to show up and get on a current pattern and not worry about what I found a month ago. It works better for me that way. We get three days and what you get on is current and nothing is stale. I’ve started to realize you don’t have to know every inch of the lake. You just have to find a few good places or a good pattern and you can have a great tournament with very little knowledge.”

He said that description applied perfectly to Texas Fest. He said he talked briefly with fellow Elite Series angler Steston Blaylock, who has guided at Fork, about how the bass typically behave in the spring, but beyond that Frazier was shooting blind.

“I felt like the shad spawn would be a player,” he said.

And it was. Frazier devoted virtually his whole tournament to one arm of the lake and zeroed in on shallow, clay points with stained water on them.

“It was a similar vibe to back home because shad spawn fish get on those (points),” he said.

He caught a few keepers on a square-bill crankbait and a jerkbait, but it was only after the topwater bite, his dominant pattern, started to fade. 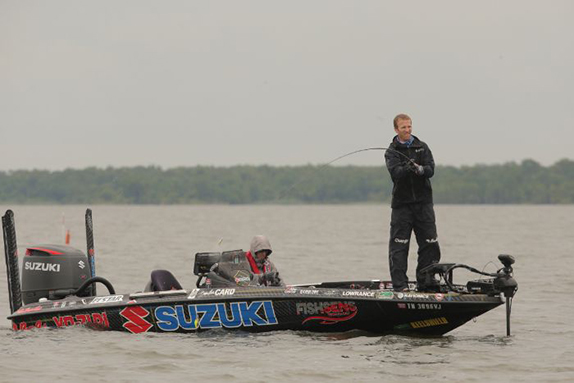 
Brandon Card did most of his damage offshore with a crankbait.

Like Paquette, Card stuck with an offshore program at Fork and came away with his second top-5 finish in the BASSFest/Texas Fest event (he was runner-up at Lake Texoma in 2016).

When the 2019 Elite Series schedule was released, Card’s immediate thought about Texas Fest at Lake Fork was that he’d be all in on the offshore bite. His first impression during practice ran contradictory to that, but it eventually came back around to his initial instincts.

“After day 1 of practice, I’d idled for four to five hours and saw very little,” he said. “Then I went shallow to see what was there and had an amazing day up shallow. Day 2 of practice was another amazing day shallow. I could catch 20-plus pounds easily.”

On the final day, he figured he needed to recommit offshore and he started to see more fish the more he looked.

“I found three schools and even more during the tournament,” he added.

He went into the tournament with a combo pattern mindset, knowing conditions would dictate which direction to go.

“I’m pretty surprised at how many fish were still shallow,” he said. “It was kind of a shocker and it made the offshore bite tougher, which might’ve given myself and the few guys who were out there more free reign.”

He spent just a couple hours offshore on day 1 and hauled in more than 25 1/2 pounds.

“It was the strangest day 1 because I thought for sure I could catch low to mid 20s within hours,” he said. “We had that bad thunderstorm and that shut down the shad spawn and backed off some spawners.

“I started on my best offshore spots and they didn’t fire. I went shallow and at 12:30, I had 11 pounds. I said, ‘I need to get back offshore.’ I almost killed the whole day up shallow.”

Rain and clouds on day 2 made it tougher to duplicate that bite, but he still managed 21-04.

Day 3 was his best day with the crankbait as he roped 26-07, but on the final day he resorted to a jig to catch a couple of fish that wound up on his scorecard.

“For whatever reason, the fish were still grouped up, but they weren’t acting weird,” he said. “I idled over them and they were close to bottom, but they wouldn’t fire on a crankbait.”

He said the areas that produced for him resembled cranking areas on lakes in Tennessee, where he now resides.

“On the offshore places, they are areas similar to how they set up on the TVA chain,” he said. “It was a pretty clean bottom, but instead of river ledges, it’s more like Douglas (Lake) with long, tapering points and humps. The drop-offs helped, too.”

He said the depths varied, but most of his deeper fish came out of 15 to 23 feet.

“The key was finding bait and white bass,” he noted

> He relied on the wacky rig throughout practice and during the tournament, he threw it areas he felt bass were bedding, but the clarity didn’t allow him to see them. 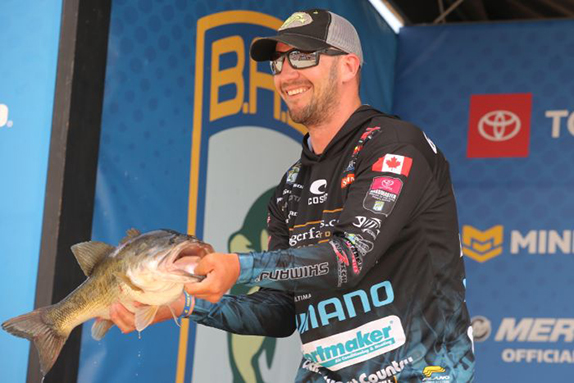 
Jeff Gustafson caught the biggest largemouth stringer of his life on day 4 at Lake Fork.

Even with several years of experience on the FLW Tour under his belt, Jeff Gustafson is still learning some of the ropes when it comes to largemouth fishing in different regions of the U.S. Lake Fork was quite the classroom for him as he departed Texas having caught the biggest limit of largemouth of his life (27-07 on day 4).

“Practice wasn’t awesome, but I got a taste that there was a bit of a shallow thing going on,” he said. “The deeper thing was happening. I think, in two weeks, the weights would’ve been bigger. They’re just starting to get out there.”

“I missed the boat in practice on how good the shallow bite was in the morning. The biggest thing over the last few days was taking advantage of that.”

He weighed in two fish each day caught off shallow points in the morning before moving offshore to fish with a scrounger head and a fluke-style bait.

“It was a fun first hour the last three days,” he said. “I caught a bunch of fish and that set the tone and took some pressure off. Fishing offshore can be stressful because you’re not catching a lot and you’re waiting for the flurries.”

While the shallow bite was strong during practice, a pre-tournament storm brought the water level up and put a lot of stain in many of the areas that were loaded with fish. That prompted Gustafson to look elsewhere early on day 1.

“In any of these, I do better fishing off the bank,” he said. “I’m just stronger doing that.”

When he got offshore, Gustafson said barren, clean points with 8 to 12 feet of water on them seemed to hold more fish than the ones strewn with timber.

“They were pleasant to fish, too, because you’re constantly getting hung up otherwise,” he said.

> Gustafson would wait for the fish to show themselves on the surface before firing off a cast. He worked it back rigorously, popping it out of the water on the retrieve. “The more commotion the better,” he said.

> He initially tried a walking topwater bait with treble hooks, but after losing a big one, he opted for the single-hook presentation. “It’s a really good bait for hook-up ratios,” he said.