Soukup The New Leader With 1 Day Left At Grand 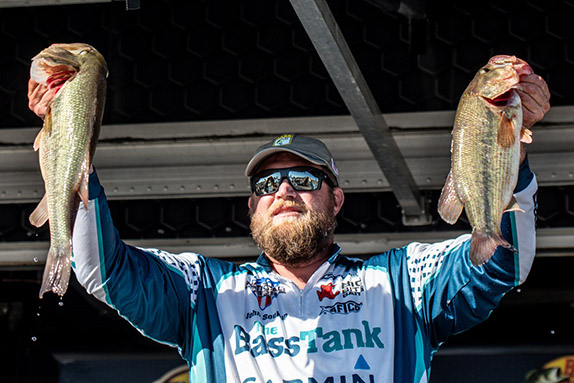 John Soukup will take a 1-12 lead into the final day of the Grand Lake Bassmaster Central Open.

Astute observation and timely adjustments proved essential for Oklahoma pro John Soukup, who took over the lead on day 2 of the Grand Lake Bassmaster Central Open with a two-day total of 34-11.

Starting his day near takeoff, Soukup ran as far as 25 miles and fared best with a mobile game plan. Noting that he fished a variety of habitat in 1 to 50 feet of water, Soukup said his electronics were essential.

“I had my Garmin LiveScope on all day and the key to where I was catching fish was 100-percent bait-oriented,” Soukup said. “If you can’t see the bait, you should probably get out of there.

“It was just an environmental study. You’d look down there and it’s full of bait, but they weren’t flickering. That’s the key – if the bait is flickering, that tells you to fish something high in the water column. If they’re not, that tells you to slow down and fish deeper.”

Soukup anchored his bag with a 5-05 that bit around noon. His most aggressive bite, by far, the fish started his only flurry of the day.

“That 5-pounder nearly ripped the rod out of my hand,” Soukup said. “It literally came out of my hand; I had to grab it and that was the hookset – just hold on!

“That was around noon and I only had two fish, but I put that one in the boat, caught another two really quickly and continued to fish around that area because I caught two good ones there yesterday and two today.”

Soukup said the scattered nature of fall denied him any more consistency. He fished bluffs, flat banks and docks and caught bass on a buzzbait, a Zara Spook, a squarebill crankbait and a jig.

“One thing would be on fire for an hour or two and then another one would be on fire,” he said. “The last 15 minutes of the day, I just fished off my gut and caught three fish doing three different things.

“It’s just typical fall stuff. You have (several) rods on your deck, you see a place that looks good and it’s right, but you try to repeat it on 20 different places and it’s not right.”

Capitalizing on a particular pattern he established on day 1, LeBrun said he had to work harder Friday. He’s fishing multiple spots and working a reaction bait with what he described as an atypical presentation.

“I had to cover a lot more water and I never had a big one,” LeBrun said. “I just had some good ones. The ones I had weren’t that aggressive and I think that was because of the lack of wind.”

On day 1, Kimura fished in the last of 18 flights. On Friday, he was the first to weigh in, so his day was significantly shorter. Also, he needed more of the wind that delivered a huge day-1 afternoon.

“I still caught a couple the first thing in the morning when there was no wind at all, but then it just completely shut down,” Kimura said. “I knew it was going to happen, so I just tried to catch my limit the rest of the day.”

Jacob Walker of Alabaster, Ala., is in the lead for Phoenix Boats Big Bass honors with his 6-09.

Cody Huff of Ava., Mo., leads the Central Opens standings with 568 points. Jay Przekurat of Stevens Point, Wis., is in 2nd with 558, followed by Jacob Powroznik of North Prince George, Va., with 546, Joseph Webster of Winfield, Ala., with 544 and John Garrett of Union City, Tenn., with 543.

Powroznik won the $10,000 Opens Angler of the Year award with 1,547 points. Committing to all three divisions, he notched three Top-10 finishes, including a win on Smith Lake, an 8th at the season opener on Florida’s Harris Chain and 10th on New York’s Oneida Lake.

He attributed his success to a disciplined game plan.

“Catch five a day, that was my plan throughout the whole deal – to catch five a day,” Powroznik said. “A lot of guys came in with two or three (in some events) and that hurt them.

“There were a lot of nerves and emotions that I had to go through this week, but it’s been a blessing. It’s something I worked hard for. Any kind of dream you have, if you put your mind to it, dreams do come true. I guess the good Lord wanted me to be back on the Elites, so that’s where I’m headed.”

Saturday’s takeoff is scheduled for 7:15 a.m. CT at Wolf Creek Park. The final weigh in will be at the Bass Pro Shops in Broken Arrow, Okla., at 4:45 p.m.

Here are the totals for the 10 anglers who advanced to the final day: