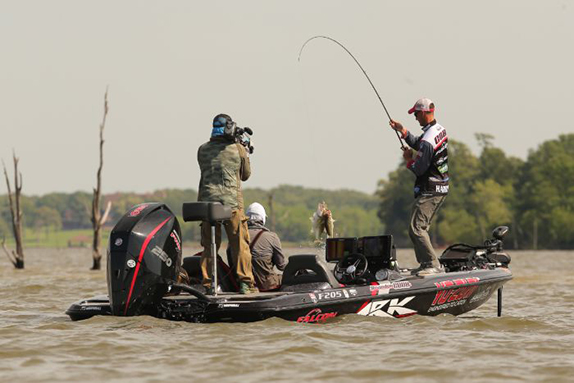 Brandon Cobb hoists two bass into the boat on Monday at Lake Fork.

Eclipse the 100-pound mark for the first time. Check.

Win a new pickup truck (thanks to the new personal-best bass). Check.

Win a second Elite Series tournament in the matter of 29 days. Check.

There was very little Brandon Cobb didn’t accomplish during Bassmaster Texas Fest at Lake Fork, which he turned into his bass fishing Shangri-La over the last five days. After walloping 37-15 on Sunday to take over the lead, the South Carolina native punctuated his week with a 29-15 haul, merely his third-biggest limit of the tournament, to finish with 114-00. It’s the highest winning weight in an Elite Series tournament since Paul Elias caught 132-08 at Lake Falcon in 2008.

It seems Cobb’s only misstep at Fork occurred off the water, well after the tournament concluded Monday and after he'd left town: He had to return to the rental house he stayed at to retrieve his pillow.

“I don’t even know what happened,” Cobb said, struggling to describe his on-the-water performance that also earned him a new Toyota Tundra for catching the big bass (11-01) of the tournament. “It’s crazy to me because I had 14 pounds one day. The other three were unbelievable.”

The average of Cobb’s weight from days 1, 3 and 4 was 33-03. Had he maintained that across all four days, he’d have broken Elias’ four-day weight record by four ounces. You won’t hear any complaining from the easy-going and humble Cobb, who said the more time he spent at Fork, the more it felt like he was in his native South Carolina, targeting bass that were chasing blueback herring to the surface.

While herring do not rank among Fork’s forage base, Cobb’s tactics this week mimicked what his arsenal would look like if he were fishing at Hartwell or Lake Murray or Clarks Hill. He relied heavily on a jerkbait over the first three days and was able to incorporate a topwater walking bait today. 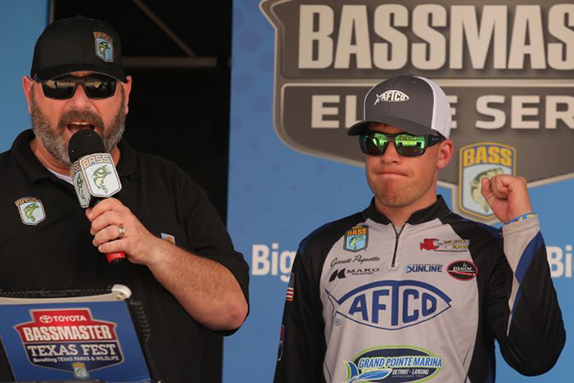 
Garrett Paquette did the majority of his damage in the afternoons at Lake Fork.

“The lake looks nothing like home, but I felt like I was 100 percent blueback herring fishing,” he said. “The difference was you didn’t catch just one at a time.”

Cobb didn’t have any 8-pounders or 11-pounders on his scoresheet today, but all five of his keepers weighed between 5-10 and 6-05. He said it wasn’t until he caught a 6-02 and a 5-10 within minutes of each other this afternoon to reach 29-00 for the day that he felt like he’d sealed the win.

“I know the potential this lake has,” he said. “I didn’t think I had it won even when I had 25 (pounds). I felt good, but I didn’t feel like I had it until I had the 5 and 6 back-to-back after having 25. What helped me fish the way I did today was feeling like someone was on my heels all day.”

Overshadowed by Cobb’s virtuoso performance was rookie Garrett Paquette, who proved he’s way more than a smallmouth specialist from up north. He tacked on 25-03 – his third bag of 25-plus pounds this week – to finish second with 101-15. Micah Frazier caught 25-15 and improved two spots to finish third with 96-12.

Brandon Card stayed offshore most of the tournament and tallied 22-04 to claim fourth with 95-10 while Jeff Gustafson cracked an all-largemouth personal-best 27-07 to rally four places to fifth with 94-05. Eight of the 10 finalists finished with 90 pounds or more.

“My buddies and I used to joke about getting to 100 pounds in a tournament,” Paquette said. “It’s pretty prestigious because you don’t get as many opportunities to do it as you do to win. But when you catch 100 pounds and get beat by 10 plus, you just shake (his) hand and congratulate him.”

Paquette, who generated nearly all of his bites off mid-depth hard spots near secondary points in creeks, capped the day with a 7-05 at 2:30. He also had two 5-plus pounders and a pair of 3-06s. He said his only regret was not developing any sort of a reliable shallow-water morning pattern to supplement his offshore areas. 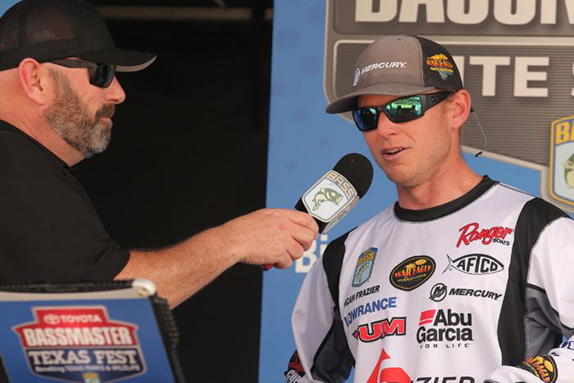 
Micah Frazier rode a topwater bait to a third-place finish this week at Fork.

“I didn’t have a morning program,” he said. “There were definitely shad-spawn and shallow fish and bed-fish to be caught and I learned as I went, but I just couldn’t figure out how to catch a meaningful fish before noon.”

By the time noon rolled around, Cobb was well on his way to the 110-pound mark. A windy start to the morning slowed down his jerkbait bite.

“They don’t like the wind here, so that’d didn’t help,” he said.

Eventually, he started to connect with some quality fish. He caught a 6-05 at 9:13 a.m. to go over the 100-pound mark. As the day progressed, he developed a 1-2 combo of a walking bait and a jerkbait in areas where he would see fish chasing bait on the surface.

“Today, I just happened to pick up a topwater and caught one and it seemed like I could bring them up with a topwater today and then continue to catch them on a jerkbait,” he said.

What was unique, though, was how shallow the fish seemed to be. Before many of his casts, he’d have to clean mud off the bill of his jerkbait since it was grinding along the bottom as he worked it.

“I think all of the fish were in less than three feet,” he said. “Some were maybe in 12 inches.”

Frazier also relied on a walking topwater bait for the better part of the tournament as he collected his second third-place finish of the season.

“I’m content with it. I had a ball,” Frazier said. “I’ve never been there before and got to catch them mostly on topwater. It was a blast.”

He caught the bulk of today’s weight off the same spot where he caught 26 pounds in a half-hour Sunday.

“I found one spot in practice that I pulled up on and got two bites quick,” he said. “I fished it every day, but never got a bite on it until (Sunday). Today, I started there, but didn’t catch anything.

“I went to a couple other places and waited about 90 minutes after the sun got up and then went back. It was game on for 30 to 45 minutes. I caught another 25 pounds. It’s crazy to start there, not get a bite, leave and come back to catch 25 in 30 minutes. Those shad-spawn fish, for whatever reason, there’s something about the sun and that time of morning that got those fish feeding.”