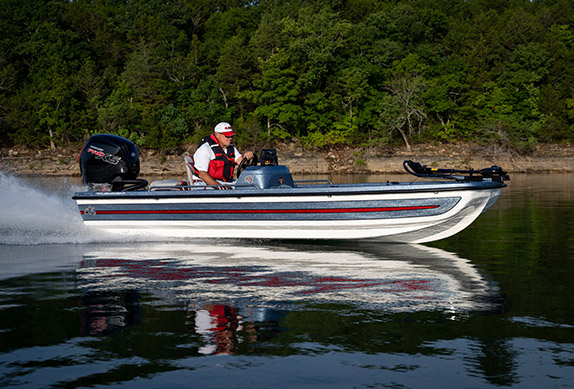 Bass Cat's newest offerings include the Deluxe Tournament model, a 1970s-style boat with modern construction and accessories. Only 50 will be built.

Rick Pierce has a story about just about everyone in the fishing industry, past and present, whether they know it or not. To see evidence of the Bass Cat president’s incredible memory, you only need to watch him at a Bassmaster Classic Expo, boat show or tournament weigh-in. Pierce receives a non-stop string of Bass Cat “family” members and invariably greets them all by name.

That near-photographic memory also stores a lifetime full of fishing-industry memories. As Bass Cat celebrates its 50th consecutive year of operation, all under the management of the founding family, Pierce is proud to introduce a slate of three new boats and multiple enhancements to the existing lineup, but most of all he wants to look back and celebrate how far the company has come. Through embargoes and recessions and changes in the industry, through today's can’t-build-them-fast-enough environment, there’s nothing that’ll faze him, but he still looks back at it all with awe.

Pierce’s father Ron, a plastics engineer, set the tone for the company early on.

“He did what it took to make it work,” the younger Pierce recalls, noting that at one point his father stayed on a cot at the factory for two full weeks, working to get a field full of boats sold. Rick estimated that in that early 1970s, there were “dozens of little companies building a pad boat and dad didn’t move fast enough.” Despite that head start, most of those other companies are gone today. By staying lean and growing at the right time, Bass Cat survived.

Bass Cat effectively had only a regional product until the next decade, when it introduced the Pantera Pro for the 1984 model year. They upgraded the hull, but the biggest difference was that they rated it for a 200-horsepower outboard.

“Nobody had a 200 at the time,” Pierce said. “That was before B.A.S.S. raised the horsepower limit, and we were selling 80 percent 200s. The same thing is going on today. Buyers who are fishing some sort of sanctioned event are buying 250s, but those who are not tied down by horsepower restrictions want 300s and 400s.

“My dad was a sharp guy,” he continued. “I respect what he knew about plastics, about business and about people, but we worked together. We didn’t play together. That’s what we had. I gave up playing baseball at 13 years old to build boats.”

Coming out of high school, he had an opportunity to go to college on a scholarship but had a change of heart before he even made it to campus. “I graduated high school on a Friday and started building boats on Monday.”

That decision dovetailed with Ron’s election as the mayor of Mountain Home, Ark., a position he held for 9 years and which forced Rick into an early leadership role. The pair didn’t always see eye-to-eye, but they shared the value of hard work.

“I can’t tell you how many 100-hour weeks I’ve worked in my life,” Rick said. It’s part of the obsession that continues to drive the company forward, and makes it a uniquely personal company in an increasingly corporatized and consolidated fishing industry.

Pierce furthermore explained that there are three main rules that guide his operation today, as they did since the company’s founding:

• Always have a reason for everything;
• Be thorough in what we do; and
• Do the right thing – even if it hurts us.

There was certainly some consternation among the “Bass Cat Family” when Correct Craft announced its acquisition of the company in 2015. Indeed, Pierce himself had sleepless nights trying to figure out whether it was the right corporate and culture fit, as well as the right business move, before saying yes. Ultimately, he told BassFan at the time, the move would “secure our heritage.” 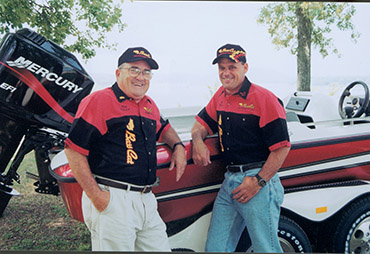 
The late Ron Pierce (left) and son Rick have guided Bass Cat through all sorts of changes to the boating industry.

Unlike some purchases and consolidation efforts, there was no overall change in management structure when Correct Craft bought Bass Cat and Yar-Craft. The factory and day-to-day management remained in Mountain Home, while Correct Craft is based in Florida.

“People want to be tied to security and to longstanding traditions,” Pierce said. “Correct Craft brings a lot to that. They’re letting us run the company with the same culture that we’ve always had – wanting to do the right thing.”

Most important, as far as Pierce is concerned, is that “Correct Craft never asked us to cut the quality. All they care about is that we build the boats we want to build.”

Correct Craft CEO Bill Yeargin said that when considering an acquisition, of course he looks to the quality of the product and the customer service, but figuring out whether the brand “fit(s) perfectly into our culture” is also an essential inquiry.

“The first thing we do is begin implementing the Correct Craft culture, which is captured by our Identify Pyramid,” Yeargin said. “I go through the pyramid during the first day in my first meeting with the employees We want people to understand our culture.”

The foundational elements of the pyramid are People, Performance and Philanthropy. The next level up is “Making Life Better,” and at the peak is “Building Boats to the Glory of God.”That corporate mission was established by company founder Walter C. Meloon in 1925 and reflects Yeargin’s recognition not only of the priority itself, but also of company heritage. Indeed, he referred to history as “a north star.”

Mix of Old and New

A cake, party or ribbon-cutting would not have fully reflected how strongly Pierce feels about his company’s heritage, so he decided to build a living monument out of fiberglass—the new 16’5” Deluxe Tournament model, a '70s-style vessel with modern construction and accessories. Only 50 will be built, and Pierce has already reserved the first one for himself.

“That will cement the heritage,” he said.

He said it’s the perfect boat for a retiree who wants to go crappie fishing, a parent who wants to give their young angler a safe first platform from which to fish, or an economical purchase for the angler who knows the value of heritage. In a further nod to the company’s history, during development the project’s code name was “Ron.”

Bass Cat boats have traditionally not been cookie-cutter models, but many of the innovations that were initially disparaged by some consumers and the competition – like a recessed trolling motor pedal – were eventually widely adopted. At the same time, there are certain things that cannot be copied, like the distinct fonts and leaping-fish logo that Bass Cat employs, a subtle nod to the heritage that Pierce treasures so greatly. Indeed, even the most modern of his boats is set apart by these throwback touches.

Bass Cat’s workforce is a likewise a mix of the long-term and the up-and-coming. The company’s tooling supervisor has worked there for 37 years, since before his 20thirthday, but Pierce is also building a team of 20- and 30-somethings to run major departments, and training them in the Bass Cat way. Pierce furthermore takes pride in the young professionals he knows who end up working in other parts of the fishing and boating businesses.

“A lot of kids want to be the ‘next Ricky Bobby,’” he joked “But there can only be so many Zack Birges and Brandon Palaniuks,” what makes me really happy is to see young people like Brad Rutherford and Tony Mehrl and Tyler Mehrl, young people who came up through the college fishing ranks and are now professionals in other parts of the industry.”

He recognizes that the boat most anglers choose to buy is not an insubstantial purchase in terms of money, or in terms of the time that’s invested, and the impact upon lives. Accordingly, the history of the individual consumer becomes part of the company’s historical tapestry.

> Along with the 16’5” Deluxe Tournament model, at July’s “Excellence in Action” meetings the company introduced the 17’7” Bobcat and the 20’7” Puma STS.

> Pierce regrets that he doesn’t have a full photo library documenting the company’s history. “Pictures weren’t as easy to get in 1975,” he said. “You could take a Polaroid, but it wouldn’t last until next year.”

> Just like Bass Cat, Mountain Home has experienced a great boom, owing to its reputation as a retirement haven with a low cost of living and significant recreational opportunities. The city itself had fewer than 4,000 residents in 1970. As of the 2010 Census, it was home to approximately three times that many.