BACK
Late Heroics From Chapman 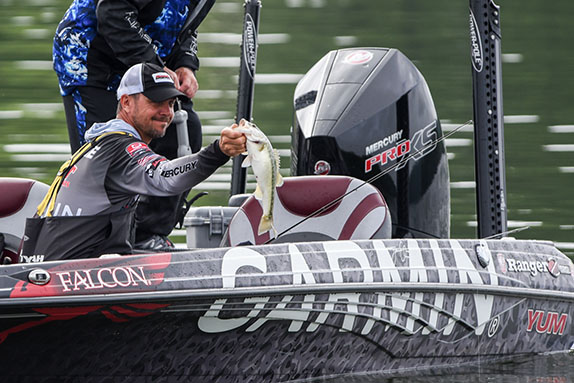 Jason Christie loaded up on offshore spotted bass for the second straight day at Smith Lake.

The angler who caught fire midway through his Elimination Round at the Smith Lake MLF Bass Pro Tour picked up right where he left off and dominated the weather-shortened Knockout Round. Meanwhile, the two guys who looked like world-beaters through the first two rounds ended up at the bottom of the pack as the field was reduced to 10 competitors for Sunday's Championship Round.

Jason Christie caught 27 scorable fish that combined to weigh 48-03 to lead the list of anglers who advanced to the final day. It's the first time the veteran from Oklahoma has made the Championship Round in five BPT outings – he was gone after the Elimination Round of the previous two events.

He moved from the shallows to an offshore area after the first period of his Elimination Round on Friday and stayed out today. He caught 16 fish in the first period and topped the leaderboard for the remainder of the round.

"I lived to fight another day," he said. "To have a chance to win tomorrow, I'm going to have to fish super-clean and come across some more (fish-holding) areas. It's all about the numbers.

"I was able to spend the last period today looking around and I found a couple more places. I think I can also catch some shallow, but I don't think I can win shallow – it's just too hit-or-miss."

Local ace Jesse Wiggins and Jacob Wheeler, who steamrolled their way through their respective Shotgun and Elimination rounds, ended up 38th and 40th after weights had been zeroed for the Knockout Round. Wiggins caught seven fish for 9-09 and Wheeler logged four for 6-10.

"I think it got so warm, so quick that (the shallow fish) eventually just left," Wiggins said. "I knew it was time for that to happen and I fished out deep some yesterday, thinking that's where they were coming, but I never caught them good and I didn't think they were out there yet. Nobody who fished shallow today caught them real well.

"My brother (Jordan, the 3rd-place finisher in last week's Bassmaster Central Open at Smith) fished the local tournament today and won it by whacking them on the points. It was a three-fish tournament and he won with 10 pounds – he caught 30 fish in 4 hours. Whoever figures out that deal tomorrow with a topwater and a swimbait could blow this thing away."

Wheeler managed just 10 bites and caught less than half of those. He said the weather threw his program a screwball and his areas got considerably more traffic than they had during his Shotgun and Elimination rounds. 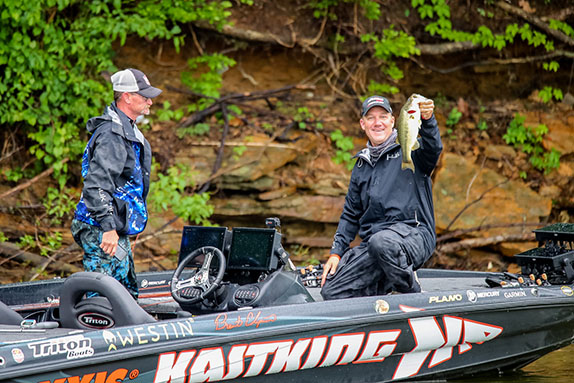 
Brent Chapman caught 19 fish on the day, including a 3 3/4-pound largemouth in the closing seconds that put him in the Championship Round.

"I was very dependent on the shad spawn," he said. "Even though I didn't have to have it going full-fledge, the storm last night and early this morning seemed to really shut down those shad from going up there and spawning. The topwater bite wasn't nearly what it was, at least for me.

"I also had no idea that so many guys from the other group were fishing the same areas that I was – they weren't getting much pressure in my group. There was a 150-boat tournament that went out of the dam and that added 10 or 15 locals to the mix and it made it difficult to move around."

The start of the round was delayed 90 minutes to 8 a.m. due to strong storms that swept through the Cullman, Ala. area. The final period was shortened from 2 1/2 hours to 1:15 due to the approach of more storm activity.

Chapman caught a 3-13 largemouth in the day's closing seconds to earn his berth. Ehrler also boated a last-minute fish, a spotted bass weighing 1-14.

"That was probably the most awesome fish catch I've ever had," Chapman said. "That's the type of thing that makes this whole format so exciting – it's like a (football team) completing a Hail Mary.

"I made my last pitch and my line started moving off to the side, and after I hooked it I had 8 seconds to get it into the boat. I swung it in from about 20 feet away and it came across the gunnel with 4 seconds left."

The late heroics by Champan and Ehrler bumped out Jeff Sprague, who was bidding for his fourth appearance in the Championship Round. Sprage handled 22 fish, a greater total than four anglers who made the top 10, but they combined to weigh only 22 pounds.

"Those fish were hard post-spawners and they hadn't put on any weight since they got done (with the reproduction process)," he said. "That hurt a little, but I had more than enough bites to get where I needed to be. It just wasn't meant to happen.

"Those guys who had catches in the last 20 or 30 seconds, that's just the way it goes. That's what's awesome about this format. I decided to go fun-fishing today and I fished the way I wanted to fish this event (shallow), but ultimately I just didn't capitalize on my opportunities."

Angler of the Year points leader Edwin Evers, who finished 16th today with 25-13 on 16 fish, failed to advance to the Championship Round for the first time. Some of his attention was diverted back home to Talala, Okla., where his house suffered severe damage from a tornado early in the week.

He'd loaded up his truck and headed for home on the evening that the tornado hit, but wife Tuesday convinced him to finish the event.

The following anglers did not make the cut and did not advance to the Championship Round.