Most Recall Jacobs As A Man Of Vision

Irwin Jacobs came into the sport of professional bass fishing in the mid 1990s and brought a lot of money with him.

What would professional bass fishing look like today if Irwin Jacobs hadn't emerged onto the scene in the mid-1990s?

That's a rhetorical question, of course – no one really knows the answer. Those who were around the sport and around the man back in those days, however, seem to agree that it would be different.

Jacobs changed things, and mostly for the better.

"Irwin came into the sport at a time when I felt it needed a shot in the arm," said legendary angler Denny Brauer, whose face once adorned a Wheaties box (an honor traditionally bestowed only upon stars in mainstream sports) because of Jacobs' dealings with companies that had no previous connection to fishing. "He had the ability to make things happen and he got the attention of a lot of people outside the industry."

Jacobs, a 2010 inductee into the Bass Fishing Hall of Fame, died alongside his wife on April 10 in a murder-suicide event at their home in Orono, Minn., a suburb of Minneapolis. Both 77-year-olds had reportedly been suffering from severe and debilitating health issues.

Jacobs, who made a fortune as a so-called "corporate raider," purchased Operation Bass from Mike Whitaker in the mid-'90s and transformed it into FLW Outdoors. The organization conducted tournaments for competitive bass anglers at all levels – grassroots through professional – and the top-level (FLW Tour) events paid out considerably more prize money than mothership B.A.S.S., around for nearly three decades at that point, was doling out at the time.

Also the owner of Genmar Holdings, the parent company of iconic bass boat manufacturer Ranger and other brands, Jacobs made no secret that the underlying premise behind his vast tournament structure was to sell boats. That mattered little to the pro anglers, who were happy to have more chances to make money – and more of it, to boot.

His injection of new funding into the sport forced B.A.S.S. to respond with increased payouts.

"B.A.S.S., for the longest time, didn't have any significant national competition," said Ken Duke, managing editor of Fishing Tackle Retailer Magazine and a noted bass fishing historian. "Their entry fees were relatively modest and their payouts were extremely modest.

"Jacobs made winning six-figure purses not just an occasional thing, but something that occurred on a regular basis. He was instrumental in the advancement with the non-endemics; some of that had been done before, but not on the scale he was able to pull it off and not with the steadiness that he was able to manage the relationship with Walmart and so forth. He was enormously influential in several ways."

His influence also extended into how the sport was televised in the aftermath of tour-level events. He hired Jerry McKinnis (who'd eventually become a co-owner of B.A.S.S) and his Arkansas-based company, JM Productions, to create a more fast-paced show along the lines of stick-and-ball sports programming.

"I really think he did one hell of a lot for our sport and in most instances he won't get credit for it like others might have," McKinnis said. "He also had lots of critics – there was a downside to dealing with Irwin, too. 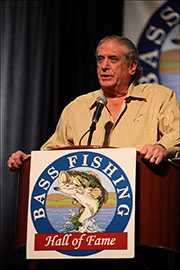 
Jacobs was inducted into the Bass Fishing Hall of Fame in 2010.

"One thing he did was put other people in position to do some good things. He inspired them and pushed them and when the final verdict was made, that person got the credit. I got a little taste of that myself – I think our group lifted TV coverage of the sport quite a little bit and that might not have happened had he not pushed for it. I'm a little bit of a perfectionist myself, but I really think he pushed me to do an even better job."

Andy Morgan, a three-time FLW Tour Angler of the Year who departed FLW after the 2018 season with 66 top-10 finishes on his ledger, says Jacobs deserves a lot of credit for building a framework under which anglers could pursue viable careers as competitors.

“He ticked off a lot of people, but in big business who doesn’t,” Morgan said. “He was trying to make things better and he did. I made a living from what he created and I appreciate it 100 percent.”

David Dudley, a three-time FLW Tour Angler of the Year, had high praise for Jacobs’ contributions to the sport, especially on the marketing side. He believes that without some of Jacobs’ controversial moves, the sport would not have advanced to where it is today.

“We all know that Ray Scott is the founder of tournament bass fishing, but without Irwin, fishing would not be where it’s at today without him shaking it up years ago,” said Dudley, who’s earned more money ($3.6 million) under the FLW shield than any other angler. “What I loved about him was his willingness in this sport to take it to another level. He wasn’t scared to try things. What’s cool is the things he thought of years ago is what it’s turning to now. He was a visionary.”

Dudley said he and Jacobs didn’t speak often, but when they did, “he made me feel like a friend.”

Mike Surman will always be the answer to the trivia question: Which angler won the first FLW Tour event? He took home a boat for his victory at Lake Okeechobee in January 1996. Since then, the purses for Tour anglers have increased and they have Jacobs to thank for that.

“The main thing is he drove the prize money not just for FLW but in B.A.S.S., too,” said Surman, who has competed in 139 Tour events since his victory. “He actually made the whole sport viable whereas before, you were fishing for your own money. Originally, it was more like gambling and now it’s grown to where you can make a living and that’s because of Irwin.”

Surman said he used to talk with Jacobs “quite a bit” and described him as a “very direct individual.”

“He was definitely a visionary,” Surman said. “We had conversations about where he thought the sport was going and guys being able to promote their own sponsors. He listened, but being like he was, he was set in his ways in how he wanted to do it. I think he was right in a lot of ways because he took the risk with his money and his relationships brought more sponsors into the sport and made it grow into what it is today.

“Initially, when Irwin came out with some ideas, they seemed far-fetched way back when. People were saying, ‘This guy’s crazy. There’s no way the sport will get to where he thinks it will be.’ Guys didn’t want what Irwin was bringing to the sport, but if you look now at MLF, it is a lot of what Irwin came up with. Guys can promote their own sponsors, but there are also league sponsors that they all promote.”