Jesse Wiggins caught 15 more fish and 16 more pounds than anyone else during the Group B Shotgun Round at Smith Lake.

About the only thing that didn't go right for Jesse Wiggins during the Group B Shotgun Round at the Smith Lake MLF Bass Pro Tour was that he failed to catch a scorable bass in the final minute to give him 50 for the round. Other than that, the Addison, Ala. resident had a phenomenal day on his home water.

Wiggins set a single-day record for the fledgling circuit with 49 legal fish (1 pound or heavier). They combined to weigh 72-04, which was over 16 pounds more than anyone else in the 40-angler group registered.

He said he didn't expect to produce such prolific numbers today.

"Before off-limits, say a month ago, I could've caught 100 pounds easily," he said. "I might've been able to do that today if I'd really tried, but I thought the fish were leaving. I didn't think it would be that good."

Eighteen competitors in Group B caught at least 20 fish, which was double the number logged by Group A on the previous day. Jacob Wheeler (61-14) was the only competitor to exceed 50 pounds on Tuesday ¬– a mark that was surpassed by the top 4 today.

The number of big fish was down, however, as only Watson and Rojas boated 4-pounders. There were four such fish caught the previous day.

The shad spawn, which is heaviest during the early morning but has been going on throughout the day, continues to be the dominant theme. Anglers who miss out on it during the first of the three 2 1/2-hour periods put themselves into a hole.

Group B will take Thursday off as Group A conducts its Elimination Round to determine the 20 anglers who'll advance to Saturday's Knockout Round.

Wiggins used a topwater to catch nine largemouths in the opening period, then hit the drains at the backs of two pockets and clobbered spotted bass with finesse baits. His biggest fish was a 3 1/2-pound spot that bit early in the second period and he had six others that were over 2 pounds.

"I think that's just the size that's left – a month ago it was twice as good and there were a lot more big ones," he said. "They're in there feeding on the shad and the blueback herring. I've got a lot more stuff like that I can go to." 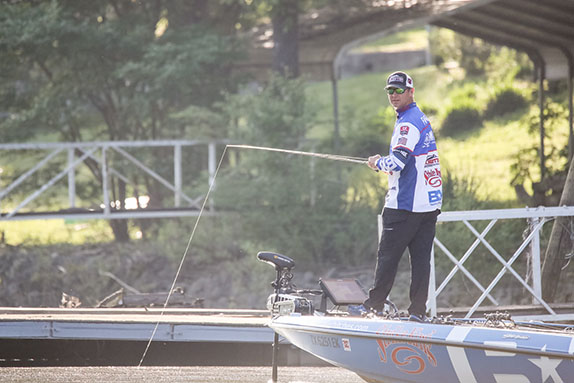 
Todd Faircloth caught quite a few fish on one pattern in the morning and a bunch more on a different pattern late in the day.

Having reverted back to practice mode at the end of the day, he went to a place he hadn't visited this week and caught a fish on almost every cast.

"I was trying to get to 50 and I caught my last one with 2 minutes left. If I'd had another minute I probably could've caught another one."

For Faircloth, the middle of the day wasn't overly productive, but he had a good morning and a strong finish.

"I was getting a lot of bites in practice and I felt pretty good going into it, but you never know," he said. "At the end of the day I started practicing again and what I was doing was working pretty good.

"I've got two different deals going; one for the morning and one for later in the day. You can kind of run a pattern on this lake and I like pattern-fishing. Getting this many bites is a lot of fun."

Fukae, who's been one of the top finesse anglers in the game for many years, fished points and the back of creeks to push his opening weight past the half-century mark. All 33 of his fish were spots and the biggest weighed 2-13.

"I had a good practice the first day, but the second day wasn't good with the water (level) going down," he said. "In the first period today they were biting and I caught 25 or 26 pounds. After that it got slower and I tried to save some fish for Friday."

Watson developed his game plan on the second practice day and was hoping to catch 12 to 15 fish before 9 o'clock. He accomplished that, and then they just kept biting.

He said he could've had considerably more weight had he not farmed several bites that were over 2 1/2 pounds.

"I had one big one hit me so hard and come at me so fast that I couldn't catch up to it," he said. "When I did finally catch up, I couldn't turn the reel handle on 20-pound line and it pulled off.

"I'm just glad to finally get into a post-spawn situation. I (stink) during the spawn."

Lucas, who was competing on his 33rd birthday, said he limited his practice to parts of the lake he'd never fished before. His previous visits to Smith had all been during the fall, winter or early spring.

"It was steady for me in the morning, but then I had a really dead period from about three-quarters of the way through the second period until about halfway through the third," he said. "Then I made a move to an area I'd kind of been saving; it was a 10- or 12-minute run, but it paid off because I caught several fish.

"I kind of guessed that this was about the way the day was going to go. It was fun."