Big Bags On Tap at Chickamauga 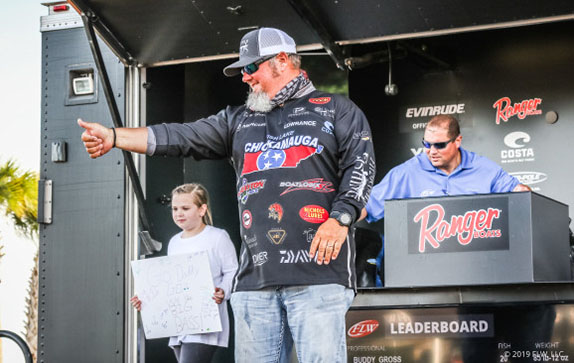 Buddy Gross, who won at Lake Toho in February, will be one of the heavy favorites on his home lake this week as the FLW Tour visits Lake Chickamauga.

It wasn’t a long drive, but it may be worlds apart.

The FLW Tour stopped in Tennessee three weeks ago to put a whooping on spawning smallmouth in Cherokee Lake. The tour is back in the Volunteer State this week and another Tennessee beat-down could be in store. However, to say the weights will be larger might be a massive understatement.

Lake Chickamauga has established itself not only as arguably the best Tennessee River lake, but also one of the best big-fish factories in the country. The Dayton Boat Dock tracks how many 10 pounders are caught each year, and more than 70 have been logged over the first four months of 2019. And that’s just the ones that have been reported.

Throw in the fact that some serious spawning activity is happening – both bass and shad – and the first wave of post-spawn fish is making its way offshore, and you have a recipe to see some serious weights this weekend.

Let’s take a look at “Chick” before getting into whether or not we could see someone crack the century mark.

Growing up on the waters of a lake like Chickamauga will not only make you a versatile angler; what with the lake’s grass, ledges and brush. It could also ruin you.

“This place is a big-fish factory,” said local and tournament favorite Buddy Gross. “It gets tons and tons and tons of pressure and it still holds up. I mean, I’ve caught three 10-pounders this year, and I’m barely home to fish.”

When a lake like this pops up on a schedule, immediately people wonder if someone can crack the elusive century mark and catch more than 100 pounds of bass over four days. Yet, while that certainly is a possibility, Gross is not sure if it will happen.

The offshore bite is often the best way to crack those truly large bags, but he says we’re still a couple weeks early from that really being a player. Though, he says it will be a factor, as someone could find one of those in-between, staging, offshore spots and do some real damage. Problem is, those areas are so minimal in number and so well known, an angler will need to have a good boat draw to get on it. Yet, even if an angler gets on one, he may have to be patient.

“A lot of those offshore spots are timing deals,” Gross said. “So a guy may fish all morning, leave and then someone else will show up 10 minutes later and wreck them. That’s going to happen to somebody in this event, guaranteed.”

That will leave sight-fishing or the tactic that Gross thinks will be the winning program: the shad spawn.

Sight-fish goes without saying, but there is definitely a shad spawn going on in sections of the lake. That’s been a tournament-winner in the past on Chickamauga, especially when you have cloudy weather forecasted, which will prolong the bite from just the early morning to the majority of the day.

Of course, finding not only the right shad-spawn spots but the ones that happen to have those 5- and 6-pounders around is going to a very tough task. Still, Gross thinks someone will stumble upon a spot like that and make a run at winning.

“It’s going to be a fun event,” Gross said. “A guy will be able to do whatever he wants from the bank to out deep. That’s going to really spread the field out.”

Miles Burghoff
“The lake is in that middle ground where a lot of fish are still spawning but a lot want to go offshore. It has the lake in a weird funk.

“I haven’t been able to find the quality yet, especially offshore. That’s what I want to do. Problem is, there’s not that much offshore stuff here. So boat draw could play a factor this week.”

Bradford Beavers
“I’m struggling. I caught one Sunday and only four Monday. I don’t know what the fish are doing. From what I can tell, the fish are in all three stages.

“I was here two years ago at the exact same time. I didn’t see fish on bed like am now. The fishing then was the best I’ve ever seen. Unfortunately, the places I caught them last time, they’re not there. So I need to try and get away from history.”

“I’ve definitely been looking for the shad spawn because I know it’s happening. I just haven’t found it yet.”

Jason Abram
“Practice has been decent. I've been getting 30-40 bites a day. A guy can pretty much fish to his strength. I’m more of a shallow-water guy, so I’ve been beating the bank, but they’re starting to really school up out deep.

“I think Chickamauga is going to fish bigger than it normally does. Plus, I think the weather will help the shallow guys.

“I’ve tried chasing that shad spawn, too. Somebody is going to get healthy real quick in the mornings on that. It’s just very hard to find.

“Personally, I’m hoping Watts Barr plays, because that’s where I’m going. I want to get away from a lot of the pressure. Plus, two years ago I did really well here, too, and finished just outside the top 10 in a Costa.”

Tyler Stewart
“Practice has probably been as good as everybody else’s. There’s tons of fish in this lake. Deep, shallow, everywhere, and they’re all biting. Problem is I haven’t figured out how to get those big bites consistently.

“I’ve committed 99 percent of my time to idling. I went shallow a couple times and got bit every time, but I saw a couple groups out the first day of practice. When I saw those, I made the commitment. I really feel it will be won offshore. The schools are huge, but they’re also on obvious stuff, so it’s going to be a boat race. There will probably be some controversy.”

Here are a handful of anglers who might fare well considering the way that Chickamauga is set up this week.

> Buddy Gross – The local has “Chickamauga” on his boat wrap. Enough said.

> Braxton Setzer – He’s shown he can fish both shallow and deep this year as he's put together his best season on the Tour.

> John Cox – He’s won a Bassmaster Open on Chickamauga, and with how many fish guys are seeing on beds, the best sight-fisherman on the Tour has a real shot at the win.

> Bryan Thrift – In a tournament where versatility will be an asset, he’s the best. Plus, he has quite a successful history on Chickamauga, with multiple top-10s.

> Alex Davis – He guides just down the road at Guntersville and should have a great idea about which stage the fish are predominantly in. Oh, and he’s won at Chickamauga before.

The FLW Live on-the-water program will air on from 8 a.m. to 2 p.m. on days 3 and 4. The broadcasts will be live-streamed on FLWFishing.com, the FLW YouTube channel and the FLW Facebook page.