Big Numbers Set To Be Posted At Smith

Longtime Smith Lake ace Jesse Wiggins will be an angler to watch this week.

The Major League Fishing Bass Pro Tour is only four events into its existence, so it doesn't have much history as far as weight records and whatnot. Any standards that do exist are in serious jeopardy this week when the circuit visits Alabama's Lewis Smith Lake.

Smith is absolutely teeming with spotted bass in the 1 3/4- to 2 1/4-pound range. Those fish don't do an angler a lot of good under the biggest-five-per-day traditional tournament format, but they'll all register in the MLF program of counting all scorable (1 pound and over) bass. Some anglers will likely cycle through several dozen such fish per day and a 50-fish, 100-pound day is a real possibility.

Lots of different tactics will be in play – from topwaters to shaky-heads and everything in between. The spawn appears to be mostly complete for both the spots and the lake's substantial population of largemouths, with some of both species feeding up in the wake of the annual reproduction ritual and perhaps some bigger largemouths still waiting to come to the extreme shallows.

Before delving deeper into the bite, here's some info on the fishery itself.

Here's a look at how the lake sets up, courtesy of Navionics:


Now is the Time

Former tour pro Greg Pugh, who won a BFL earlier this month at Smith and finished 13th in last week's Bassmaster Central Open, said the number of scorable bass caught by BPT anglers will be eye-popping.

"These guys will really show what the lake is capable of as far as numbers," he said. "The size might be iffy, but there will be a lot of big spots coming off of beds and wanting to bite. Guys will be weighing in 3-pound-plus spots and it'll be fun to watch and see how they're doing it.

"It's so wide open and they're biting so good that guys will be able to do just about whatever they want. I know places where I can go catch 25 or 30 15-inchers as fast as I want to catch them. Guys who locate places like that will do well."

Boat docks will see a lot of traffic as they're the favored hangout of post-spawn spots that are feeding up in preparation for their trek back to deeper water. Main-lake and secondary points will also be big players. 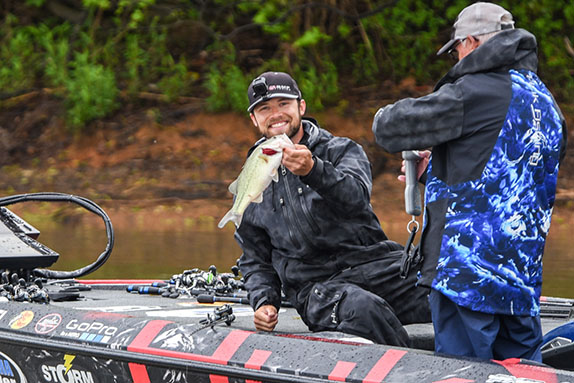 
Brandon Palaniuk said that staying on top of fish that will be on the move will be a big key at Smith Lake.

The lake has an overabundance of baitfish – blueback herring, threadfin shad and bluegills. All are either presently spawning or preparing to, and schooling activity featuring dozens of bass gorging themselves on them is frequent and widespread.

"They won't be just little places like the size of a truck or boat, but half and acre to an acre," Pugh said. "It's real close to blowing wide open right now.

"I found a place (during practice for the Open) where 5- and 6-pound spots were just blowing crappie out of the water. I took the hooks off my topwater and had one just engulf that that thing – they'd get it so good that you could get them to jump a few times even without hooks.

"I never went there in the tournament because it wasn't solid – it'd just happen every once in a while. If I'd have gotten a 17-or 18-pound limit I'd have gone and tried it to see if I could catch two or three and really get big, but I never got to that point."

Jeff Sprague
"I really like what I saw. The lake's been pounded pretty good recently, but the fish are starting to move around and transition and stuff and they're starting to feed again.

"This is going to be a quantity, not quality, event because at these spotted bass fisheries most of the fish are around the same size. You don't have the 10-pounders that can give you separation like you do at some other events.

"Some guys will live or die with one or two techniques and some will do one thing for a while and transition to something else. I feel good about what I'm doing and I'm looking forward to it."

Brandon Palaniuk
"I still have a lot to learn about spotted bass. I think there's going to be a lot of fish caught, but the biggest thing is you're going to have to catch them consistently throughout a day and also throughout the whole event. I feel like they're going to move around a lot and with this format, having a day off, it gives them extra time to move on you.

"I'm not super-confident – I kind of feel like I'll be hovering around the cut line and maybe just slide in there. But with the way things develop at this time of year, you could find a group of quality fish and make up a lot of ground in a hurry."

Chris Lane
"It hasn't been real hot for me – it's typical post-spawn at Smith Lake. I think they've already had a mega-spawn like we did on Guntersville, which is only 45 minutes away, and it's going to be a full-blown post-spawn event.

"There's a major algae bloom right now – probably the biggest one I've ever seen. It goes on for miles and the water is pea green and you can see down half a foot, and the lake's usually crystal-clear. It generally doesn't hurt the fishing too bad, but I've never seen one this thick.

"I just keep telling myself that it's Smith Lake and it's got tons of fish. If I can catch 20 tomorrow, I'll consider that a great day. If I catch 10, that'll be right in line with how practice went. Every day is different and I'll be running new stuff again tomorrow, trying to find that ticket."

John Murray
"There's plenty of numbers here, but with the water having dropped about 4 feet over the last week, the big ones don't seem to be up. I'm sure someone will find them, but I haven't.

"You're going to have to catch them all day in this deal – one bad period and you could be done for the whole tournament. There will be a lot of different strategies as far as running and stuff like that.

"I can get bites, but I'm not bursting with confidence. I feel like I've got a few things going on and maybe between all three I can keep getting bit all day."

Dean Rojas
"Smith Lake is going to fish very well this week. There's going to be a lot of fish catches and I don't know where the ScoreTracker is going to end up, but you're not going to be able to stop catching them. This one's going to be all about numbers and it'll be interesting to see how it plays out.

"There's some weather coming in and I think that'll probably help. Everybody's just going to have to hold on tight and let 'er rip."

> Jesse Wiggins – If he's not fishing a tournament somewhere else and Smith isn't under off-limits restrictions, he's on the water. He knows dozens of places where he can catch a bunch of keeper-size fish.

> The Lee Brothers – Jordan and Matt perhaps don't know the lake to Wiggins' level, but the Cullman natives are more than highly familiar with it. They likely won't have difficulty locating fish that will bite.

> Aaron Martens – His superior dropshotting skills could easily become a route to a high finish.

> Gerald Swindle – He's very good at catching fish around docks and there are a lot of them to be caught.

Competition will get under way each day at 6:30 a.m. CST for the first of three 2 1/2-hour periods with a 15-minute break in between. Anglers will launch from Depot Park (corner of Arnold Street and 2nd Avenue. The post-game show will begin at approximately 4 p.m. at Depot Park.