Spawn Interruptions Are Prime For Froggin' 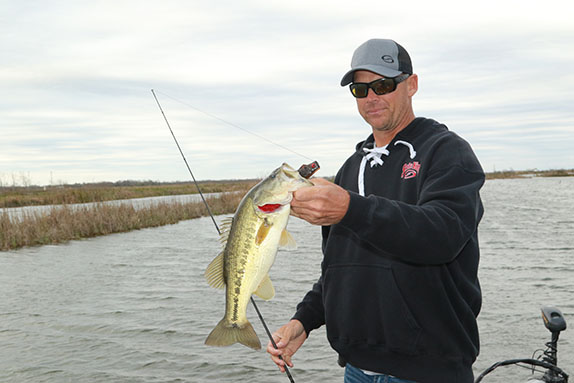 Todd Castledine likes a frog imitator for the spawn because he can keep the bait in place for taunting presentations.

Todd Castledine is well-known for his hollow-body topwater skills, but it's not only a fair-weather program. He catches plenty of fish on pretty days, of course, but the Texas pro has no reservations about employing his signature tactic when nasty days postpone or interrupt spawning cycles.

Cold, windy – no problem; even on post-frontal days, he knows that this presentation appeals to fish that have left the beds, but are holding close. And when conditions stabilize and fish start easing back to the spawning zone, the topwater game is one of his favorite ways of dialing in the active areas.

Now, for clarity and broad-scale inclusion, Castledine’s weapon of choice is a Strike King Popping Perch – a hybrid version of the familiar topwater frog concept. This bait that he designed sports a flat tail, which not only presents a profile similar to the nest-raiding bluegill that bass despise, but also provides extra drag to hold the bait in place for targeted twitching.

All this to say that, the strategy to which Castledine adheres can be executed with your choice of soft topwater bait. The key is understanding why it can be such an effective spring option and then maximizing its appeal.

“I consider this less of a pre-spawn bait and more of an around-the-bed type bait,” Castledine said. “In my opinion, they’ll only bite it within a couple of days of getting on a bed.

“When you start throwing this bait around spawning flats and you really start catching them, it’s because they get up there and become really territorial. Let them get up there and start making a bed and that’s when it becomes the deal. It has to be warm enough for them to be aggressive, but if they’re not territorial, I don’t think they’ll bite it.”

As Castledine explained, the seasonal slice he’s looking for is the transition from heavy pre-spawn feeding to painting the nursery. They’re not hitting baits out of hunger, so they’ll miss a lot, but they’ll probably give you more shots than when they are chowing because they’re attacking out of home defense.

Think “angry soccer mom.” Took your parking spot? Let it go. Cut you off in traffic? Not worth it.

These early spawners have zero patience and even less mercy. But, as Castledine notes, that’s exactly why that hovering, twitching figure above red-lines their aggression.

“When they’re on it, I think it’ one of the best baits there is,” he said.

Further refining his concept, Castledine describes what he considers the slam-dunk time for his topwater attack:

“They’ve moved up to start spawning and then the weather backed them off,” he said. “They’re still there, but they’re not on the beds. I think besides a Strike King Ocho (stick bait), the topwater bait is the only way to catch those fish.” 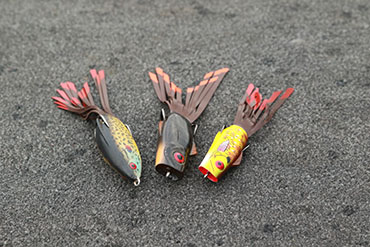 
To cover his bases, Castledine keeps a Strike King Pad Perch, a Popping Perch and a Pipsqueak handy.

During a recent visit to Grosse Savanne Lodge in southwestern Louisiana, a cold front dropped the water temperature a few degrees and put the brakes on a spawning wave. In fairly close proximity, others in our group were whacking them on swim jigs, while Castledine enticed 20 into biting his Popping Perch.

“I think those swim jig fish were pre-spawners, but those bed fish, that (topwater bait) was the best thing for those fish that got pushed back in more or less open water,” he said. “If there’s bushes around, you can flip them. But when there’s not, this is one of the top baits to throw.”

Along with timing, Castledine wants his fish spawning in particular locations if he’s going to use his topwater technique. He wants them in modest depths – no more than a couple of feet – otherwise, the Popping Perch’s intrusive profile doesn’t impart sufficient anxiety to draw an attack.

“It has to be clear enough and the fish have to be shallow enough that they want to be protective,” Castledine said. “Sometimes, at Toledo Bend, they’ll spawn in 4-5 feet and you’ll never catch them on this bait. It has to come over their head close enough that they feel it’s a threat and then they’ll eat it.”

Also, edges are key; particularly hard lines such as reeds. Pad stems, while looser in grouping, can also work; just none of that thick stuff like flooded bushes that leaves little room for placing and working the bait.

“One thing you noticed was that none of the fish (at Grosse Savanne) ate it right up on the reeds; they ate it 4-6 feet out,” Castledine said. “It’s hard to put another moving bait in that same spot and make it look right. You’re going to almost be landing on there, whereas that Popping Perch lands over top of them. It doesn’t spook them as much and you’re able to work it through there fairly slowly.”

Basically, Castledine’s preferred bait allows him to target highly territorial fish in specific scenarios with a space-conscious presentation that can move when it needs to move, but pause and hover to enhance the ruse.

Castledine said the Popping Perch gets most of the reps because it’s big enough to yield solid castability, yet sufficiently compact for reaching into particular spots. He may downsize to the Strike King Pipsqueak if the bite becomes tough, or switch to the narrow-nosed Pad Perch for working across vegetation. However, the Popping Perch’s versatility typically gives him all the tools he needs. 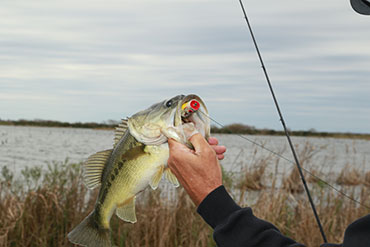 
Castledine notes that frog bites during the spawn are typically less aggressive than when he's fishing over cover.

“I can walk the Popping Perch (like a standard narrow topwater bait), but if I want to add a pop in there to trigger a fish, I can do everything with that bait,” he said.

Whatever he throws, Castledine knows that success requires persistence – especially this time of year.

“You’re gonna have them miss the bait a lot this time of year because they’re not really trying to eat it, like they do other times of the year,” he said. “I get a lot of fish swirling on the bait and then they come back and eat it.

“Sometimes, they’ll eat that smaller one a little bit easier. So, if I miss three or four in a row, that’s when I need something changed. And with the Pad Perch, I’ll throw that anytime there’s something floating on the water – scum, pine needles, pollen – because it comes over that stuff without collecting it.”

Fishing his topwater baits on a 7'3" Falcon Cara swimbait rod with a 7.2:1 Lew’s 300 Super Duty reel with 60-pound Sunline Xplasma braid, Castledine explains that the disrupted spawners he’s seeking simply rise to grab a topwater bait and then sink back down. That means a subtle slurp replaces the violent streaking behavior common in other scenarios.

“Most times of the year, the fish explode on it and take off; but these fish don’t do that because they’re around their bed,” he said. “They just come up and eat it; they’re not really going to cover to hide, so I almost never set the hook off of feel. The majority of the time, it’s sight – I watch my bait through my Costa sunglasses to see if it goes under.

“You have to get really good at watching and seeing if they've got it. If you do it enough, you can sometimes hear it. There are some that barely make a sound, but if I hear a deep-sounding suction, that usually means they’re sucking in the bait – that’s when I set the hook.”