BACK
Vegetation Changes Everything 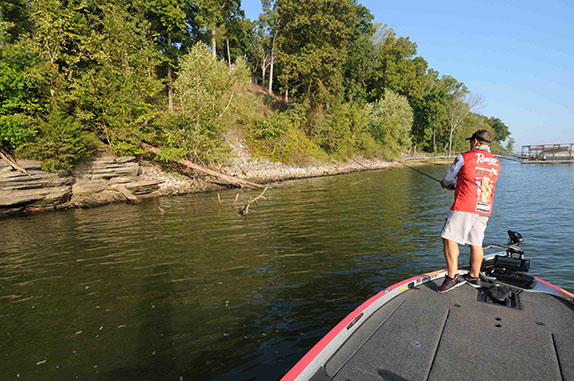 Greg Bohannan favors fishing reservoirs over natural lakes because he knows how bass relate to the primary cover of impoundments.

FLW Tour pro Greg Bohannan started fishing competitively on rocky Ozark highland reservoirs, but after turning pro he had to learn how to fish different bodies of water.
The Arkansas veteran admits he had to make a big adjustment when he started fishing natural lakes.

“My first year on the Tour, I had never seen a blade of grass before and so my biggest challenge was learning the different types of vegetation and how the fish related to the vegetation,” Bohannan said. “I had been so used to fishing channel-swing banks and rocks and how fish relate to transition in the rocks, but it seemed like a natural lake has some type of vegetation in it and fish tended to congregate more. It was more about finding the right area as opposed to running a pattern.”

The major tournament circuits frequently present the touring pros with the challenge of making adjustments from fishing natural lakes to manmade reservoirs, and vice versa, throughout the year. Here is a look at some of the differences in the two water-body types the pros have to adjust to on the tournament trail.

“Natural lakes are generally void of major structural depth changes,” Bassmaster Elite Series pro Mark Menendez said. “They tend to be pretty boring and bowl-shaped in most cases. So if you find something that falls 1 to 3 feet in depth, you have found truly the Grand Canyon in comparison to a reservoir.”

Menendez notes that manmade reservoirs such as his home waters of Kentucky Lake feature diverse bottom contours with river- and creek-channel bends, road beds, humps and ledges. Major League Fishing (MLF) pro Jonathon VanDam notices reservoirs have more creek channels, bluffs and shell beds for structure, whereas the Northern natural lakes he grew up fishing feature more rock piles that attract bass. He believes the rock piles on natural lakes are more permanent bottom contour than the reservoir structure of shell beds or humps that can eventually be washed away by current.

When Bohannan started fishing natural lakes, he discovered bass related more to drains or depressions than the bottom structure he previously fished on the Ozark reservoirs.

“I had never heard of something called a drain,” he said. “When you get on a natural lake your focus is finding the hard bottoms, but I had never thought about that in the Ozarks (where the reservoirs are mostly rock bottoms).”

The bowl-shaped lakes in Florida were also a different look for Bohannan.

“When I went to Toho, it was like fishing a big farm pond with grass in it," he said.

Aquatic vegetation and rocks are the main cover for bass on natural lakes.

“It seems likes your glacial lakes tend to have more vegetation in them than a reservoir,” Menendez said. “So the weed edges become the structural element in a natural lake.” 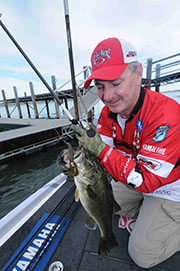 
Mark Menendez catches reservoir bass relating to a variety of bottom contours throughout the year.

The main cover Menendez finds on manmade impoundments are standing timber, docks, rocky banks and stumps. The Kentucky pro suggests reservoirs also have aquatic vegetation, but the amount of plant growth depends on water clarity and the amount of rain the reservoir receives in the spring. He notices weed growth patterns are more consistent every year on natural lakes.

Natural lakes contain a mixture of vegetation with reeds, lily pads and coontail growing throughout, according to VanDam. The Michigan pro notices reservoirs with vegetation usually are dominated by one type of grass. such as hydrilla or milfoil.

VanDam suggests the size of a natural lake determines how much current is evident. He claims Lake St. Clair and the Great Lakes have a “tremendous amount of natural current.” Wind generates most of the current found in natural lakes, but VanDam also finds current created by water flowing into the lake from creeks and rivers.

Reservoirs feature current either created by wind or power generation. Menendez suggests wind current becomes more noticeable in the creek arms and tributaries of an impoundment, whereas current created by power generation is strongest on the lower main channel of the reservoir.

“All the natural lakes I have fished over the years are predominantly quite a bit clearer than what reservoirs are,” VanDam said. He claims the current from power generation and water-level changes on reservoirs make water more turbid on manmade impoundments. 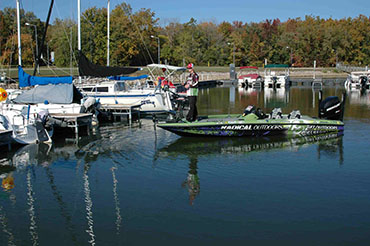 Bohannan also notices more stable water levels on the clear natural lakes, whereas water levels can fluctuate drastically to stain the water on reservoirs. He recalls fishing a tournament on Beaver Lake when the lake level fluctuated 11 feet in four days.

Reservoirs are newer and have a lot of mud flowing through the impoundments that colors the water, Menendez said. He notes the older natural lakes tend to be clearer and provide better light penetration through the water. resulting in better weed growth.

Menendez favors fishing natural lakes in late summer and fall because the grass is full-grown and he can find the irregularities in the weeds that attract bass. His favorite times to fish reservoirs are during the pre-spawn, when he knows bass are moving up on points, and the dead of summer, when he can pinpoint bass on the main lake.

March and April are the prime months VanDam picks for fishing reservoirs; he chooses May and June as his prime fishing months for natural lakes. VanDam also suggests summertime fishing can be good on either.

Reservoirs produce best for Bohannan during the pre-spawn in the spring. He favors fishing Okeechobee or Toho during the spawn because it is easier to catch bass sight-fishing on those natural lakes.

“The thing that makes a natural lake easier to fish is the water clarity,” Menendez said. “It immediately makes me fish either a finesse technique or a speed technique, such as burning a spinnerbait, jerking a jerkbait or swimming a big swimbait. If I don’t catch them that way, then I have to go to a diminutive bait and fish a dropshot or shaky-head or something else small. You may have to cover a lot of grass to find them, but when you find that irregular feature in the grass, you usually find what you are looking for.”

Natural lakes are easiest for VanDam to fish because he grew up fishing Northern lakes. He also prefers natural lakes because they usually have stable water conditions and the only main change throughout the year is the weed growth.

“Natural lakes are a little bit more predictable in what’s going to be where,” VanDam said. “Whereas reservoirs are definitely a little bit harder to fish because generally nothing is the same no matter when you are there.”

Since he grew up fishing the Ozark lakes, Bohannan discloses reservoirs are easier for him to fish because he knows how reservoir bass relate to rocks and docks.