BACK
Redcrest Is New Focus 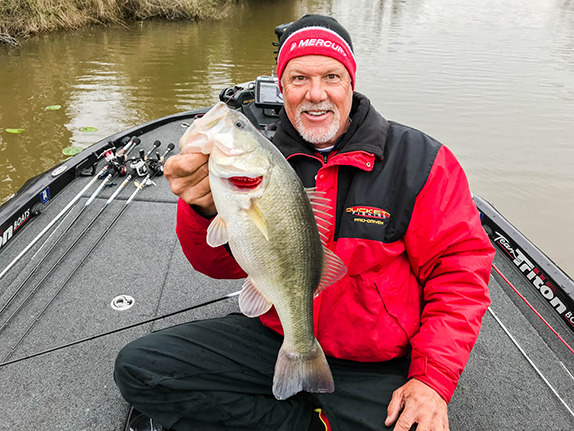 MLF co-founder Boyd Duckett said he fully expects the Redcrest Championship to become the dominant event in the sport and that's where the organization's focus lies.

For a short period last week, it appeared that Major League Fishing anglers would be prohibited from working the 2020 Bassmaster Classic Expo in the booths of their individual sponsors. In the wake of negative feedback from a few of the largest companies in the industry and concern expressed by some anglers about fulfilling their own sponsorship obligations to those firms, MLF has softened that stance for next year.

However, co-founder Boyd Duckett made it clear in a phone conversation with BassFan that the organization's focus going forward will be on making its own Redcrest Championship into the biggest event in the sport.

"We're trying to build Redcrest to be bigger and better than the Bassmaster Classic," Duckett said. "Now that's a tall statement, but so was everything else we've said to this point, and we've done it. The only way we can do this is with a complete focus on our own business model. Our strongest assets are our players and there's no value to MLF for them to be at the Bassmaster Classic. (That stance) isn't anti-B.A.S.S.; that's a bad perception that's out there. It's positive toward MLF.

"I knew this would create a mess at first, but the world has got to realize that all our guys are on one team and our team's job is to grow MLF, not B.A.S.S. or FLW or anybody else. With the sponsors, it's really a risk-tolerance issue, and obviously we need them and they need us. If we have to slow-walk them through this to keep their comfort level up, we'll do so. We're here to help them and if they need us at the Classic next year, we'll be at the Classic."

The issue arose from an email sent by MLF President and CEO Jim Wilburn to sponsors announcing that the inaugural Redcrest Expo will take place in 2020. The organization will conduct its first championship tournament this summer in La Crosse, Wis., featuring the top 30 anglers from the final Bass Pro Tour standings, but it will not include sponsor activation. The BPT itself wasn't announced until last fall – too late to ask sponsors to commit to a presence at an additional major event in 2019.

The email, dated April 15, urges sponsors to begin preparations for Redcrest 2020, emphasizing that it "isn't going to be a boat and tackle show, but a celebration of the outdoor lifestyle, including, but not limited to, fishing, hunting, shooting and camping. We intend on having notable guests, interactive elements and fun for the whole family. Within the Redcrest Expo we will also be featuring MLF NOW, with live streaming right to the expo floor. As we are showcasing the best anglers in the world, competing for the biggest title, we will also be celebrating our fantastic industry. This will be a unique experience for fans who will certainly travel from near and far to attend."

The following paragraph points out that MLF is "truly a complete team with everybody pulling the rope in the same direction, including the anglers, the MLF management and our media partner." (Note: The media partner is Kroenke Sports and Entertainment, also BassFan's parent company). It states that all 80 MLF anglers will be at Redcrest and those not competing will work the expo floor. Then, in bold-face letters, comes the following sentence: "Our anglers are not allowed to promote competing leagues and therefore will not be attending any other league expos."

That one met with resistance in some sectors, prompting the flexibility on MLF's part for next year.

"Ultimately, it's not a big deal whether we do or don't work the Classic one more year and we'll do it if it'll keep the level of heartburn down," Duckett said. "But this thing (Redcrest) is coming and it's going to dominate. We're not going to quit doing all the right things that will lead to an expansion of the sport."

Dave Precht, B.A.S.S. vice president/editorial & communications, said the organization had no official comment on the contents of the MLF email.

"We have always welcomed FLW anglers to attend the Classic and work the Expo, and we extended that to MLF anglers during the 2019 Classic, which many of them attended on behalf of their sponsors," Precht said.

Of the 52 competitors in this year's Classic, 36 were current MLF anglers who qualified through last year's Elite Series points list or other B.A.S.S. events. As of now, it's likely that no one from the MLF roster will fish the 2020 Classic.

Duckett reiterated a point that he'd broached previously: He said he attempted to get B.A.S.S. to partner with MLF during several stages of the latter's evolution, but was turned down at each juncture.

"It doesn't take from 1969 to now to do what B.A.S.S. has done – it only takes that long if you move at a snail's pace. I don't move at a snail's pace – it's coming, trust me. This thing (MLF and the inaugural season of the BPT) is tracking pretty good and people should be getting on the train to help us. They obviously can't do it themselves, because they haven't. Let us be the vehicle that takes you to new places. Just have a little faith."

Time for a Push

Duckett pointed to the popularity of MLF television broadcasts and the buzz generated by the first four BPT events as evidence that such faith will pay dividends.

"We're the only league that's succeeded in growing the sport outside the same core base in the last 20 years," he said. "We have tens of thousands of people who've never paid attention to bass fishing who watch Major League Fishing. We've legitimately brought the sport to a lot of new people in terms of awareness and some of those people have become participants. It's a tremendous investment, and who benefits? The manufacturers and our industry.

"It feels like that at times you have push people to get them moving in the right direction – they need to support this because they're going to be the beneficiaries. If some of the sponsors don't have as much entrepreneurial spirit as I have and if their risk-tolerance is less than mine, then we'll find a way to work with them."