Getting Away From Crowds Was Critical

Without this 8-10 kicker on day 5, Jared Lintner most likely wouldn't have qualified for the Championship Round at Lake Chickamauga.

It didn’t seem to matter where anglers went at Lake Chickamauga during last week’s Bass Pro Tour, the fish were shallow, and they were biting. The event showcased the lake’s burgeoning population of bass – more than 3,800 fish were caught weighing more than 7,400 pounds – despite the lake receiving intense fishing pressure throughout the week.

The key to gaining separating from the field, though, seemed to be just that – finding key stretches off away from the crowds. Whether it was up river from Dayton (like winner Andy Morgan or third-place finisher Todd Faircloth) or in the dirty, warm water of the Hiawassee River (like fifth-place finisher Mike Iaconelli), having areas that weren’t constantly being pounded was a dominant theme for the rest of the top five.

They employed a variety of tactics to catch bass in all phases of the spawn with just about every one coming out of 3 to 5 feet of water or less. Here’s a breakdown of how the other top finishers, all of whom came out of Group B, spent their time Chickamauga:

This was Jared Lintner’s second visit to Chickamauga and in practice he found a backwater with some clear water and hydrilla in it.

He also noticed a lot of other anglers fishing similar scenarios – “secondary pockets off the main river and fishing any sitck or log on the bank,” he said. “I had to find something different.”

He shifted his focused to transition areas, “where they’d set up prior to going into the pockets,” he said. “I noticed a bunch spawning on transition banks. My boat was in 20 feet and it’s a chunk rock bank, but there’s a 3-pounder sitting on a rock in a foot of water. If a piece of wood was there, they’d spawn on that, too.”

He felt like the fish in those areas were safer bets with the fluctuating water levels.

“I caught a lot of key fish off those kinds of banks,” he said. “I caught them where they should be staging. I didn’t sight-fish them, but they were spawners.”

He started the Group B Shotgun Round in the backwater he found in practice and caught several before moving on to other areas.

It turned out to be a blessing as he came across the big fish of the tournament at his next spot. Catching the 8-10 solidified his spot in the finals.

“I was fishing down a stretch and I’d caught a couple and I’d fished there the day before, but didn’t see anything,” he said. “I look down and see a giant swim off a rock. It’s a little mud flat, maybe 20 feet long and there’s one white rock on it the size of a volleyball. I hadn’t seen it before.

“I spin around and I’m looking for her. I start flipping and pitching craws at her and she’s milling around. She’s not on a bed or excited. I fish down the bank and eased back through there. I was still a pretty good ways out so I bomb a Ned rig out there. She’s facing the bank and away from me and that rock is three feet in front of her. My bait landed 10 feet in front of her. I shake the bait a little and I see her body tense up. I popped my rod and the bait jumped and I see her gills flare from the back. She sucked it in from 2 or 3 feet away. I slowly reeled back and said, ‘Oh my God, I got her.’ I’ve caught a lot of sight-fish, but to see it go down and see her gills like that was incredible.”

His primary tactic was powershotting, a souped-up dropshot fished on casting tackle. A Ned rig was also productive, especially on the final day in areas protected from the wind. 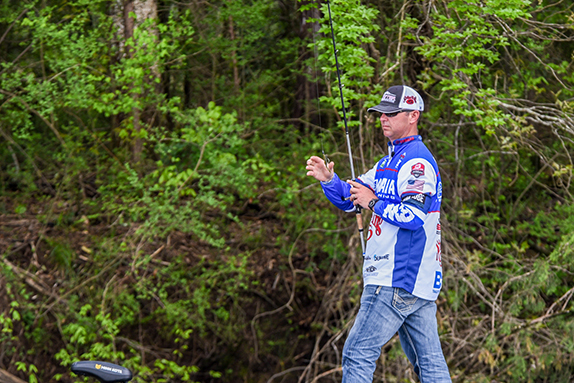 
Todd Faircloth made a move upriver on day 2 and parlayed it into a top-3 finish.

Todd Faircloth admits he’s still trying to figure out the most efficient way to practice for a Bass Pro Tour event, but he seems to have the tournament part figured out as it was a mid-tournament audible that earned him his highest finish yet this season.

“Practice wasn’t great, but it wasn’t terrible,” he said. “I feel like I’m still trying to figure out how to practice for these. We basically get 1 1/2 days and it’s a lot harder to judge what you’re on. I find myself going into an area and if I get two or three bites, I used to fish the whole area. Now, you can’t do that. You have to cover as much water as you can and look at as much as you can because you don’t know what will change.

“I’ll run around and take notes and drop waypoints, then come back in the tournament and fish it. It’s just hard to get a judge on practice because it’s just little snacks instead of big bites, but it turned out better than I anticipated.”

Over the first 1 1/2 days, he was down lake where he caught fish flipping a creature bait and on a wacky-rigged worm. Halfway through day 2, though, he headed up river to fish some stretches with dirtier water.

“That totally changed the outcome for me,” he said. “I avoided missing the cut to making a top 10. If I don’t make that call, I don’t get paid this week. The fish were not near as spooky and there was a lot less (fishing) pressure versus down the lake. There were fewer locals, too. I basically had it to myself.

“That was huge because you don’t want to go behind these vacuum cleaners.”

Up river, he targeted any piece of wood that was in the water, be it a blowdown or an overhanging tree limb that plunged into the water. A Texas-rigged creature bait was his preferred flipping option.

“Some pockets definitely had more blowdowns than others,” he said. “The biggest key for me was I caught most of my fish in creeks and pockets closer to the mouth up the river. A lot of stuff up there is flatter and with them fluctuating the water (level), they were more stable.” 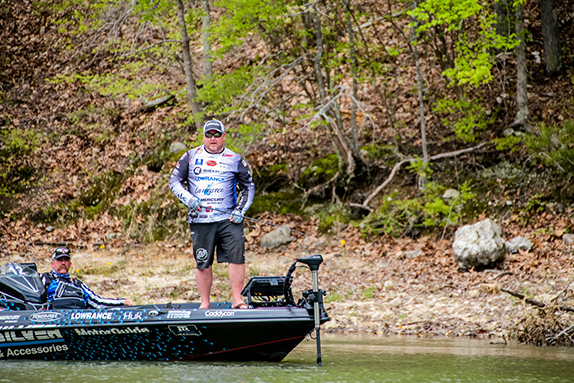 
Jacob Powroznik spent the majority of the tournament with a spinning rod in hand, pitching a wacky-rigged worm to areas he felt fish may be spawning.

When Jacob Powroznik arrived at Chickamauga last week, he pretty much knew how he was going to attack the lake. Heck, easing away from the ramp on the first day of practice, he spotted three bass on beds.

“The first pocket I went into, I got 10 bites,” he said. “It was the same all week from the time I started until I finished. I fished shallow, throwing to dark spots, stumps, a patch of grass or even a bed.”

That formula netted him a total of 100 bass over four days of competition, including a stout 36 for 67-14 in the Knockout Round alone.

“I basically fished the same areas that I fish every time I’ve been here whether it’s been won shallow or deep,” he added. “Water clarity was a big key. I had to be able to see something that sat out by itself. That’s where they were.”

He tried to fish new water (to him) each day, but fished the same way all over the lake as he relied on a wacky-rigged V&M Baits Trickster worm.

“It’s just a good way to generate bites this time of year,” he said.

While the weather on the final day was an obstacle he ultimately couldn’t overcome, he had no regrets about how he managed the event.

“I would do nothing different if given the chance,” he said. 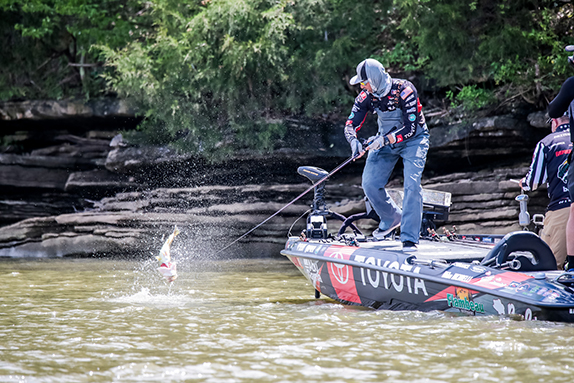 
Mike Iaconelli spent most of his tournament in the dirty, warm waters of the Hiawassee River.

Mike Iaconelli had competed at Chickamauga just once before – the 2014 BASSFest in which he finished 42nd – but it was knowledge he gained during that visit that helped him plot a successful course last week.

“I remember committed to the lower end in that tournament because it was more of a post-spawn, summer bite,” he said. “I knew the bigger fish lived down there, so I took some of that and reversed it. I knew the fishing pressure would be more intense down there.”

He decided the closest he would get to the lower end of the lake would be mid lake, simply to avoid crowded areas and having to fish behind other competitors and locals.

“I wrote a lot of that off and basically started with the mindset to look at new areas,” he said.

That led him to the Hiawassee River, which flows into Chickamauga from the east. The water was dirtier and warmer in the Hiawassee and that’s what kept Iaconelli coming back.

“It was legitimately the dirtiest water on the whole lake and that allowed me to power-fish,” he said. “I didn’t have to pull out a spinning rod like a lot of guys and it let those fish stay shallow and made it easier.”

While those down the lake were focused on pre-spawn bass and some already in bedding mode, Iaconelli is convinced the majority of fish he caught were post-spawn.

“It still blows me away, but they had of the typical post-spawn signs – bloody tails, sores on their gill plates, skinny,” he said.

Iaconelli said 80 percent of his fish were caught winding a crankbait along natural rock and riprap where a channel or ditch would swing and hit the shore near the rock. He said the Lowrance C-Map feature, which allows users to shade different depth zones, let me pinpoint areas that had the ingredients he was looking for.

“That allowed me to look at a spawning bay or creek and where those ditches or creeks would touch the bank,” he said. “When I found that combination around rock or riprap, that was pretty consistent. I didn’t catch as many big ones as others, but it just came together for me.

“All of my bites were in the zero to 3-foot range. I’d throw it to the face of the rock and grind it back. I’d make repetitive casts and deflections were key. When it would careen off those rocks, that’s when I’d get bit.”

> He also caught several fish on a 1/2-oz. Molix Waterslash spinnerbait (shad) fished around docks where there was a shad spawn happening.

> He caught a few pitching to laydowns with a 4” Berkley PowerBait Pit Boss (Okeechobee craw) rigged on a 4/0 VMC Heavy Duty flipping hook under a 5/16-oz. VMC tungsten worm weight.