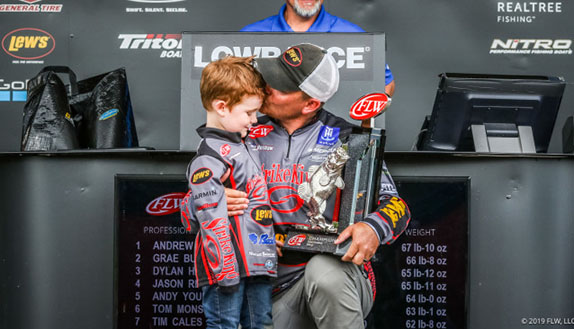 Quickly recognizing that a lot of smallmouth were spawning was a big key to Andrew Upshaw's victory at Cherokee Lake.

Luck often plays a key role in any slugfest tournament, which the FLW Tour event on Cherokee Lake certainly was. So you might look at Andrew Upshaw’s victory as him simply being the luckiest. If you did, though, you’d miss what was a remarkably executed game plan from start to finish.

From the first day of practice to his final move to a reserved area in the final hour that won him the event, the Tulsa, Okla., pro put together a well-thought-out plan of attack. Doing so allowed him to manage his fish, catch fish behind others, withstand intermittent weather changes and boat just enough fish to pull off the wire-to-wire victory.

Here's a look at how Upshaw formulated and executed his plan.

Upshaw is by no means a smallmouth expert, but he’s well regarded as a sight-fisherman. Thus, when he first got to Cherokee, the conditions told him to investigate whether or not there were fish on beds. Sure enough, there were, and a look at the forecast told Upshaw all he needed to know.

“Almost immediately I realized how much the smallmouth were spawning,” Upshaw said. “I think it took other guys a lot longer. That gave me three days’ advantage of figuring out how they were setting up and what they wanted to eat.”

The "where" ended up being a significant key for Upshaw. While Cherokee is chock full of rocks and doesn’t have much current, Upshaw figured out that if any straight bank had a turn in it with rocks on the turn, that would create just enough of a current break for the smallmouth to feel comfortable spawning.

Once he figured that out, it was simply a matter of running around marking them – he figures he had more than 120 spots marked by the time practice ended – and then figuring out which ones were the best.

“Some of the spots were one-fish deals,” said Upshaw, “but some were multi-fish. There was no real reason to why one would be one way or the other. They were all in about the same depth; same rock. Some just had more fish in them.

“And they were small areas. I mean, the size of your boat. But my best areas I’d get 15 bites in from different fish.”

While everyone knew Cherokee was loaded with fish, hardly anyone expected what occurred the first two days of the event, with seemingly everyone catching limits of fish at will. Problem wass, while it was easy to catch a limit, it was tough to upgrade, as fish over 3-pounds were at a premium.

Of course, when you have a handful of 3s and 4s marked from practice and you can run to them first thing and catch all of them in short order on a wacky rig, it does make life easier. Upshaw figures he was done fishing by 10 a.m. on day 1 after he’d caught two more 3-pounders that wouldn’t help him.

For the rest of the day he went looking for a truly big bite. He nearly got it, too, when he had a 6-pound largemouth follow in a big glide bait.

Day 2 was almost a rinse-and-repeat of day 1. He caught a 4 1/2-pounder within the first 15 minutes, then actually started rerunning to fish he’d hooked and thrown back the day before.

“Those smallmouth were spawning so hardcore you could go back and re-catch fish you’d already caught and thrown back,” Upshaw said. “I’d never seen anything like it. I mean, I broke off a 2 1/2-pounder on day 1 and Scott Martin caught it later that day. It still had my hook and worm in its mouth.”

There was one notable difference between days 1 and 2, though.

“I had some time, and instead of going after another kicker, I wanted to look around takeoff and the release area for something just in case,” Upshaw said.

Using his Garmin Panoptix, he found a pile of boulders on the side of a point that topped out around 10 feet. He sampled it with a Strike King Rage Swimmer and caught a 13- to 14-pound limit, and he filed that spot away as a just-in-case spot for the final day.

He’s certainly glad he did. Day 3 turned out to be survival day, as he made his lone misstep with the execution of his game plan. He opted to start on a lesser-known area, and it nearly burned him, as it threw off his groove for awhile before he could “chip away” and catch the 16 pounds he figured he’d need each of the last two days.

Upshaw learned from his mistake, though. While he originally thought about starting on his rock pile the final day, he scrapped the riskier pattern and once again re-hit some of his best spawning areas. He caught a quick limit, but late in the morning more rain hit the lake – an issue throughout the event – followed by plenty of wind; all of which seemed to kill the bite. Upshaw would go 6 hours without culling up a single ounce.

In the final hour, he made the tournament-saving decision to go to his rockpile, and with 30 minutes left he caught 3 1/2- and 2 1/2- to push him to the win.

> He also mixed in the Ocho on a Ned rig at times just to give the fish a different look.

> Main factor in his success – “My game plan. I was able to cover a lot of water in practice and learn everything I could. Then it was just a matter of putting my game plan into motion, and obviously using my down time during the event to find that second spot on day 2.” 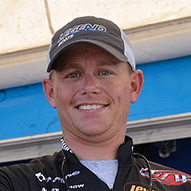