Ike’s Rally Carries Him Into Final Round 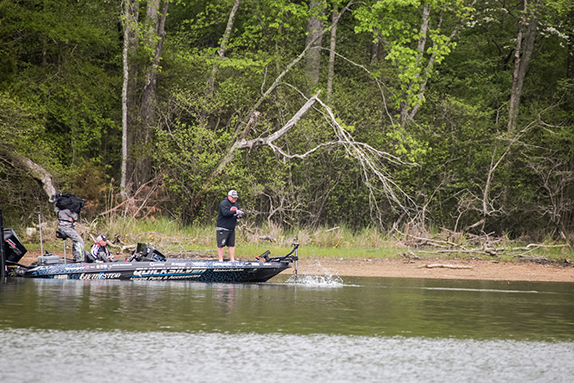 Jacob Powroznik works to land one of his 36 bass today en route to winning the Knockout Round at Lake Chickamauga.

When time ran out in the Knockout Round at the first Bass Pro Tour event this year, Mike Iaconelli wasn’t too pleased about finishing 11th.

At the second event, he wound up 21st in Group A, less than 2 1/2 pounds from getting into the KO Round. At Raleigh a couple weeks ago, he made the Knockout Round, but wasn’t a factor to advance to the Championship Round.

Behind a furious third-period comeback today, Iaconelli will be among the 10 anglers heading back out on Lake Chickamauga on Sunday to finish what’s been a catch-fest of a tournament. Iaconelli was 22nd after the second period Saturday before catching 13 fish for 31-04 over the final 2 1/2-hour segment. In the last 30 minutes alone, he racked up 23-03 which included a 6-03 and a 4-01 within two minutes of each other.

“In my 22 years or however long I’ve been doing this, that was the most incredible, amazing 20 minutes of my career,” Iaconelli said. “It was happening, and it was almost like I couldn’t believe it. It was like it was happening around me. I never use the word luck, but when that happens, you really are fortunate.”

He said he’d fished the same stretch earlier in the day and he’s certain others did as well, so he wasn’t expecting to catch what he did.

“I know that stretch had been hit multiple times earlier in the day so it’s not as though I found something magical or hidden or had a secret bait,” he said. “I just timed it perfect to when I pulled up those fish started to feed. And it happened when I needed it to happen.”

His late-day rally carried him to a 3rd-place finish with 59-08 (28 fish), trailing only Jacob Powroznik and Todd Faircloth once everyone reeled their line in for the final time.

As a result, he’ll get to compete on Sunday for the first time this season.

“It feels great,” Iaconelli said. “I’ve had a good year, but it seems like at key moments toward the end, I just fall short. There’s something that has always kept me from making it. Today, it all worked in reverse.”

With weights zeroed for the final round, he doesn’t anticipate changing much about his strategy. By securing a top-10 finish, he’s mathematically clinched a berth in the Heritage Cup, the second of four MLF Cups to be contested later this year.

“I’m going to try to win tomorrow but if I don’t I feel like I won already,” he said. “I’m going to stay the course. I’ve been in the same area with the same pattern for 3 days, so no big changes for me. The only thing I’m looking at is the wind. We didn’t have much today until the afternoon and that’s when I had my best flurry.” 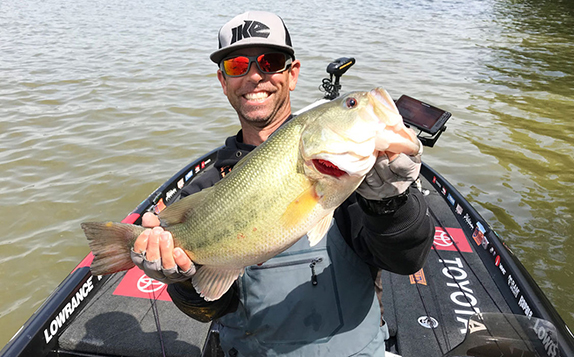 
Mike Iaconelli was all smiles after a wicked third-period flurry carried him to a berth in the Championship Round.

Powroznik caught at least 20 pounds in all three periods and finished with 67-14 (36 fish) to assure himself a chance to win back-to-back events. Faircloth trailed him by just over four pounds as he tallied 63-12 (31 fish) with 33-06 coming in the first period.

To complete the gauntlet on Sunday, someone will have to outperform Edwin Evers (four-time finalist and winner at Lake Conroe), Powroznik (winner at Raleigh) along with Dayton natives Andy Morgan and Michael Neal.

Powroznik is fishing with a ton of confidence right now because this is the time of year he excels.

“I guess I put my eyes to work more than anything and I’m seeing where I need to cast,” he said. “I’ve caught a few I’ve looked at, but most are blind casting to dark spots.”

Like Iaconelli, he doesn’t see himself straying from what’s worked so far. He feels his success this week is due to his fishing shallower than most others. If he’s to win a second straight event, he thinks it’ll be sticking with that game plan.

“I fished about the same pockets for the last couple days,” he added. “More and more (fish) keep coming. We’ll go fishing (tomorrow) and see what happens. I’ve made it this far, so if it’s meant to be it’s meant to be.”

Jared Lintner continued his strong season by surging from 19th to 8th in the afternoon, thanks to a tournament-best 8-10 kicker that anchored his 22-10 third period.

Faircloth came into this week 15th in BPT points, but he’d yet to make a Championship Round. His massive first period went a long way in helping him finally reach one.

“I’m excited,” he said. “I think it’s anybody’ game. I didn’t back off today. I never felt safe enough to do that. Around 10 to 12 pounds separated me from 10th all day and with this group on this fishery, you can never feel safe. I fished hard today and didn’t let off and still didn’t catch as much as Powroznik did. If a guy can maintain a similar pace tomorrow, he’ll have a shot to win. There will be no holding back tomorrow.”

Faircloth tangled with a quartet of 3-pounders in the first period as he picked up in the area where he left off Friday. That was important as it allowed him to sample a part of the lake that he felt wasn’t getting as much fishing pressure as where he’d been fishing.

“It just didn’t seem to be as busy as where I’d been fishing and that was critical,” he noted. “This place is getting pounded right now and pressure is taking a toll on some places. Tomorrow, I’m going fish through some stuff again, but it’s important to keep looking for new water, knowing at the same time it’s not new, but it’ll be fresh to me.”

Rain passed through the area during the second period today, then it cleared up, but more rain is on the way as scattered thunderstorms are expected to move in tonight. Morning storms are predicted for Sunday with close to a half inch of rain in the forecast along with winds in the 15 to 25 mphs range.

> Additional details will be published shortly.