Cherokee ‘On Fire’ For Tour Stop No. 5 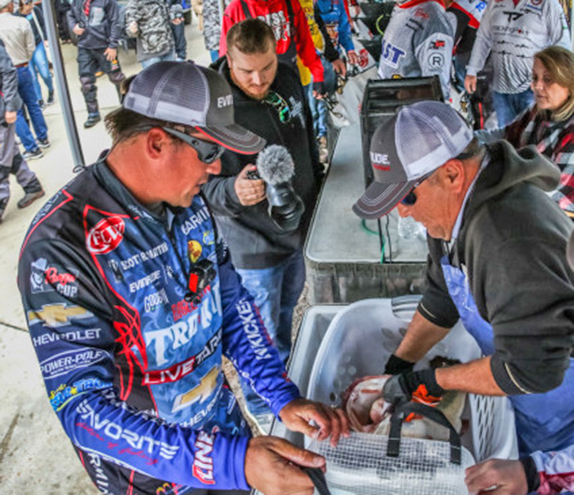 Scott Martin (left), who has a propensity for catching smallmouths and fishing highland reservoirs, is a guy to keep an eye on in this week's FLW Tour event at Cherokee Lake.

Cherokee Lake may be experiencing the best of times and the worst of times.

On one hand, the fishing could hardly be better as the FLW Tour visits the fishery for the first time. Despite a relative lack of history, pros are reporting being able to catch fish just about any way they want.

Want to target bedding smallmouths – the predominant species in the lake? Go ahead. Want to power-fish shallow rock? Sure. Want to fish big swimbaits? Vertically out deep? Topwaters? It’s all in play, with guys saying you can catch them from one dam to the other.

Basically, after a brutally tough Grand Lake event a couple weeks ago, pros are thrilled to be setting the hook and getting more than 30 bites a day in practice. Yet, that may also be the problem.

Cherokee is not the biggest lake, and while it has plenty of fish, it’s not a fishery with a never-ending supply.

“Guys may be catching them great [in practice], but come Thursday they may wish they hadn’t,” said Tour rookie and local Brant Grimm

With that in mind, let’s take a look at the curveball on the Tour’s 2019 schedule.

When most every pro is commenting on how good the fishing is, you take notice. But when Grimm and his 20 years’ experience says it’s fishing the best he’s seen, that’s really something.

What that big bag will consist of is the question.

Grimm says smallmouth are the main species in Cherokee, and while it has some chunkers in it, 3-pounders are hard to come by. Meanwhile, the lake has some healthy, bigger largemouth. Problem is, they’re quite fickle and can burn an angler bad.

“I think you’re going to have to target both to win,” Grimm said. “Guys may want to try and get quick limits of smallmouth before trying to target a kicker largemouth.”

Thing is, there is no one place to do either. While Grimm admits the main lake is a little better for the smallmouth and the rivers for the largemouth, the two species are prevalent throughout. Plus, with how small the lake can fish and the fact that the fishing is good throughout, Grimm thinks anglers may need to fish the entire lake to be successful.

Think of it similarly to a much more familiar fishery for the Tour – Beaver Lake. Both are highland impoundments that fish small at times; are very rock-based for structure; have decent but not outstanding populations of fish; and where 4-pounders are like gold. Another similarity is that guys who do well on Beaver often never fish the same place twice in a tournament. That may come to pass at Cherokee.

With all that, Grimm expects a very tight leaderboard in terms of weights, and any angler looking for the win simply can’t fall behind.

“This isn’t like the first four places we’ve gone where you can make a comeback with some big kickers,” Grimm said. “You fall behind, you’ll stay behind.

“Right now, it’s fishing so well; too well, maybe. Guys are going to have to adjust, because this much pressure is going to hurt the fishing on a lake like this.”

Brad Knight
“It’s fishing about like I expected. It’s April in Tennessee. This fish are going to bite. It’s basically been pick your poison on what you want to do.

“I used to fish team tournaments here years ago. One of the things about this lake is it’s very weather dependent. So it’ll be interesting to see what happens as the weather changes come the tournament (it’s been mostly raining nonstop throughout practice).”

Greg Bohannan
"It’s been good. I’ve never been here before, but it fishes a lot like the Ozark lakes back home. It reminds me a lot of a Beaver Lake or a Bull Shoals.

“I think you’re going to see the weights really bunched up, but it’s fun. After my last two tournaments, I’m really happy to be setting the hook again.”

Bryan Schmitt
“If my dumb butt can come out on a lake like this and catch them as well as I have, you know the fishing is good. It sounds like we’re hitting it just right.

“My only question is how much is practice going to hurt the fishing. Is there an unlimited number of fish? I don’t think there is. So it doesn’t seem hard to get bites right now, but when every shallow fish has been caught twice in practice, it may not be so easy come Thursday.”

“Problem is, those bigger bites seem to be largemouth, and from what I’ve seen, the largemouth in this lake are resident fish. So I don’t think they’ll hold up.”

Here are a handful of anglers who might fare well considering the way that Cherokee is set up this week.

> Brant Grimm and Corey Neece – Two rookies who are relative locals, and both have BFL wins on Cherokee.

> Austin Felix – One of the best smallmouth fisherman on Tour should know how to catch bedding brown fish he can’t see.

> Scott Martin – He's quite adept at catching smallmouth, and he’s shown a propensity for doing well on highland impoundments in the spring.

> Bradford Beavers – He’s made back-to-back top 10s, and word is he’s been catching some giants in practice.

Anglers will take off at 7 a.m. EST from TVA Dam Boat Launch, located on Renfro Road in Jefferson City, Tenn. Weigh-ins on days 1 and 2 will be held at the ramp beginning at 3 p.m. Weekend weigh-ins will also be held at the ramp, but will begin at 4 p.m.

The FLW Live on-the-water program will air from 8 a.m. to 2 p.m. on days 3 and 4. The broadcasts will be live-streamed on FLWFishing.com, the FLW YouTube channel and the FLW Facebook page.