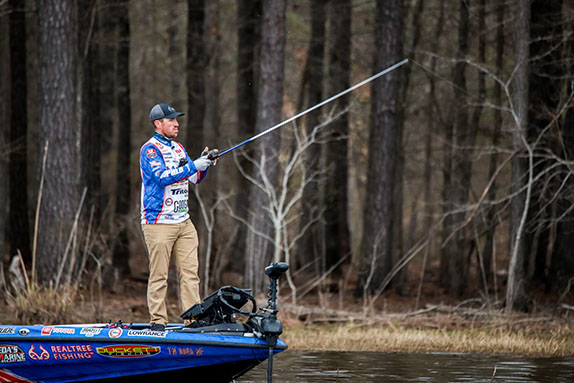 The 2nd- through 5th-place finishers in the recent MLF Bass Pro Tour event in Raleigh, N.C. all had one thing in common – each had a strong Shotgun Round at Jordan Lake. None of the quartet sat lower than 6th in their group standings following the first of what would eventually become four days of competition.

None of them registered a lot of weight in the Elimination Round at Falls Lake; they didn't need to, as their Shotgun Round performances had given them ample cushion toward advancing out of their groups and allowed them to use the day as a bonus practice session. Each racked up at least 23 pounds in their second crack at Falls during the Knockout Round, with eventual runner-up finisher Jacob Wheeler doubling that mark en route to a berth in the Championship Round at small but fertile Shearon Harris Reservoir.

Following are some of the specifics of how Wheeler, Takahiro Omori, Edwin Evers and Mark Daniels Jr. approached the three-venue event.

Wheeler spent the shorter of his two practice days on Jordan. He flipped bushes for half the day and never got bit, then threw a prototype Googan Baits vibrating jig around the same vegetation with only moderate success.

Things started to come together when he ventured into some pockets and targeted hardwoods with the vibe jig. That's what he employed throughout the day in the Shotgun Round, resorting to flipping a Googan Baits Bandito Bug only when a fish had swirled on but missed the faster-moving offering.

"The biggest thing was that, being in the first group that fished Jordan, I knew I could cover a lot of water and everything would be fresh," he said. "I didn't care if there were 30 fish in a pocket, I just wanted to catch the five easy ones and move on."

He threw the vibe jig in the Elimination Round at Falls, but shrink-wrapped to hook to keep from catching the fish that bit – most of which were in one spawning pocket. He estimated that he shook off 40 pounds worth, so his confidence level was high for his second day on that body of water.

He used the Bandito Bug as a trailer in the Knockout Round to give the bait some buoyancy in the extremely shallow water and put together another massive haul to advance to the Championship Round.

With Shearon Harris being a power-plant lake that experienced several warm nights in a row prior to the finals, he correctly surmised that a topwater offering would be effective. He tied on several and got a good bite early on a frog imitation, so he stayed with that all day.

"I was pretty sure those fish would be further along and more into the spawn than the ones at Jordan or Falls," he said. "The first fish I caught was post-spawn, so some were probably feeding up to go out and get on their summertime holes."

He had a huge second period (35 pounds) and possessed a double-digit lead at one point, but winner Jacob Powroznik had a similar final period and eventually overtook him.

"I caught about 90 percent of the fish that blew up on that frog," he said. "That's a pretty dang good day." 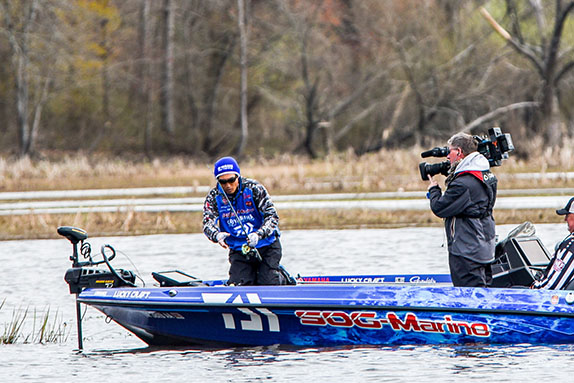 
Takahiro Omori flipped and pitched through the first three rounds, then threw a ChatterBait in the finals.

"I fished the buck brush, willow trees or any wood cover," he said. "Jordan had a lot more of it than falls because the water level was higher, but I stuck to woody stuff the whole time at both lakes.

He caught all his fish in the Championship Round on a Z-Man ChatterBait with a Z-Man RaZor ShadZ trailer.

"I had enough bites to win," he said. "I jumped off two good fish and missed like four or five more. I only caught two keepers in the first period, so I wasted a lot of that time. Losing or missing fish happens to everybody, but I didn't adjust fast enough."

He started the day throwing a spinnerbait at pad stems in the back of a creek and pitching the Sweet Beaver to anything that protruded from the bottom. Neither tactic was productive.

He eventually determined that a lot of fish were spawning at the base of sawgrass clumps. Some of those were in wind-protected pockets, but the overcast conditions made it all but impossible to sight-fish, so he started paralleling the bank with the ChatterBait.

He was in and out of 10 or more pockets and worked his way toward the top of the leaderboard in the second period, then remained within striking distance of the top position for the remainder of the day.

He said he's been wearing Glacier Gloves for a couple of years and they were a big benefit in this event, when he handled a large number of fish. He recommended that BassFans try them (or a similar product from one of various other manufacturers).

"Even after catching so many fish in a week, my hands aren't beaten up by their teeth," he said. "Now I can't go without that glove." 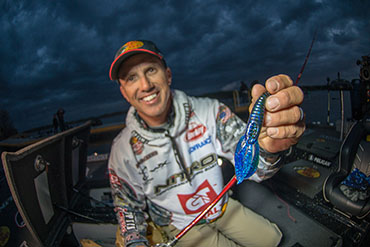 A few of Edwin Evers' 46 fish for the event were enticed by reaction baits, but flipping was his main program at all three lakes as he recorded his third straight finish of 4th or better in three BPT events.

"My practice day at Jordan was the short day and I ran from one end of the lake to the other, jumping around in the main river and up in the pockets," he said. "I was throwing reaction baits – spinnerbaits, vibrating jigs and crankbaits – and I realized the day was almost over and I'd hardly had any bites. I figured I'd better slow down."

He got several bites over the last couple hours of the day flipping a Berkley PowerBait Pit Boss and parlayed that program into a 50-pound haul on the first competition day.

"It eventually evolved from the Pit Boss to a jig. I lost one at the end of the first period and after the break, I thought I'd show that fish something new, so I pitched back in with a half-ounce jig with a (Berkley) MaxScent Meaty Chunk and caught it, and it was a 4-pounder.

"After that the bites went through the roof. I think they could smell it."

He was determined to catch a few fish in the Elimination Round at Falls just to ensure he'd make the top-20 cut. One was an 8 1/2-pounder on the Pit Boss and he described the super-shallow strike as "like pulling the plug on a giant swimming pool." He picked up a few more by throwing a jerkbait on secondary points.

For the Knockout Round at Falls, he headed straight for the pocket where he'd caught the giant, but found the water level had dropped and it wasn't harboring nearly as many fish. Nonetheless, he managed to boat eight that put him in 6th place for the day and earned him a berth in the finals.

He caught a couple of early fish at Shearon Harris on a vibrating jig, but that action quickly died off. He saw a few fish on beds, so he started blind-flipping likely spawning areas, and that tactic put him in the lead at the end of the first period. He alternated between the Pit Boss and a Berkley MaxScent Creature Hog.

"It was weird," he said. "You'd go and go and not get any bites, then you'd hit a 20-yard stretch and get three bites. Looking back, I figured it out – the good-looking stuff like the backs of the pockets, I wasn't getting any bites. There'd been a tournament there the day before and I was getting my bites from the front halves of the coves where I don't think the locals had fished the previous day." 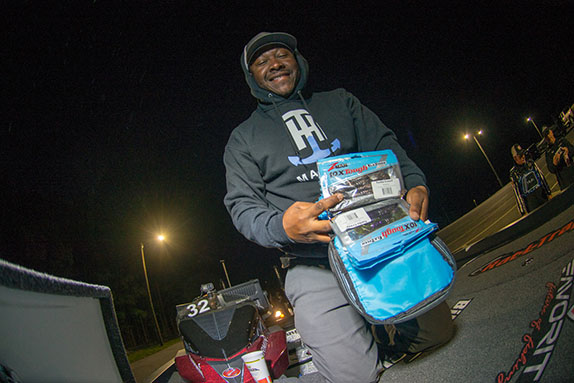 Mark Daniels Jr. qualified for the Championship Round with one position in the standings to spare, but it was nonetheless an extremely close call. He was 3 1/2 pounds out of the top 10 with six minutes left in the Knockout Round when he caught a fish that weighed 3-13.

His big weight in the Shotgun Round at Jordan was compiled with a flipping stick with a Z-Man Turbo CrawZ. His average fish weighed well over 4 pounds.

"The fish were in the bushes and also on the bases of willow trees," he said. "That lake was incredible, man. If you caught 10 fish in the pre-spawn or spawning areas, three of them were going to weigh over 5 pounds."

He used the Elimination Round at Falls as a practice day. He deliberately avoided catching any fish, but was greatly concerned after getting only three bites.

"I ran around and looked at some areas I hadn't seen previously and late in the day I ran up the river to where it splits. On the way back down I noticed a big, wide creek – it's called Knob Creek. It looked good, but it was really shallow."

In the Knockout Round, he had no action in the areas where he'd gotten the three bites, but caught a 3-10 late in the morning from a place where he'd gotten a few bites on his initial practice day prior to the event. He later cranked a 2-10 from a bridge, but had no more success with that program.

"I had nothing to lose, so I ran up to that flat creek in the final period. It was slow fishing and I had my trolling motor raised as high as it could go because I was flipping bushes that were in 8 to 10 inches of water. My first fish was a 4-something and I caught five more after that. Whenever I came to a decent-size bush or a willow tree, I'd get bit.

He threw a vibrating jig exclusively in the Championship Round at Shearon Harris. He used a green-pumpkin bait in the clearer water toward the main lake and bruise/green-pumpkin in the backs of creeks.