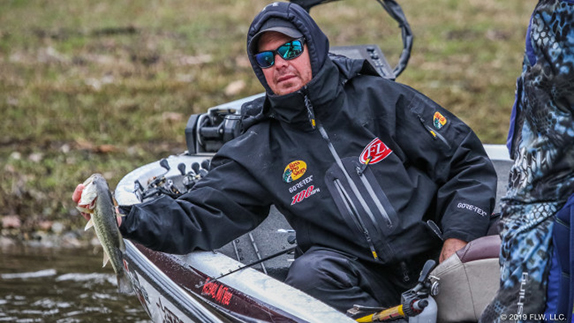 Michael Matthee found his comfort zone with a spinnerbait at Grand Lake.

Grand Lake was a grind last week, but some in the 165-man FLW Tour field took that a challenge. Only a select few conquered it.

Just 83 limits were caught through the four-day tournament and only one angler – tournament champion Jeremy Lawyer – brought five on stage each day. He relied on history and a bevy of spinnerbaits to get the job done.

Others also threw spinnerbaits, but the rest of the top 5 finishers got tripped up at some point during the event whether by the conditions or fish leaving an area as the pre-spawn procession played out.

Docks and shoreline hard cover (wood, rocks) were the most frequently targeted options while fifth-place finisher Bradford Beavers made hay in the Elk River, where he pitched finessey soft plastics to laydowns and other submerged wood.

Here’s a rundown of how the rest of the top 5 went about their business at Grand:

Michael Matthee was in his element at Grand Lake, getting to heave spinnerbaits all day long.

“I grew up throwing a spinnerbait and if fish are shallow and I can catch them that suits my style. It all fell into place,” he said.

It took him until the tournament started, though, to get keyed in on what he needed to be throwing. In practice, he threw Texas-rigged plastics on points and cranked with a square-bill some. A spinnerbait only produced one bite during practice.

“Then on day 1, the first fish I caught came off a laydown and it had my spinnerbait in the back of its mouth,” he said. “That’s when I said, ‘This is the bait I need to be throwing.’”

His only hiccup all tournament was only bringing three fish back to the scales on day 1. Another keeper would’ve locked up the win for him. He said the fish seemed to be staging on timber on day 1, then they transitioned to docks with the sun shining.

By day 4, laydowns and chunk rock or “little spines of rock” was where he got most of his bites.

“Most of the bigger fish had a big shad in their mouths,” he added.

He said he tried throwing a big swimbait, too, but couldn’t generate the bites or the confidence needed to stick with it.

His spinnerbait choice (double willow with painted blades) was prompted by seeing plenty of other anglers relying on Coloardo blades.

“I always try to be different,” he said. 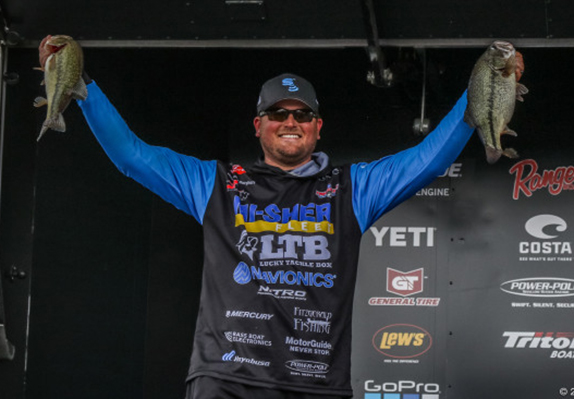 
Miles Burghoff has had plenty of reasons to smile this season as he now sits second in AOY points.

Like Matthee, Burghoff is in a position to look back on the tournament and wonder, ‘What if?’

What if he caught two – heck, even one – more fish on day 2? Still, it was another stellar showing for the rookie who’s now second in Angler of the Year points behind Terry Bolton.

“At the start of the year, I made no results-related goals like winning AOY, making the Cup or winning,” he said. “The only one I wanted was Rookie of the Year because you only get one chance at that. My goal was to make sure I don’t leave anything on the table and work hard at every event and let the results speak for themselves.”

He came away from Grand pleased with how he broke the lake down.

“What hurt me was day 2 with just three fish,” Burghoff said. “I didn’t realize how few fish had moved up. I went through the same areas that I went through day 1 and didn’t run new water with my spinnerbait pattern. That’s what hurt me. I couldn’t go through old areas and catch them.”

In practice, he realized that fish were accessible up shallow. He had a 14-pound day with a square-bill and spinnerbait to start practice.

“That keyed me in on the region of the lake I wanted to fish,” he said. “When I got zero bites the next two days, I knew that’s where I needed to focus.”

He found most of the fish were relating to docks. He caught a few on straight banks, but “when those fish move up to spawn, they like to be around docks even without a post to be next to,” he said.

Early on, he opted to concentrate on a series of creeks and pockets on the north shore in the mid lake area.

“I chose those because we’d have a north wind at some point that would hurt the south shore,” he said.

By day 3, he was targeting “less obvious stuff,” such as the areas behind long docks that didn’t have access to it from either side. He fished short pockets as well and that’s what produced the bulk of his day-3 weight.

“The common denominator was a somewhat 45-degree bank and the back end of the dock needed five feet of water under it,” he said. “They were in the back half of the creeks, but not all the way to the back.”

> Burghoff modified the spinnerbait by removing the stock willow blades and replacing them with a single size 5 gold Colorado blade. 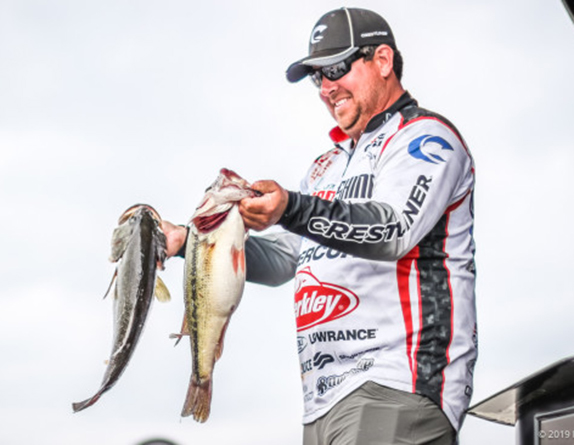 
John Cox focused on areas where the water was warming up and fish were pushing toward the bank.

Always on the hunt for shallow-water situations, John Cox found Grand Lake was made-to-order as he collected his second top-5 finish of the season.

“I knew the water was really cold and saw we had a little warming trend coming during the week,” he said. “That was exciting because I was preparing for when the water would be warming up and be able to catch some while they were sunning themselves.”

Practice was a struggle as far as generating bites, but he was focused on areas that might improve during the tournament.

“I knew something was going to change,” he said. “It was a case of hurry up and wait.”

By the final day of practice, though, he started to panic a little that he’d not laid his hands on a bass. He launched his boat at eight different ramps around the lake and spent roughly an hour exploring in each area.

“When I panic I do that, which is pretty much every practice,” he joked. “These open-mind sorts of tournaments are the ones I seem to do a lot better in. In the back of my mind, I thought I’d catch them because I had no idea what to expect.”

On day 1, he caught out of one area, then caught one at every subsequent stop, most coming within the first couple of casts. He keyed on rocky points halfway back into creeks as well as isolated wood in pockets, all with a spinnerbait.

“Random stuff I saw that I figured would have a fish on it,” he said.

Day 2 was his best day weight wise and after trying to recycle areas from day 1, he settled down in the area he started day 1 in and piled up more than 19 pounds, mostly with a vibrating jig.

“It was a long finger in a creek near the dam with a couple pinch points and a bridge,” he said. “I was bouncing around between it all. They were biting all over the place in there.”

Day 3 was his undoing as he thought he could ride the vibrating jig to another solid day despite the rainy conditions.

“That was a mistake,” he said. “The bites were much softer and they wouldn’t hold onto the ChatterBait. I think if I’d have switched to a crankbait, I’d have caught them. That day threw me off.”

The final day was similar to day 2 and he committed to the crankbait, which he worked parallel to the bank, contrary to how he fished it earlier in the tournament when the fish were staged away from the bank.

“I feel like I learned a lot, which was good,” he added. “Maybe I’ll retain some of it for later.”


Bradford Beavers leans into a bass while fishing in the Elk River en route to a top-5 finish at Grand Lake.

Bradford Beavers went against the spinnerbait grain and hunkered down in the Elk River, which he got to know quite well over the course of the event. He relied on a combination of slower presentations and picked off bass holding on blowdowns and just about anything laying the water, he said.

He started practice in the mid lake area and targeted points and banks leading into the pockets with little to no success. He moved into the Elk the following day and caught a couple small fish and one keeper. He returned for the final day of practice since he knew it has a reputation for harboring a population of bass.

“I went back in there to try to figure something out and caught a couple more shorts and a 4-pounder late in the afternoon,” he said. “He was on a piece of wood right off the main bank. I went around looking for other things just off the bank a hair – a willow or a log or a rock, anything laying in the water. I felt like that was my best shot to catch some fish.”

He started strong with 19-00 on day 1, but it was a grind. He spent 15 to 20 minutes on every piece of cover, firing cast after cast at it, but was often rewarded with a keeper bass.

He said had generated a pattern in practice elsewhere on the lake, he wouldn’t have been so patient.

“The fact that I had nowhere else to go and slowing down to that extent, I realized what the pattern was,” he said. “Those fish were on any hard object just off the bank.”

He thinks the fish were spawning on day 1 because when he’d catch a female, a male often followed soon after. He had fish drag baits and drop them, which is typical behavior for males guarding a bed.

“Fish were on almost everything in there, but it just took tons of casts to get them to bite,” he said. “If I had caught them somewhere else, I would’ve been long gone, but every fish built my confident that they were there.”

He settled into slow-down mode on day 2 and tapped into a new area where he had six bites late in the day. With the wind howling on day 3, he only generated five bites and landed four of them with a couple coming on a spinnerbait.

On the final day, he went back to the cove he found late on day 2 and found the weather had shut them off.

“As shallow as they were with the sun, I figured the flats would be warming up,” he said. “The fish were already in there trying to spawn so they hadn’t gone far.”

He worked over the last piece of wood in the middle of the cove for 25 minutes, but after putting his Power-Poles up, he caught a 3 1/2-pounder. After retying, he caught a 3 on his next pitch.

“After 11, they started biting and I caught a bunch of shorts,” he said. “I culled once later on. With the warm weather and it being so shallow in there, they started to feed with the sun out.

“I didn’t win, but it was coming together toward the end of the day,” he said. “I really feel like I was making good decisions in the last half of the last day. I’m thrilled to death.”

> In calm conditions, he relied on the 1/8-oz. version and when the wind picked up, he went with the heavier models.