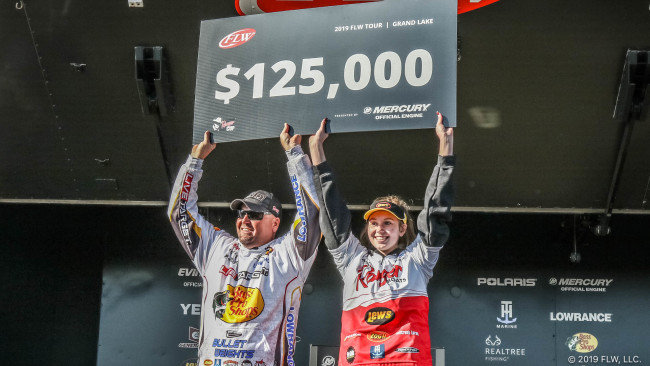 As a kid, Jeremy Lawyer used to come to Grand Lake with his grandparents to fish for white bass in the spring. Now, he’s partial to the black bass that swim there.

He’s competed in countless tournaments there over the years, winning a few local events and claiming top-10s in multiple FLW events. He lives an hour away, in Sarcoxie, Mo. It’s his home lake. Last week, he added a signature achievement to his Grand Lake résumé with his first FLW Tour win. It was an event he had highlighted on the schedule since it was announced last July.

“It was exciting just to have the opportunity to fish one on something I was familiar with,” he said. “I’ve not been through that. We went to Beaver during my rookie year (2017), but I hadn’t fished Beaver in 10 years.”

The victory also kept alive his hot streak which dates back to last fall when he won the Lake of the Ozarks Central FLW Series event. He’s not finished lower than 60th so far in the FLW Tour this season.

“Momentum is no doubt one of the biggest things that keep you going in the right direction,” he said. “When you get out of sync, it’s hard to get it back. I don’t know what gets that started. Joe Webster and I are both having good years and we’ve been working together 100 percent. At each event throughout the year, if one of us has struggled to get going in practice, the other one has fed him just enough to get on the right road. We have worked well together. That’s a big thing to this point. Fishing at home and fishing well. Those played a big role.”

The March-April time frame was something he has plenty of experience with. Back in 2016, he won a team tournament there in early April throwing a spinnerbait. Sure, crankbaits, jerkbaits and jigs can produce at Grand this time of year, but he knew before practice what he was going to rely on.

“I just felt my best chance to win was with a spinnerbait,” he said. “I knew as tough as the fishing was I could tie on brown jig and win 10 grand, but I couldn’t win doing that.”

His stubborn mindset also worked in his favor.

“Most times, you can’t get tunnel vision in these tournaments, but this was one of those events under those conditions that I could put my head down and being stubborn paid off,” he added. “I have fished a bunch the last three or four years with these conditions and that kept me in areas that I felt had potential for a bite or two.”

Here are some additional details about how Lawyer prevailed at Grand.

Lawyer went into practice with an open mind based on his background at the lake. Webster, on the other hand, was seeing the lake for the first time so Lawyer suggested he start in a particular creek arm and told him to “just fish how you fish and let me know what happens,” he said.

Webster got a few bites, which gave Lawyer an idea that the fish were in several different areas. Lawyer, meanwhile, got a feel for other parts of the lake. He got seven bites on the first day and opted to bypass similar areas over the next two days.

“I fished some brown jig stuff and cranked some,” he said. “I caught a couple, but there’s no way to catch five a day doing this. I eliminated several areas and that allowed my stubbornness to take over. I couldn’t do any better doing anything else.”

He had his mind made up that a spinnerbait would be his go-to option based on the conditions.

“When the water creeps into the 50s, it’s just had a history of being a fish catcher,” he said.

Lawyer prepared an arsenal of spinnerbaits for the myriad conditions Grand inevitably threw at the anglers during the tournament. And he used just about every one of them. Some had single blades, others double. Willow, Colorado, painted blades. You name it, Lawyer had it covered.

“I had different ones for certain water clarities and temperatures,” he said.

For the first three days of competition, he rotated through three areas primarily. He mainly targeted the water around and behind docks, paying particular attention to the shade created by the walkways when the sun was out.

“The docks had to have deep water under them and had to have a ledge behind them so those fish could slide up there and spawn,” he said.

He also noticed fish were pulling up on the banks that were getting the most sun exposure. If there were dock walkways nearby, all the better.

He also had specific docks that he’s fished before that he revisited because they had brush piles around them.

“I had all of my weight by noon and never culled,” he said. “I caught the same amount of fish as day 1, but they were all just bigger.”

After catching all of fish on Thursday and Friday on a double Colorado configuration, he opted to switch to willow blades on day 3 as he sensed the fish may have been getting accustomed to the Colorado blade effect.

“Everybody was throwing Colorado blades so much the first few days, I think they got used to the vibration,” he said. “That willow just makes a different sound.”

He got shut out in the morning and didn’t catch a keeper until after 1 o’clock. Once he figured out what they were sitting on, he ran from dock to dock and caught a limit in the matter of 45 minutes. His 17-09 limit jumped him up to second behind Bryan Thrift, who seemed destined to win. Lawyer trailed him by 3-03 entering day 4.

“I’d have rather been in front of Bryan than behind him,” he said.

With the sun out and wind finally slacked off, the final day offered up yet another set of conditions. Lawyer had a productive morning, a contrast to the previous day, and it had him thinking a big day was in store. He had just five bites, all before 11 a.m., and they all wound up in his livewell. He never culled.

“I figured I’d light them up after Saturday, but it never transpired,” he said, adding that he did very little running around after narrowing down his locations from the first three days.

When he came in with 13-14, he figured he’d fall short of overtaking Thrift.

> Day 1: 3/4-oz. Freedom Tackle double Colorado spinnerbait. The spinnerbait comes as a double willow model, but Lawyer replaced them with size 3.5 (red) and size 6 (gold) Colorado blades made by Hildebrandt. He attached a 5/0 Gamakatsu flipping hook to the Freedom head. He also removed the stock skirt and slid on a Hildebrandt collared skirt in coleslaw, which is a mix of chartreuse, white and orange.

“The wire on that spinnerbait is great because it’s really bendable, which gives it a great vibration,” he said.

> Day 2: 3/4-oz. Freedom Tackle spinnerbait, same hook, same skirt, size 5 Colorado blade (gold). He liked the single-blade configuration as it allowed the bait to fall a little more and took away some of the resistance. “Even though it was raining, I had to slow it down and bump it off the bottom and whatever else was around like pipes,” he said.

> Day 4: 1-oz. homemade double willow spinnerbait (chartreuse/white), same skirt. The skirt comes with a longer tail section, which allows anglers to customize it to their liking. Lawyer removed some orange strands for this model as he felt like the fish were starting to veer away from orange/red patterns. “I figured they’d been getting off the red and orange because the water was clearing and they’d seen it so much,” he added.

> He used trailer hooks on all his spinnerbaits.