Marty Time! Robinson Surges To Top Of Group B 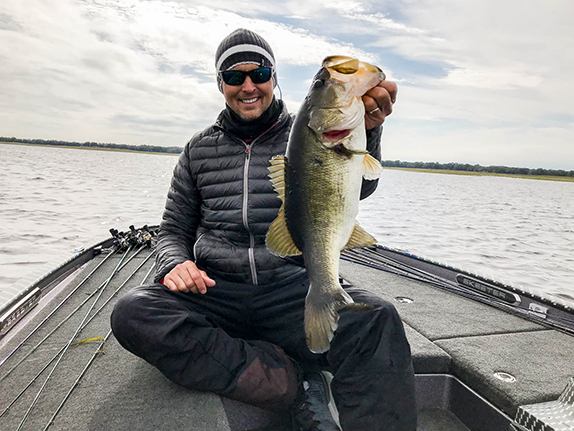 Marty Robinson caught this 4-06 brute during his furious third-period rally.

After five hours’ worth of fishing time today, Marty Robinson had one bass to his credit. It weighed 2 pounds, 3 ounces. He was nearly 38 1/2 pounds behind leader Anthony Gagliardi. The only names below Robinson’s after two periods were anglers who hadn’t caught a bass yet.

He was, essentially, a non-factor.

What occurred over the final 2 1/2 hours of competition, however, illustrates why, under the every-fish-counts format utilized by Major League Fishing, no competitor is ever truly out of contention. Robinson, the former Elite Series angler who still runs his own plumbing business in South Carolina, turned in an electrifying third period, catching 33 bass totaling 53-13 to rocket up the leaderboard and seize the Group B lead after day 2 of the Shotgun Round at the Kissimmee Chain of Lakes Bass Pro Tour.

His 34 fish were 14 more than any other competitor and his 56-00 total gives him a lead of 14-02 entering Friday’s Elimination Round. When told how far back he was and how big of a cushion he now enjoys, Robinson almost didn’t believe it.

“It seemed unimaginable for me at the time,” said Robinson, known to BassFans and fellow anglers as Marty the Party. “That’s the greatest thing about MLF – you never know, and you never can quit.”

Robinson’s stirring finish overshadowed the fast start turned in by fellow South Carolinian Anthony Gagliardi, the longtime FLW Tour pro who was one of the last additions to the Bass Pro Tour field.

Despite overcast skies and a stiff morning breeze that kept air temperatures in the 50s and water temperatures hovering around 60, Gagliardi worked an offshore area to the tune of 40 pounds by 11:30 a.m. and had an 11-pound lead on the field after two periods. He had a first-period barrage highlighted by a 27-minute stretch during which he caught 10 bass to gain some early momentum. He finished with 20 fish for 41-14, good for 2nd.

Gagliardi said the lack of sun played right into his hands.

“It didn’t hurt me,” he said. “I didn’t think it would, at least for what I was hoping to be able to have work in those conditions. It just worked out. I found what I was looking for and got on them early.”

Alton Jones did the bulk of his damage in the second and third periods to move into 5th with 17 fish for 30-01.

Group B will conclude the first portion of the competition on Friday with the Elimination Round, where the top 20 anglers will advance based on their cumulative two-day weight. Gerald Swindle currently sits in 20th after catching 18-04 today.

Kevin VanDam (26th) and Skeet Reese (32nd) are among those with ground to make up Friday if they hope to advance to Saturday’s Knockout Round.

Robinson came into today feeling as though he hadn’t really learned anything from the two days of practice.

“We had nasty weather both days with the rain and north winds,” he said. “It was just terrible for locating fish. I didn’t feel like I’d been efficient or covered a lot of water.”

He opted to start where he’d gotten a couple of bites, but if that didn’t pan out, he’d shift back to practice mode. When the noon hour and rolled around and he still had only caught one fish, he started to second-guess his choices.

“I was thinking I should’ve just gotten up in the junk and gone flipping instead of looking for a big school,” he said. “I was definitely starting to question my decisions.”

With the third period under way, Robinson began working down a stretch of offshore grass and missed a bite. He went another 15 feet and caught a 1-03 at 1:32 p.m. That touched off a furious sequence over the next two hours that saw him reel in a scorable bass, on average, every 3 1/2 minutes until the end of the day.

“We finally ran into them,” he said. “There’s just a good school of fish in there. When you look offshore like that, it can bite you, but if you find them it’s worth it.”

He didn’t tangle with any kicker-quality fish – his biggest of the day was 4-06 – but he made up for it with numbers. Before long, any notion of going to flip was long gone.

“It was fun,” he said. “There’s been a cold front and no sun and I just don’t feel like there are many fish up shallow right now in that 2- to 3-foot range. And if they are, they won’t want to bite too good. I like covering more water in Florida. The area I had is 4 to 6 feet and it’s the deepest available cover the fish had in that area. That’s what they want to go during these conditions.” 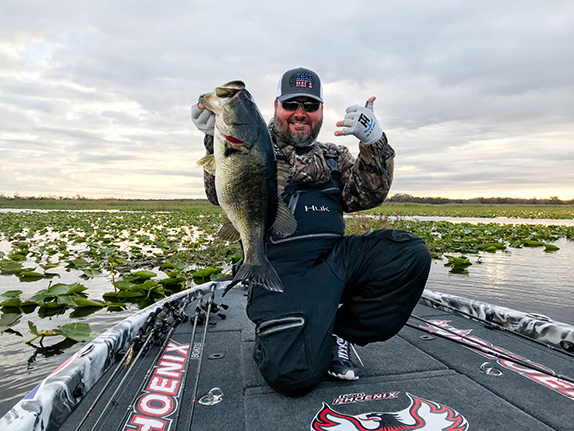 
Greg Hackney punctuated his strong first period with this 6-06 kicker.

Having not fished under the MLF format before, Gagliardi wasn’t sure what to expect, but after the strong start, he can’t wait until Friday.

“It was awesome. Granted, a lot has to do with the fact that I caught ‘em well. I was thinking about it after I was out there. I had 14 or 15 fish and I was thinking about what my best five would be and then what would happen if I catch a 2-even or four of them and they don’t help you. That’s frustrating, but now, every time you catch one it adds fuel to the fire. It keeps you focused. I don’t think as much or crunch numbers as much about what I need. I’m not worrying about what I need to catch. I can just fish and focus on that.”

While the majority of his catches came offshore, he did spend time poking around some grass and other emergent vegetation, but had no luck doing so. Ultimately, he thinks if the weather warms up, he might have to switch gears.

“I honestly don’t know,” he said. “I could do (the offshore thing) for two more days and not get a bite. Eventually, at some point, the grass bite (could improve). With a break in the weather that’s going to trump offshore. The numbers are in your favor out there, but the guys in the grass catch numbers, too, with 4s and 5s mixed in and that can make up a lot of ground.

“If it stays cold and windy, that gives the offshore bite more of a chance. If the nicer weather comes through, it might turn into something different.”

For as slow as he had to fish today, Powroznik generated plenty of bites, but that’s because he finally had a willingness to adapt to the conditions.

“I’ve been coming to Florida for 16 years for fishing tournaments and I’ve got my butt whipped because I don’t pull out a flipping stick when it gets cold,” he said. “This afternoon, I caught a couple on a Rat-L-Trap, but come Friday, when it’s time to advance to the next round, I’ll have three Quantum rods on my deck and they’ll all be 7-foot-11 flipping sticks with HI-SEAS braid on them.”

That simple approach allowed him to tally up 12 fish for 22 pounds in the second period alone.

“I went to a place and pulled in and got two bites on two flips,” he said. “I caught all of my weight there, but come the third period, I pulled out and fished around because I didn’t want anybody to see me there.”

Despite a deficit of nearly 24 pounds, Hackney is right where he wants to be – on the map and on the leaderboard.

“I love Florida and it’s always been for my entire career my favorite place to start the season,” he said. “Florida just has that lore about it going back to the Roland Martin days with all the giant bass and better weather than most places most of the time.”

Knowing the conditions weren’t ideal, he was left with an either-or proposition.

“I felt like, overall, fishing wasn’t going to be really good and as long as the weather stayed like this, you could fish for quality or quantity,” he said. “I’m stuck between the two. I can’t commit to either one because I can’t get enough bites doing either. I can’t catch enough little ones or big ones if that makes any sense. I’m having to catch them both.”

He was surprised by how well the fish bit during the first period amid the cold. He caught a day-best 6-06 and a 4-10 during that time span.

“Other than the middle part of the day, it was kind of steady,” he added. “It was standard Florida post-cold front fishing. They’re on the same stuff they were on 20 years ago. There’s a lot of that stuff, but you have to be in the right area. It’s typical for a January or February deal. Believe me, there are no new wheels being invented.”