BACK
'It's A Lot Different'

First-Timers' Results Mixed, But They Had Fun 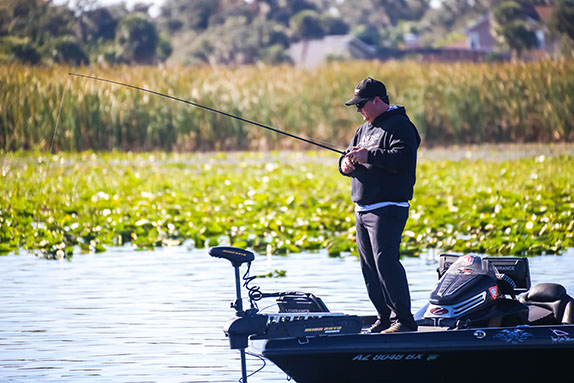 Roy Hawk incurred the first penalty on the MLF Bass Pro Tour when a 2-pound fish he swung into his boat hit him in the chest.

Andy Morgan wasn't in his customary position near the top of the leaderboard after his first day as a Major League Fishing angler, but the longtime FLW Tour stalwart had a great time competing under the catch-all-you-can MLF format at the inaugural Bass Pro Tour event.

"It was pretty bad a--; I really enjoyed it," said the three-time FLW Angler of the Year. "It lights a fire under you the whole time and it's wide-open all the way. It's really neat how it all goes down.

"It's a lot different than what I'm used to. You fish more by the seat of your pants and that ScoreTracker (which allows competitors to see where they are in the standings throughout the day) can make you move around some, too."

He caught eight fish in the opening round at Florida's Kissimmee Chain, but none weighed more than a pound and a half. He's in 27th place out of the 40 pros (half the field) who were on the water on day 1 and will need to move up seven places on Thursday to advance to the next round.

With 9-14, he's a little more than 3 pounds behind 20th-place Stephen Browning.

"I didn't make any big adjustments to what I was doing, but I should have," he said. "I fished open water in (Lake) Toho a lot of the time, although I did flip some this afternoon. I should've done better than I did, but it just didn't work out.

"Nobody really caught much other than four or five guys. I wish I knew (Lake) Kissimmee better than I do because I've got a feeling that's where a lot of the fish were caught today. I wish I knew some hidey-hole stuff there."

First-time MLF competitor Roy Hawk had the distinction of receiving the first time-out penalty on the BPT. He caught a 2-pounder on a finesse worm at 7:47 a.m., just 17 minutes after the lines-in call, and the fish bumped his chest as he swung it aboard, causing him to lay down his rod for 2 minutes.

He threw a Duo Realis rattlebait in Toho for most of the day. He caught one fish on a Yamamoto Swim Senko.

"I had a lot of fun. I'm a huge fan of the sport and I loved getting all the updates and seeing how my buddies were doing. If I wasn't fishing, I'd be watching (the live-streamed coverage) all day."

Mark Daniels Jr. had a solid start to his MLF career, catching eight fish for 20-13 and landing in 11th place.

"It was interesting and it was certainly different," he said. "Hearing those updates (from the in-boat official) every 15 minutes can be nerve-wracking, especially if you're not catching them."

He caught all of his fish in the first two of the day's three 90-minute periods. All of them were enticed by his new signature series MR6 crankbait.

"I'm going to watch the weather closely for the next day or so and see if I can figure things out a little better for Thursday."

James Elam managed just three fish, all 1-pounders caught in the third period, and is mired in 37th place. Still, he had a good time in his first day as an MLF pro.

"I loved it," he said. "I really enjoyed the two breaks during the day – you could eat lunch, regroup and take some clothes off as it got warmer. I just need to be more efficient when I go back to it (on Thursday).

"I didn't think I was really going to like the (ScoreTracker), but I did. It let you know if fishing was tough all-around or just on you."

He'll utilize his off day to regroup and figure out a game plan for his second crack at the Kissimmee system.

"I didn't have a good practice at all and I haven't been here before, so I don't know much about it. I just didn't find enough fish. I had one area, but the cold night (negatively) affected it.

"I definitely need to do something different, but nothing pops into my mind right now as to what. I have to change up somehow."