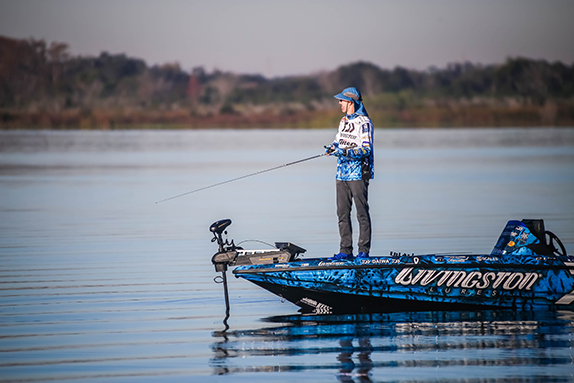 Randy Howell did most of his damage today in the same general area.

The day started with Bass Pro Shops founder Johnny Morris making a ceremonial first cast off the front deck of Kevin VanDam’s boat with a textbook Florida sunrise in the distance at Big Toho Marina. Moments later, the first group of 40 competitors in the inaugural MLF Bass Pro Tour were turned loose across the fertile Kissimmee Chain of Lakes to kick off a new era in professional tournament fishing.

The day concluded with a seasoned veteran atop the leaderboard – and by a healthy margin.

Randy Howell caught 26 fish for 49-12 to set an impressive benchmark for others to chase. He was the only competitor to catch at least 20 fish (no one else had more than 17). Howell, a veteran of several MLF Selects and four MLF Cups, did the bulk of his damage in open water in the afternoon. His 15 fish for 29-09 in the third period alone exceeded his output in the first and second periods combined.

“It’s really special,” Howell said. “I was already very excited about being in the event and you always have aspirations of doing well, but to have the first day go this well and have it written that I was the leader after the first day is something I’m proud of. It’ll be even better to lead it after Sunday. I feel very blessed and I’m thankful for it.”

Howell is nearly 9 pounds ahead of 2nd-place Ish Monroe, who carded 15 fish for 40-13, which included seven catches of 3 pounds or better.

Eleven of the 40 anglers cracked the 20-pound mark on a day where conditions improved dramatically compared to the two-day practice session. Water temperatures rose from the mid 50s into the low 60s, which would explain why the third period saw the most fish and weight caught.

Stephen Browning currently occupies 20th place with 13-00, but there are nine other competitors within four pounds of him entering Thursday’s elimination portion of the first round.

For the history buffs out there, here are a few of the Bass Pro Tour firsts recorded today around the Kissimmee Chain:

The second group of 40 competitors will get their shot at the Kissimmee Chain on Wednesday while those who competed today get a day off. Group A will return to the water on Thursday as the group faces its first cut day. The top 20 after Thursday move on to compete on Saturday in the Knockout Round against the Top 20 finishers from Group B.

While those near the top of the standings enjoyed productive days, a number of accomplished anglers struggled during their maiden Bass Pro Tour outings. Justin Lucas, last year’s Elite Series Angler of the Year, caught a single fish in the first period for 1-06 and didn’t record another keeper the rest of the day. Andy Montgomery, who has excelled in the MLF format, went 0-for during periods 1 and 2 before connecting with a 1-14 fish late in the day to put him in 39th. Nine other anglers failed to tally five bass.

The only letdown for Howell today was not eclipsing the 50-pound mark, a feat that’s been accomplished 15 times in past MLF Cup events.

He said the key to his third-period barrage was adjusting to the conditions and staying in the same general area for the whole day. His knowledge of the area dates back to the 2000 Bassmaster Florida Top 150 in which he finished 38th and cashed a check for $2,800 despite battling an illness that left him severely dehydrated and forced him to spend a night in the hospital after the tournament. He said after a rough day of practice Sunday and a tough start Monday, he resorted to the area in Lake Toho that he recalled from nearly 20 years ago.

“It’s got seven or eight shell beds that all have schools of mixed-size fish on them,” he said. “There are some bigger ones mixed in. As the wind would change, they’d roam around and come up and chase bait.”

He alternated between a jerkbait and lipless crankbait most of the day. 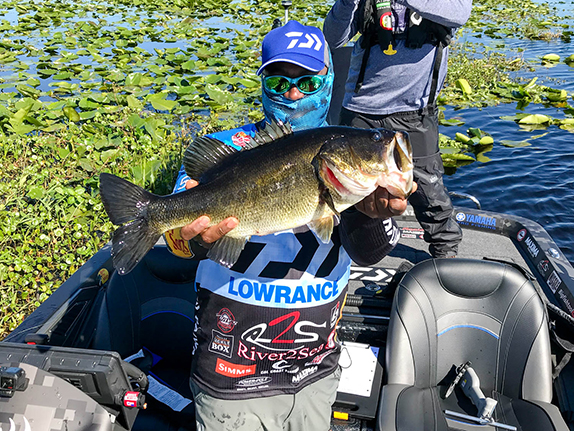 
Ish Monroe tangled with several fish this size on the opening day at the Kissimmee Chain.

“It was surprising to see how many fish were out there,” he noted. “When I went there yesterday, I caught three off of two different spots so I knew I had somewhere to start.”

He caught seven in the first period and four in the second before turning it on toward the end of the day.

“It was cool to learn more and more about it,” he added. “I marked a bunch of stuff that I hope to come back to. It’s a good area. I hope it’ll hold up.”

Having Wednesday off, Howell said, will give him a chance to recharge after such an intense opening day.

“I’m pretty hyped up right now,” he said. “It was so intense all day and I felt like I was jacked up on adrenaline because you can never slow down and relax even to take a drink. I’m definitely glad we have tomorrow off. Maybe I’ll sleep in until like 7 a.m.”

Monroe also settled into a comfort zone as the day progressed. He paired a spinnerbait pattern with a mat-punching strategy that seemed to get better as the sun got higher in the sky.

“It was an excellent day,” he said. “I had a nice little area with a lot of fish and just hammered on it. I just wish I’d have caught everything that bit because it would show people this is not a 1-pounder deal. I had seven over 3 (pounds) so it shows you can catch big ones.”

As the only other angler to crack the 40-mark, he knows he has a cushion to work with when he gets back on the water Thursday.

“I plan to go practice Thursday and that’s the great part about ScoreTracker because I’ll know what’s going on,” he said. “If guys start wailing on ‘em or if all of a sudden the cut line is 25 (pounds) and it’s early, then I’ll go hammer on my fish. If it’s still around 20, then I can try other things.”

Monroe caught progressively more fish and more weight through the three periods, but also lost a few that would’ve drawn him closer to Howell.

“In those mats, you have to hit them hard and sometimes you miss them,” he said. 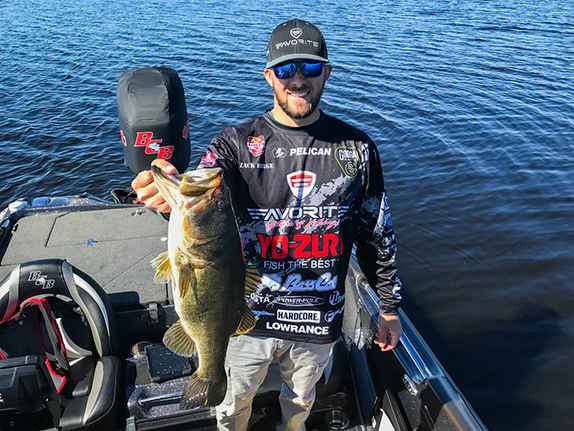 
This 6-12 kicker was one of three fish Zack Birge caught today that weighed 4 pounds or more.

Like Howell, Birge had his most productive stretch later in the day and he credits the sunny conditions. His nine fish in the third period exceeded the six he caught across periods 1 and 2 and his 20-08 in the third was one of just three 20-pound periods on the day. Randall Tharp, with 23 pounds in period 2, had the other.

“I’m pleased with it,” Birge said. “It started slow, but I stayed in a general area with a good population of fish in it. I changed up mid-day and got few more bites. Then I caught that first big one and kept plugging away.”

“That big one came from an area where I caught my first three in the first period, so I decided to milk it and then expand in the third period,” he added. “I’m in an area where I feel the big ones are coming to. I’m not on reeds or on the bank where they’re going. It’s kind of a middle spot and there’s a 100-yard stretch with a lot of fish on it.”

After notching just one bass for 1-07 in the first period, Tharp scrapped his game plan and moved into his comfort zone, picking apart vegetation with a flipping stick. It paid off as he amassed 27-04 over the final two periods and held the lead entering the final stanza. He’s 7th with 28-11 on nine fish, the fewest among the top 10.

“I pulled the plug really early this morning on what I was doing and went on a hunch, really based on a few bites I had late in practice,” he said. “That’s something I’ve gotten better at through my career – an hour into today, it was the best thing I had and I said, ‘I am done with this.’”

From there, he simplified his approach and started to build some momentum.

“I just need two rods for the rest of the deal,” he said. “I’m committed to what I’m doing. I only saw two or three boats running around, but nobody fished what I would call the juice. I fished the way I like to fish. I’m not going to change what I do because of the format because in the end, I think the guy who catches the biggest fish will win.”

Today was Tharp’s first taste of the MLF format and he said he loved knowing where he stood on the leaderboard throughout the day.

“It is intense, though, knowing where you stand all the time,” he said. “When I was in 25th early on I wanted to know who was behind me and ahead of me. Then it seemed like toward the middle of the day, everybody was catching fish so it felt good to be leading after the second period. It’s interesting. I think it’s going to bring out the best in us. It was just extra motivation and I was on edge all day knowing where I stood.”

He was thankful to be in Group A and have the conditions he had today because he suspects it could be the last good day of the week.

“The fishing isn’t real good and I don’t think it’ll get better, so I’m right where I want to be,” he added.

DeFoe’s weight increased each period and he caught his biggest fish – a 4 1/2-pounder – in the third period to cap off a strong day.

“I’m very pleased with my start and I think as an organization it got off to a good start,” he said. “For this being our first try and for as smooth as it went, I’m happy with it.”

Coming off practice, DeFoe tried to get into the mindset of needing to land a scorable bass every 15 minutes, even if it meant a slew of smaller fish.

“I figured by the end of the day, that would go a long way,” he said. “I didn’t have quite that average, but the size was better than I thought.”

Indeed, he was one of 14 anglers with a 2-pound average or better.

“I would like to say it was by design and there are still plenty of fish left where I’m fishing, but I hit it hard to get what I got,” he said. “It was all about getting in an area and applying the standard MLF fishing strategy of catching every one that is there.”

He’s not yet formulated his plan for Thursday but looking at the weather forecast for the next couple of nights, he doesn’t foresee the conditions improving, so he feels like his place in the next round is secure.