BACK
Made Four Checks 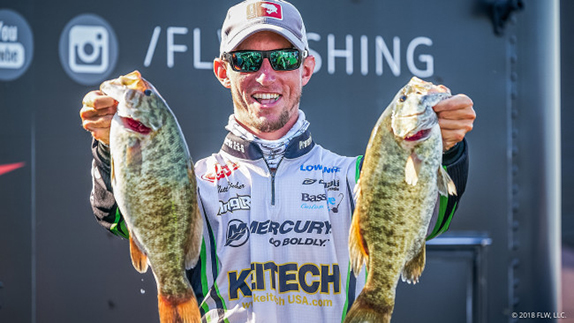 Matt Becker bounced back from a triple-digit finish at Kentucky Lake with a top-30 showing at Lake St. Clair to capture FLW Tour Rookie of the Year honors.

The FLW Tour season finale had all the makings of a pressure-cooker for Matt Becker.

He entered the tournament at Lake St. Clair 39th in Angler of the Year points, putting him just inside the projected cut to make the Forrest Wood Cup. Being on the Cup bubble is always a precarious spot, even for seasoned veterans of the sport, let alone a 20-something looking to finish his rookie year on a high note.

In addition, Becker was coming off a 102nd-place finish at Kentucky Lake – “The was the only one where I wasn’t on much. I felt lost there,” he said – but there was a comfort level heading to one of the best smallmouth lakes in the land.

A native of southwestern Pennsylvania, Becker has spent plenty of time on the big waters of Lake Erie, so he was comfortable knowing what to expect, but there was still work to be done.

He managed to do way more than punch his ticket to Lake Ouachita. The 26-year-old from suburban Pittsburgh capped off an admittedly up-and-down rookie year with a 26th-place finish, his third top-30 cut of the season, and left Michigan with a guaranteed Cup berth, as well as the FLW Tour Rookie of the Year award.

The latter was hardly on his mind entering the finale, he said.

“I was pretty relaxed, but I went into it focused on qualifying for the Cup,” Becker said. “Honestly, I was not even thinking about Rookie of the Year. I practiced to make the Cup.”

That meant taking a more conservative approach than normal. Rather than making long runs to Erie to target fish holding on offshore structure, he remained in St. Clair and averaged nearly 19 pounds per day to earn his fourth five-figure paycheck of the season.

“I still don’t like how St. Clair fishes,” he added. “I like fishing structure and knowing there’s a reason why they’re there. St. Clair is still random to me. Practice was alright. I found a couple groups and figured it wouldn’t be a problem to catch 18 to 20 pounds.”

Becker registered his best weight of the event on day 1 with 20-08, but it took him a while to locate the fish following the off day.

“The wind was blowing pretty good and I figured I’d catch them quick on a crankbait,” he said. “I did catch them, but they were small. I grinded through and caught some bigger ones and once it slicked off in the afternoon, I went to a dropshot and caught them.”

It wasn’t until that night that he glanced at the Rookie of the Year standings and started to do the math to see where he stood. He came into the tournament 2nd in the rookie race, but was 73 points behind Sheldon Collings. That’s a steep hill to climb in one tournament, but Collings was buried in 127th after day 1 while Becker found himself in the top 30.

“I noticed Sheldon had a decent day but was in the 120s,” Becker said. “That’s when it hit me that if I catch them again and he struggles again, I could win Rookie of the Year. It was first time I’d even considered it since leaving Kentucky Lake.”

With a Cup berth and top rookie honors on the line on day 2, Becker delivered a 19-11 stringer to clinch a top-30 finish. Meanwhile, Collings stumbled and finished 170th, giving Becker the ROY award.

“Going into day 2, I had a better idea of where they were at,” he said.

With his main goal accomplished and the Rookie of the Year trophy locked up, Becker said day 3 at St. Clair was all about enjoying his time on the water.

“It was the most relaxed I’d been all year because I got everything I wanted on Friday,” he said. “I was so far back from winning, I just went out and had fun.”

While there is no financial windfall that goes with winning Rookie of the Year, Becker hopes it’s a sign of things to come.

“It’s always good to have a trophy,” he said. “When you look back at past winners, it seems to be a good indicator of a stout career, so I hope to follow in their footsteps.”

Series of Ups and Downs

Becker, who won the 1000 Islands Northern FLW Series last year, got a taste of the highs and lows of fishing at the Tour level this season.

“I wasn’t real sure what to expect,” he said. “I put a lot of work in as far as pre-practice and research. I don’t know why I couldn’t string two good ones in a row or two bad ones in a row for that matter.”

Indeed, it was a series of peaks and valleys with four top-40 finishes, including an 8th at Smith Lake, intertwined with three duds, two of which were triple-digit bombs (Lake Cumberland and Kentucky Lake).

Through it all, though, he feels like he’s improved in just about every area.

“Looking back a year ago, it’s not even close. I feel like a whole different fisherman,” he said. “A year ago, I was getting ready for my second Costa Series event. I had no idea I’d be fishing the Tour.”

As far as the biggest takeaway, he says it was not being stubborn.

“I learned that you have to adjust quick and have to be willing to scrap practice and fish the conditions during a tournament,” he said. “That probably was a strength of mine. Growing up fishing the Three Rivers, that’s what you have to do. At Cumberland, I got dialed in on one thing and didn’t adjust and wound up 156th.

> Becker spent a few days at Ouachita recently and expects the fishing to be tough come mid-August. “It’s definitely different,” he said. “It’s nothing like a northern fishery, but it’s definitely full of fish. A lot of times, my graph was loaded with fish or bait, but it’s a tough time of year. It’s tough fishing with water temps getting into the low 90s. Somebody is going to win $300,000, though.”