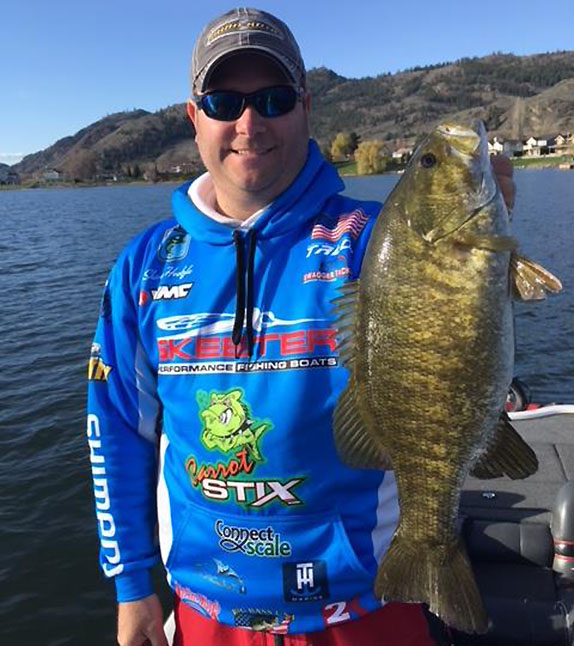 Shane Hoelzle and partner Jestin Brown caught three smallmouths that weighed in excess of 7 pounds at a recent event at Lake Osoyoos in British Columbia.

Back to the east a bit.

The two anglers from the state of Washington teamed up to set what they believe are new unofficial Canadian tournament records for one- and two-day catches, sacking 33-02 on day 1 and 31-04 on day 2.

If you’re thinking Simcoe, think again. It couldn’t have been on that well-known water, where Jason Clay and Matt Belzil broke the Canadian record for a five-fish limit last fall in the Lake Simcoe Open, because Simcoe can’t be legally fished for another two months.

Hoetzle has a long and productive history on Osoyoos. Last year on the first day of the same event, he boated a 30-13 bag and he said that in an annual May event they usually have at least seven bags over 20 pounds, with several over 25. His personal best in that event was 28-11. Nevertheless, he didn’t know what to expect this year, because an unusually long winter led to a late ice-out and water temperatures where he intended to fish on the main lake were in the low 40s.

He came very close to not getting there at all, because upon returning from his night shift at a local hospital, he and Brown hooked up his Skeeter, threw their gear in the truck, and headed out “like two kids in a candy store without adult supervision.” Unfortunately, at the first stoplight, just a few minutes down the road, they got rear-ended.

“I had my prop through (the other vehicle's) front bumper. I was like a bull seeing red but he jumped out and said he was sorry. He was an all right guy, just not paying attention.”

The boat appeared to perhaps be totaled – although he’d find out after the fact that it could be fixed – and it certainly was in no shape to fish. Hoelzle called his ABA team partner Shawn Smith, who had bought a new Ranger but had yet to sell his old one, and Smith offered to loan him the spare boat. It took several hours of driving to get there, but that gave Smith time to get started on reinstalling a trolling motor and batteries. A few more hours of driving and they were at the lake in time to pre-fish.

Practice wasn’t much better. The pair spent 11 hours on the water and caught a single 13-inch bass.

It All Came Together

With little to go on, Hoelzle and Brown headed south to a weedline where Hoelzle recalled catching a 9-04 while pre-fishing last spring. The area has current and “a ditch about the size of a living room.” They call it the “hawg highway,” and it comes up into about 6 feet from a 10-foot trough.

“We didn’t move the boat more than 100 feet the whole tournament,” Hoelzle said. They didn’t need to. The fish were stacked in that ditch, and as Brown went to net Hoelzle’s first-cast 6-pounder, his “rod started dancing down the deck,” Hoelzle explained. “He jumped on it like he was recovering a fumble.” 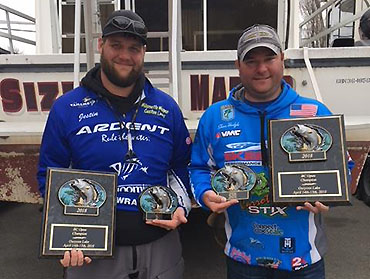 The two-day weight amassed by Hoelzle and Brown topped those of the 2nd-, 3rd- and 4th-place finishers combined.

The boater’s fish got off, but Brown’s solid 5-15 made it into the boat. That early start gave them the confidence to slow down and drag football heads and Hula Grubs across the rocks that abutted the weeds.

Brown, a 30-year-old power plant employee who said he’s only been fishing seriously for four years, said that the smaller fish wanted the lure dragged and then stopped, while the bigger ones “wanted a slow drag all the way through.”

“You had to go painfully slow, feeling each rock,” Hoelzle added. “Sometimes they’d hit it so hard that they’d knock slack in your line. Other times it just felt like you had a weed on your jig.”

The wind kicked up around 1 p.m., and with no Spot Lock or Power-Poles to hold them in place, Hoelzle had to focus on running the boat, leaving Brown to be the primary angler. He didn’t let the team down. He caught an 8-01 brute that had them both emitting screams “that would make Iaconelli proud.”

If they thought that was going to be the big fish of the day, they were pleasantly surprised 10 minutes later when Hoelzle “hooked into a tow truck” that pushed their handheld scale to 8-15. “It was pooping crayfish all over the deck,” he recalled, or else it might’ve topped 9.

When the pair returned to the ramp, they discovered that only seven of 13 teams had weighed any fish. Their 33-02 had them in the lead by over 18 pounds, and they figured that a 10-pound limit on day 2 would easily put it away.

The other teams who’d seen them on their spot respected their water, but the fishing didn’t start off strong. Hoelzle caught a 1 1/2-pounder in the first 40 minutes on a crankbait, and it took until 9:30 for Brown to add a 6-01. A half hour later Hoelzle caught a 6-09 and the race was on. Brown topped that with a 6-11, and then put the icing on the cake.

“What started off as a really crappy weekend turned into one of the best of our lives,” Brown said.

What Does it Mean?

Many lakes in the Pacific Northwest – including Coeur d’Alene, Dworshak, and Pend Oreille – have become known to serious brown-bass hunters as trophy factories. Similarly, the lakes of eastern Canada are renowned tournament destinations. Few serious bass anglers are paying attention to the lakes in western Canada, though. Osoyoos is one example, but there are others.

Hoelzle said that the province’s government doesn’t do the sport any favors, preferring trout, salmon and steelhead, and treating bass “like a red-headed stepchild.” He called his friend Shawn Smith “the Godfather of British Columbia bass fishing,” and noted Smith’s extensive work to get proper regulations in place.

Nevertheless, largely because it’s a long drive from any large population center, and because anglers have kept quiet, Osoyoos remains largely unpressured.

Hoelzle and Brown don’t think that the diehards will mind the publicity. “This will put B.C. bass fishing on the map,” Hoelzle said. “Everything in Canada revolves around Ontario. We have a younger sibling complex. But we get to fish all year, without a spring closure.”

Local restrictions preclude traditional tournament weigh-ins, so competitors had to weigh their fish on handheld scales and photograph them. That might cause some naysayers to dispute the actual weights of the fish, or the winning pair’s total, but there is little doubt that these relatively untapped lakes have incredible smallmouth potential. Hoelzle said he wouldn’t be surprised to see a 10-pound largemouth and a 10-pound smallmouth from Osoyoos.

> On only his second trip to Osoyoos, Brown broke his big fish “curse” on day 2. During a tournament last fall, he caught a 7 1/2-pound smallmouth that didn’t earn big-fish honors. When Hoelzle’s 8-15 topped his personal best 8-01 on day 1, he was shocked. Finally, on day 2 he leapfrogged his partner with a 7-01 to claim the daily crown.