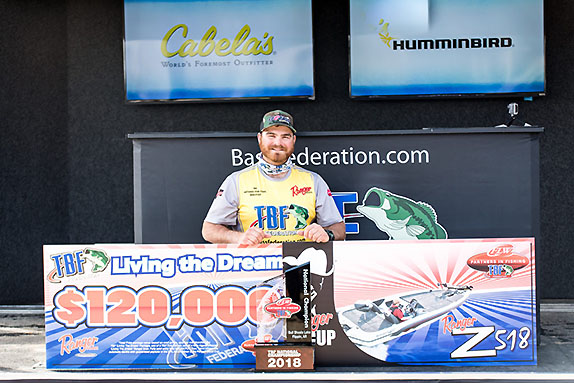 Austin Wilson had known since his mid-teen years a decade ago that he wanted to become a professional bass fisherman. In 2013, he watched fellow Northern Californian Mark Daniels Jr. launch a pro career by winning The Bass Federation (TBF) National Championship and figured that might be a good route for him to take, as well.

The 26-year-old achieved his goal this month by topping the field in the TBF final at Bull Shoals Lake in Arkansas. His three-day total of 40-04 eclipsed runner-up Pat Upthagrove of Michigan by a little over 3 pounds.

"This is a huge stepping stone for me," he said. "This is my shot to try to chase this crazy dream."

He'll receive paid entry fees for the 2019 FLW Tour, along with the use of a boat and truck and some expense money under the TBF's "Living the Deam" package. Nonetheless, he still hopes to hang onto his job at Sysco foods in Sacramento, where he works at 7 p.m. to 3:30 a.m. shift staging trucks and trailers on the loading docks.

"My supervisor said he'll work with me on that. Those guys (on the Tour) are so good and If I don't get checks, I'm still going to need some kind of income."

A Bit Out of His Element

Wilson's performance at Bull Shoals was extremely consistent – his bags weighed 14-02, 13-09 and 12-09. He started the final day tied for the lead with Kentucky's B.J. Nelson and prevailed when the latter managed just a three-fish bag that weighed less than 8 pounds.

More than half of Wilson's 15 weigh-in fish were enticed by a crankbait. Ironically, cranking is a tactic that he doesn't particularly enjoy, nor does he consider himself very proficient at it.

"I crank a little bit on Clear Lake and once in a while on the (California Delta), but it always seems like I lose a lot of fish even though I put new hooks on and everything like that," he said. "I don't have a whole lot of confidence in it, but it was the deal (at Bull Shoals) and I had to get used to it."

He said he'd been thinking about the championship event every day since he qualified last November via his finish in the semifinals at Lake Havasu. He used Google Earth to do a tremendous amount of study on Bull Shoals and made a pre-practice trip about a month before the tournament.

"That made me familiar with the lake so I knew how it actually laid out. Google Earth shows a lot, but when you get on the lake things look totally different. Areas that I thought would be good ended up not being good at all."

He sought out staging areas that held fish on their way to the spawning grounds during the three days of official practice. He determined that his primary focus would be secondary points that were relatively flat.

"I only had a handful of spots where I felt like I could catch fish. The fishing was pretty tough and my goal each day was just to get a limit."

Wilson supplemented his point-cranking program with a few fish suspended next to bridge pillars that he caught on an umbrella rig. In addition, he picked up two on the final day with a Ned rig on a submerged road bed.

He and Nelson caught identical bags on each of the first two days to move to the top of the field. He was actually relieved that the standings sheet showed him in 2nd place after day 2 – the result of ties being separated alphabetically.

"I wasn't as nervous as I would've been if they'd put me in 1st place – I didn't have all that pressure on me. I just tried not to think about it at all."

He didn't think his 12 1/2 pounds on day 3 would be enough to give him the win – he lost one good fish at the net early in the day and figured that would cost him.

"I thought I'd fall short because I just didn't fish clean."

> The fish he caught on the crankbait came from 8 to 10 feet of water. He used the "kneel and reel" technique to achieve greater depth and reeled as fast as he could.

Main factor in his success – "Just fishing and trying to make the right adjustments, like when I knew something had changed and I had to slow down in some way and I ended up catching those two on the road bed with the Ned Rig."

Performance edge – "Those Dobyns rods were really a big help."