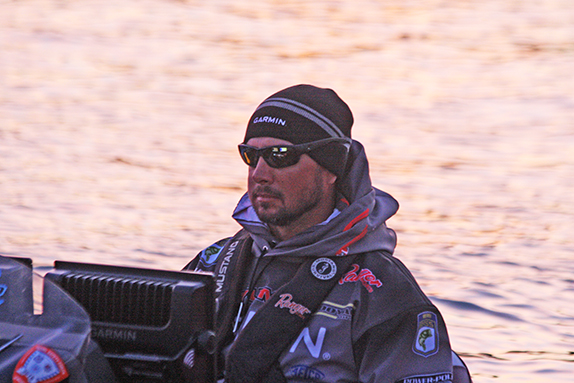 Jason Christie said he wouldn't have looked at BASSTrakk on the final day of the Classic at Hartwell.

During Elite Series events, fans are glued to a page on the Bassmaster website known as BASSTrakk.

It’s an unofficial live leaderboard that gets updated when in-boat marshals record an angler’s catch on a handheld device and send it off to cyberspace. It’s meant to give fans a rough idea of who’s catching them and who might be struggling.

Admittedly, it’s an inexact system, under which most anglers guesstimate the weight of each fish so the marshal has something to punch into the system. Some estimate high and some low-ball the weights. Others weigh each fish in the boat to be more precise.

There are some Elite Series events where not every angler has a marshal in the boat so it’s impossible to get accurate updates for the entire field. Bottom line, it’s a very unofficial system. But it still has value because it’s information. At the Bassmaster Classic, BASSTrakk is what fans have to go by to track anglers who don’t have a live camera feed originating from their boats.

At the Classic, each competitor has a marshal with him so it’s assumed BASSTrakk is providing a somewhat accurate portrayal of what’s actually in each competitor’s livewell, provided cell service is good enough.

Currently, the only event where a live leaderboard is used to inform competitors of where they stand is the Classic Bracket, which is a one-on-one format, under which each fish is weighed by an in-boat official. BASSTrakk is used as the official leaderboard at Toyota Texas Fest, where fish are caught, weighed and immediately released, but anglers aren’t given on-the-water updates.

This year, the way the final day played out, the Classic was up for grabs all day long. Day-2 leader Jason Christie was without a fish until after noon, but those chasing him had no idea.

What if competitors had access to BASSTrakk or could ask their marshal for an update, say, once an hour? Would it have impacted decisions they made on the final day at Lake Hartwell?

Angler access to BASSTrakk during competition has been experimented with in the past, but is currently not allowed (the Elite Series field voted against its use). That hasn’t stopped fans from constantly hitting refresh on their web browser, waiting for the next catches to upload.

BassFans will recall during the final day of the 2016 Classic at Grand Lake, competitors were allowed to look at BASSTrakk if they so desired. Christie, the leader after day 2, was vocal about not wanting to know what was going on, adding during the TV broadcast, “If I were look right now and see so-and-so had 20 pounds, it would freak me out. I’m not a fan of BASSTrakk.”

Partway through the day, a man on shore yelled out to Christie that Edwin Evers had caught 25 pounds already – he likely learned that by monitoring BASSTrakk – which meant Christie was no longer in the lead, by a good amount.

A flustered Christie then debated with himself whether to look at the website to confirm the man’s claim. After seeing it for himself, he was left with little time to make significant adjustments. Ultimately, Evers caught a whopping 29-03, dwarfing Christie’s 12-09, to capture the Classic win. 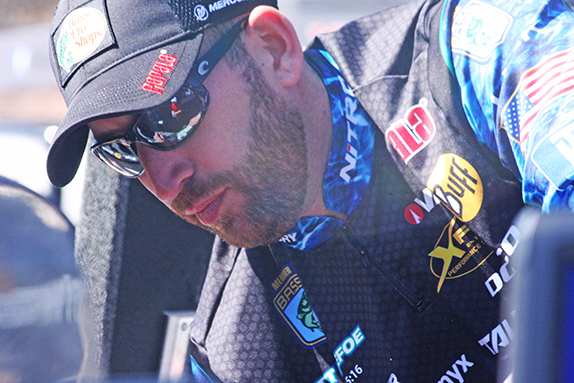 
Ott DeFoe doesn't think looking at BASSTrakk would've altered any of the decisions he made on day 3 at Hartwell.

At this year’s Classic, competitors were not allowed to view the BASSTrakk leaderboard while on the water, but some who were in contention on the final day at Hartwell said they would’ve used it as a resource to help them make on-the-water decisions.

Jordan Lee, who rallied from 6th place to win his second straight Classic, said he would’ve been a nervous wreck had he glanced at it and saw he’d erased the 6 1/2-pound deficit he faced after day 2.

“I would’ve freak out,” Lee said. “I think If I saw I was leading I would have fished faster.”

At the press conference for finishers 2 through 6 at the recent Classic, the competitors were asked if they would have utilized BASSTrakk had it been available to them on the final day. What follows is a collection of their responses:

Brent Ehrler – 2nd place
“One hundred percent. I wasted probably four hours (Saturday) fishing for largemouth and I wasted probably three hours today fishing for largemouth. I had 12 pounds early by 9 o’clock both days. On Saturday, I had it by about 8:30 and fished for largemouth for about four hours and never caught anything. Today, I did the same thing. I went and fished shallow trying to get a key bite. It was my fault, but it was also Jason’s fault, too, for having such a lead over us. It forced us to fish differently out there. I went back out and started fishing deep to cull up to what I caught.”

Jason Christie – 3rd place
“I would not have looked at BASSTrakk. I’d like to have the day to do over again. I think everybody sitting up here obviously would, but it’s just one of those things where if I’d looked at it, I would’ve pressed even more. I honestly thought I needed 13 or 14 (pounds) to have a chance and I went and did what I thought I needed to do to catch that. If I’d have went and caught 12, somebody would’ve caught 17 or 18.”

Matt Lee – 4th place
“I agree with Christie. I wouldn’t have looked at it. I think if everybody looks at it, it changes the dynamic. On day 2, I went shallow and wasted four hours. I don’t know. I can see both sides. I guess I don’t know if I would’ve looked at it or not. It’s easy for me to say that now, but today when Robbie Floyd shows up and I’m in 18th place and I hadn’t caught them that good, I might’ve peeked.”

Jacob Powroznik – 5th place
“I would’ve looked at it. I don’t think I would’ve changed anything that I was doing, but it might’ve made me slow down and fish more thoroughly. I’d love to look at it because then I could’ve run laps around Christie or Ehrler out there in the middle if I was leading.”

Ott DeFoe – 6th place
“I’m not going to say I wouldn’t have looked at it, but it wouldn’t have changed anything that I did because I was far enough back, I knew enough that somebody would catch them that I was doing what I had to do and I was still 5 pounds out. Had I been a pound or two pounds out, I would’ve wanted to know. I was seven out to start the day and without a bunch of 7-pounders in the lake, you’re not going to be that close. I felt like I was doing what I needed to do to catch 18, which would’ve been my only chance.”