Similarities To Home Have McClelland Hopeful 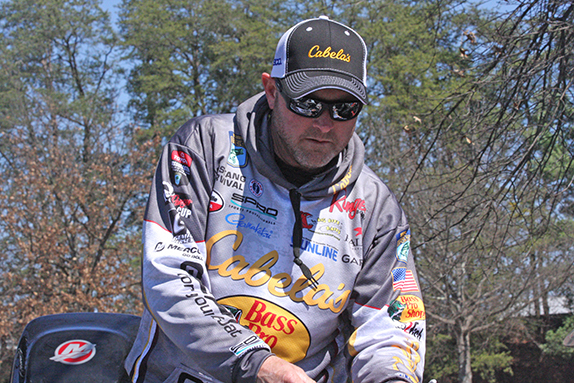 Mike McClelland has a good feeling about how Lake Hartwell is setting up this week.


If it seemed to writers and TV types like there was an extra spring in the steps of Mike McClelland leading up to the Bassmaster Classic this week, there was.

Because as the Bentonville, Ark., angler finished his tackle prep work in his Ranger bass boat, he couldn’t stop liking his chances.

“It’s one of those events where the fish are really moving a lot and they are transitioning a lot,” said McClelland. “And it’s the time of the year when I’m going to get to fish a lot of the ways that I really enjoy fishing and to me, that’s all you can hope for when you show up at a Bassmaster Classic.”

But fish movement and fishing methods are only a part of the reasons for McClelland’s confidence in making a run this weekend at a potential first Classic title.

“It’s shaping up a lot like Table Rock did last April, honestly,” said McClelland of his 2017 Bass Pro Shops Bassmaster Central Open title on his home water where the he captured the eighth B.A.S.S. win of his career. “The water temperatures are warming and a lot of the fish are starting to move shallow, potentially some fish have already spawned and you’re in one of those situations where there are a lot of fish in a lot of different areas.”

That being said, McClelland cautions that conditions have taken a step backwards this week as chilly rainfall earlier in the week and overnight lows near freezing since then have cooled the water temperature down.

“With the colder temperatures, that’s pushed a lot of fish off the bank (now) and that could make it an event that is not going to be won by somebody going to the bank and fishing (shallow),” he said.

What about Hartwell’s well-known blueback herring baitfish population and the role that these nomadic baitfish will play this weekend?

“Anytime you’re on a blueback lake, bluebacks are going to play a role in what happens, especially due to the fact that these fish don’t have spawning on their minds now,” said McClelland. “They’re more worried about getting back into that feeding area. The moon phase isn’t making them want to come to the bank and spawn, so the blueback herring are their primary source of (food) on the lake. It’s crazy how they’ll ignore other (baitfish) sources when bluebacks are around. I would think they would prefer bluebacks over threadfin or gizzard shad if given the chance (to choose).”

With some stained conditions developing this week from rain and wind churning the surface of this lake with plenty of red clay banks, McClelland thinks that the 48th Classic derby will be an event that changes a bit from start to finish.

“I really believe it’s going to change day-to-day and potentially change hour-by-hour, depending on what the conditions do,” he said. “I know I saw (things) change a lot from Saturday to Sunday (last weekend) due to the conditions that we saw, from partly cloudy on Saturday to a day of rain and overcast on Sunday. It changed a lot in that 24-hour period.”

Is this event as wide open as some media observers have suggested?

“I definitely think that it’s wide open, but you have to look at the fact that you’ve got some locals like Casey Ashley (who won the Classic on Hartwell in 2015) and Jason Williamson that live relatively close and those guys understand blueback lakes probably as well as anyone fishing today,” McClelland said. “You can’t overshadow that.”

McClelland likes his own chances, too, especially since he thinks there will be plenty of fish just off the bank, a place where his SPRO McStick jerkbait and SPRO RK Crawler crankbait can shine. During practice, McClelland feels like he found the ingredients for success to fish patterns versus spots.

And given the quick-nature of this three-day non-points Classic event, that means making fast, accurate decisions, an ability that McClelland’s involvement with Major League Fishing has honed in recent years.

“When you fish that environment, Major League Fishing makes all of us that have fished it better anglers,” said McClelland. “We’ve learned to adjust a lot quicker because of what we see go on daily with that scoreboard.”

Here at Hartwell, McClelland is hopeful that he’ll be atop the leaderboard come Sunday evening.

But he’s not going to stress out about it all very much, instead, launching his boat, going fishing, and seeing what will happen.