BACK
Drive For Five

VanDam Will Keep An Eye On The Shallow Move 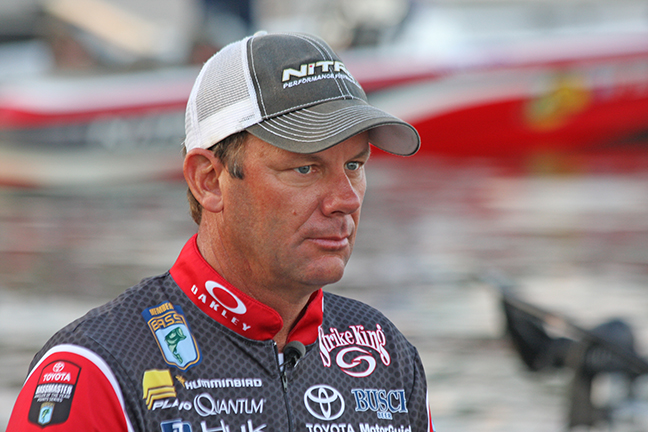 Kevin VanDam hasn't competed at Lake Hartwell since the 2008 Bassmaster Classic, an event he finished 3rd in.

In the very first Bassmaster Classic that I covered professionally back in 2001, Kevin VanDam fished shallow and emerged as the winner at the Louisiana Delta.

Since then, VanDam has not slowed down, collecting three more Classic wins as part of a dominant run never seen before in the sport of bass fishing.

As he set his sights on Lake Hartwell this morning, he’s aiming for a record-breaking fifth Bassmaster Classic title, hoping to move ahead of Rick Clunn, which he’s been tied since 2011 for most Classic wins. To do so, he’ll have to figure out a lake he hasn’t seen competitively since Alton Jones won the 2008 Classic, a derby in which KVD finished in third place.

What’s changed since then in VanDam’s mind?

“The biggest thing is the water level,” said the 50-year old VanDam on the 2018 event’s Media Day. “The last time I was here was 10 years ago. It was 15 feet low and now the lake is full. It’s been low for a while, so it’s got all of that bank grass that’s grown up around it. It’s got unlimited cover options now.”

Add that in with three days of high temperatures in the upper 60s and 70s and VanDam was chomping at the bit to hit the water Friday morning.

“It’s about to get wide open down here,” he said with a smile.

If VanDam is licking his chops about the potential to power fish in shallow water as bass head for the bank and the coming spawn, he’s just as buoyed by the prospect of being able to disappear into Hartwell’s sprawling 56,000 surface acres of water.

“You can get lost,” said VanDam. “You can fish a pattern and have enough lake to run it. You don’t have to worry about normal things in the Classic like running out of areas (to fish), having other guys around you. You can move here. This lake eats 50 boats up like it’s nothing. You may see a few boats running by here and there through the day, but for the most part, you’ll probably not have another competitor around you. And to me, that’s a really great thing (especially) compared to last year at Conroe where it was a small lake and there was a lot of people fishing the same areas. You kind of have to plan for that, so this is a joy for somebody like myself.”

The size of Hartwell will also help VanDam deal with the crush of spectator boats that usually follow him around at most Classic venues, really any place that the Kalamazoo, Mich., angler fishes.

“Yeah, Lake Hartwell, just its size, it will help me be able to manage that (spectator boat traffic),” he said.

Glad to Be Back

If the thought of winning a fifth Classic, which would also extend his B.A.S.S. record to 25 career victories, isn’t motivating enough, there’s the extra motivation based on what didn’t happen here in 2015. That year was when VanDam’s streak of 24 straight Classic berths was snapped following a rare off-year for the sport’s all-time best.

“Well, it (motivated me) the next year for sure,” he quipped with a smile. “The hardest thing for me (that year) was to sit on the sidelines. I had to be out there with the Weather Channel to (do an) interview with them as everybody was taking off. I was sitting on the bank and working the show.”

VanDam did admit to enjoying the first live B.A.S.S. webcast of the event and being able to work with his friend Mark Zona and others.

“To see that first hand and to be able to participate, that was pretty history making in and of itself,” he said. “But no, I did not want to be anywhere around that arena while the competition was going on. It’s a lake that sets up well for me, I think I finished third when Alton won (in 2008) and I thought I’d have a good shot to win that one (in 2015).”

While VanDam feels confident about his chances this year, he admits that the upward trend in temperatures should have the bass on the move this weekend, more so than usual, a fact that could make this anyone’s game.

“It’s about who makes the right moves and adapts to the changing weather because these fish in these blueback herring lakes move more so than probably anyplace else (that we fish),” he said. “And we’ve got the spawn coming, so who knows what’s going to happen.”

He grinned at the mention of the bass potentially heading to the bank as the scenario seems reminiscent of his 2011 Classic win at the Louisiana Delta. In that event, where KVD joined Clunn as the only anglers to win back-to-back Classic titles, he correctly guessed where the region’s bass were heading as the pre-spawn began to transition towards the spawn.

In that event – where VanDam crushed the field with a record setting 69-pound, 11-ounce total – the warming water drew the Lake Cataouatche largemouths shallow to stumps in the “Tank Pond” area where VanDam used a chartreuse and black-backed Strike King KVD 1.5 squarebill crankbait to land a number of 4 and 5-pound largemouths.

“That’s what you have to do, to figure out where the bass are heading to,” said VanDam. “It’s not easy to do. You try to plan for it at every one (of these), but it doesn’t always work out that way. Just looking at the forecast, it’s going to be quite a bit warmer than what they had (previously) said, so it’s going to change things.”