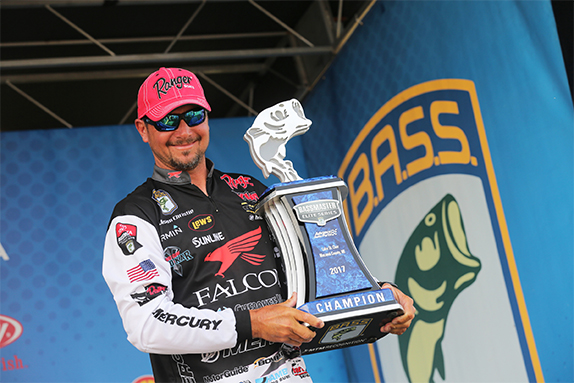 Jason Christie is a creature of habit somewhat, at least at Lake St. Clair.

When the Oklahoma resident won the Detroit River Northern Open in 2012, he spent his tournament in Lake St. Clair, in an area near the mouth of the Detroit River, ripping a tube out of and through some grass. He caught 22-13 on the final day to overcome a deficit of less than a pound.

Fast forward 5 years and that’s exactly how he captured the win in last week’s Lake St. Clair Elite Series. The only difference was the location changed. This time he was in Canadian water, off by himself, in his glory, ripping a tube off the bottom in 19 to 22 feet of water. His 22-00 stringer on Sunday was the heaviest among the 12 finalists and it helped him erase a daunting 3-pound, 4-ounce margin.

This is Christie’s third top-10 and second win at St. Clair in B.A.S.S. competition, a startling stat for a Midwesterner known for his shallow-water prowess.

“I’m comfortable fishing up here,” he said. “I know it doesn’t make any sense – me and smallmouth and grass and 20 feet of water – but it’s one of the few lakes I click with.”

He maintained a 22-pound daily average by settling into an area during practice and patiently narrowing his options during the tournament. At one point, he had a handful of smaller areas about the size of football fields. By Sunday, he winnowed them down to patches roughly equivalent to a basketball court, fitting for the former college hoops standout.

During practice, though, he was a bit anxious because he wasn’t sure he’d be able to zero in on where the bigger fish were in such a big area. In hindsight, he was right where he wanted to be. He made repeated drifts, stayed patient and tried different presentations, which all led to his ultimate success.

“I had a 2-mile by 2-mile area,” he said. “It’s big, but I could fish and get bites there. I think I found the area (in practice), but I hadn’t found the spots. That’s good because in the tournaments I’ve won I always figure it out during the tournament.

“I’d drift and drift and catch a 4-pounder, then mark a waypoint. Pretty soon, those waypoints were coming in clusters. In the tournament, I’d make a drift and then scoot over 100 yards and make another drift. After days 1 and 2, I started to see where the football fields were where I caught lot of the bigger ones. Sunday, I caught most of my fish off two of the football fields. I figured it out during the tournament and kept trying different things.”

Here are some additional details about how Christie clicked with St. Clair yet again.

Christie had his mind made up before he even arrived in the Detroit area that he was committing to Lake St. Clair.

“All the tournaments I’ve fished here, only one hasn’t been won out of St. Clair,” he said. “My experience with St. Clair is there are fish up shallow and out deep. You just need to fish every range to see where the big ones are. It’s hard to eliminate anything because there are fish in all ranges. It’s one of those lakes where if you say, ‘I’m going to fish five feet or less,’ you’ll catch them. Same with 15 feet or deeper.”

In trying to sample it all, an angler can get overwhelmed and also get caught up in catching 3-pounders, which were of little help (and in relative short supply) last week. That’s why Christie forces himself to pick an area and dissect it to find the smaller sweet spots.

Christie started the tournament with a 21-12 bag that had him in 4th after day 1, but he still felt unsettled. He fished a number of spots in the 5-mile area he found in practice and had success on several drifts, but he didn’t feel like he was narrowing anything down.

Compounding matters was the lingering wind that made being efficient a challenge. He weighed in one fish he caught on a Bomber crankbait and the rest came on a tube filled with a 1/2- or 3/4-oz. tube jig.

The prevalent sunshine and high skies on Friday and Saturday were key to triggering the bigger fish to bite, he said.

“When the sun is out, the fishing is better,” he said. “They can see better and are a lot more aggressive. I could still catch them under clouds, but the bite slowed down.”

He relied heavily on his Garmin electronics throughout the event, so much so that he purposely avoided areas where the sand grass was taller than a foot off the bottom. 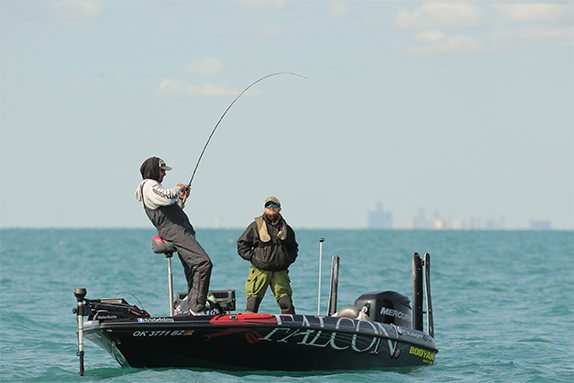 
Christie caught the majority of his fish ripping a tube out of grass using bait casting gear.

“The west side and the south side have a lot of grass that’s tall,” he said. “The sole reason that I ran away from that grass was because of my Panoptix. (That grass) takes my advantage away of seeing them out there 80 feet from the boat.

“The area I was fishing had clumps, but it was just enough that it gave them somewhere to hide if the sun came out.”

In addition to the nearly 90 pounds of bass he caught, he reeled in “a truckload” of drum and some of those helped to give away the location of curious smallmouth that would accompany the drum on its way to surface.

“A drum feeds on a lot of the same stuff as bass,” he said. “Sunday, I caught a walleye, catfish, a bunch of drum – they’re all there to eat. When I’d catch a drum, I’d take it off and flip my tube back out toward where I saw them on my screen and I’d have a smallmouth on before it got to the bottom.”

The common attractant across all the areas he fished was the presence of crayfish.

“The bait in the area was the key,” he added. “It didn’t matter if I caught a bass, walleye or drum. They were all spitting up crawdads.”

With very little contour change across vast sections of St. Clair, he kept trying different depth zones just to see if he could collide with another group of bass.

“I was mainly in 22 feet and I know it sounds crazy, but I’d scoot up to 21 or 20 1/2 and kept experimenting during the tournament and finally found the stretches I needed to fish,” he said. “By 1 p.m. (Sunday), I was fishing areas the size of a basketball courts. It was like when I won the Open – I started with a big drift, then narrowed it down to small areas.”

The tube was his primary weapon on Friday and Saturday – he weighed in one on a dropshot each day – and everything he caught Sunday fell for the tube.

“I’d have rather caught them on a dropshot because I can pitch it out to the fish when I see it (on my screen),” he said. “The weight goes to the bottom and my bait stays above the grass.”

> Main factor in his success – “History. I love this place. What everybody talks about being negatives – no contours, it’s so big – I like that. I can idle around and changes year to year. The wind dictates the current. You have to get out there and fish. I’m patient in practice and all you have to do is find one area.”

> Performance edge – “This lake has so many variables. It’s so rough. The practice days were rough. Everybody talks about being able to run a Ranger, but it’s about being able drift in 3 footers and not fall over. The Drift Paddles from Power-Pole were, but nothing topped my Panoptix. I caught a lot of fish this week by landing that tube within 2 feet of their heads. If he was within 100 feet of my boat, I’d see him I have so much confidence in that unit.” 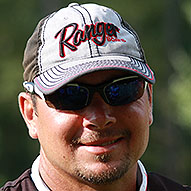