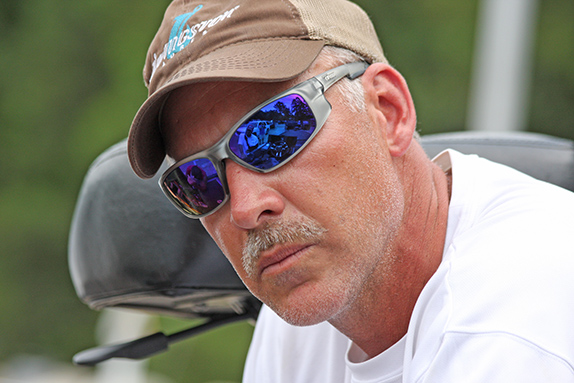 Andy Morgan says it matters very little to him how many days the Forrest Wood Cup is – it won't change his thought process or strategy. Others feel differently, though.

One more day to prepare. One less day to compete.

The Forrest Wood Cup will have a different look to competitors and BassFans next week when the event rolls into Columbia, S.C., for its third stop at Lake Murray. For the first 20 editions of the Cup, or the FLW Championship as it used to be called, competition had spanned four days. This year, the event has been shortened to three days and the 53-man field will get an extra day of practice to figure out the 50,000 surface acres at Murray, which previously hosted the Cup in 2008 and 2014.

The Cup has undergone a series of format tweaks and changes over the years – remember the brackets from 2002-06? – but this is the first time the competition's duration has been altered.

It was a strategic move, according to FLW officials.

“The primary factor in changing to a three-day format for the Forrest Wood Cup was aligning competition days with the FLW Expo (which has traditionally been three days)," said Kathy Fennel, FLW President of Operation. "It simplifies messaging and better accommodates the thousands of fans who travel great distances from all across the country to attend."

Cup practice will begin Sunday and conclude Wednesday, Aug. 9. A day off will follow on Thursday, Aug. 10. The tournament gets started on Friday, Aug. 11 and concludes Sunday, Aug. 13. The full field of 53 will compete on days 1 and 2 before the field is cut to the top 10 based on cumulative weight for the final day. The angler with the highest 3-day total will take home the $300,000 top prize.

While the objective doesn’t change for those competing, the subtraction of a competition day could alter how some formulate and carry out their tournament strategies. Others have said it won’t matter how long the tournament is – they’ll fish the same way for three days as they would have for four.

Finding enough fish for four days in a high-intensity, mid-summer tournament was always a bit of a challenge. Not that the intensity will change in a three-day event, but the marathon feel will be replaced by that of a controlled sprint. There’s still a sense that productive areas won’t get pounded endlessly on day 1, but that will change on day 2 as everyone jockeys to get into the top 10.

Makes No Difference To Thrift

Bryan Thrift has seen the Cup in its many iterations and he says the latest changes won’t impact how he goes about his business.

“It won’t change my approach,” said the reigning Angler of the Year. “I wish it were still a four-day event. That way you had more wiggle room. With three days, a guy can ride a huge day to a win.”

That nearly happened in 2014 when Steve Kennedy caught a tournament-best 20-02 on the final day in the Saluda River only to finish 5th, 11 ounces behind winning Anthony Gagliardi.

He wouldn’t mind if that guy were him next week. He hasn’t finished lower than 7th in the last six Cups.

“I’d love to win the championship,” he said. “I’ve threatened several times and let it slip through my fingers. I always seem to screw up one day here or there. Things haven’t worked out, but the changes this year won’t make me approach it any different. I’ll try to catch the biggest bag I can each day.”

From where Andy Morgan, the fewer days on the water in the dead of the summer in the south the better. That’s why he doesn’t mind the move to a three-day Cup. The four days of practice is another story, though.

“It will change absolutely nothing for me,” the three-time AOY said. “Just the way I fish, I’ll go out and do what I know to do. Whether it’s two, three or four days, they set the time frame and dates and I show up. I don’t have any power over that.

“I don’t know why anybody would complain about it (being three days). It’s not like the fishing will be crazy good. The fishing is usually tailing off this time of year anyway.”

The longer practice session, he says, might lead some to try to do much or cover too much water. He’s undecided whether he’ll utilize all four days.

“I don’t like that,” he said. “The lake will take another beating. They took a competition day and added a practice day. I think some people will over practice for this one, and I like that. I may not even go (to Columbia) until Sunday. I don’t want any more practice. I’m good on three days. I don’t want to mess around with that.”

Morgan doesn’t expect much to change in terms of where the fish are positioned since they’ll have long been in their summer patterns.

“Once you start practice and everyone’s on go, the mindset is to go, go, go,” he said. “It’s summertime. There will be no cold fronts where it’s going to drop into the 30s. There won’t be chains of migrating fish these days. There’s a lot you can skip and not bother with. I think over practicing will hurt the weights. We’re educating more fish by adding the extra day.”

This will be the 16th Cup for Wesley Strader and his ninth in a row. He also competed in the three-day Bassmaster Classic earlier this year and is veteran of FLW Series and Bassmaster Opens, both of which follow three-day formats.

But he wishes FLW would’ve left the Cup at four days and not instituted such a drastic cut.

“I’m not sure about the three-day thing,” he said. “It’s always been a four-day event and it’s not like you can judge it after two days.”

He pointed out that a rally from down in the field on the final day similar to the one Jordan Lee pulled off at the Classic this year won’t be possible with FLW cutting down to the top 10 for day 3. 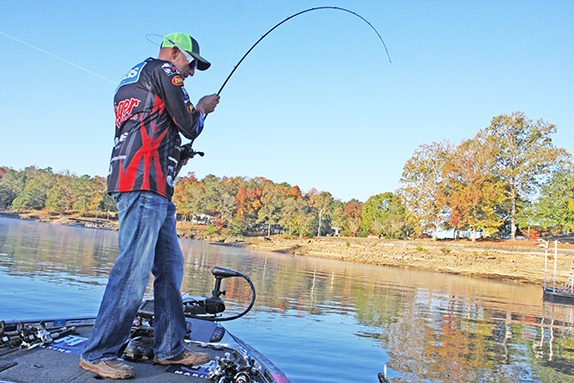 
Wesley Strader isn't a fan of the additional day of practice FLW has given Cup competitors.

“It takes some players out,” he said. “Murray is a tough fishery, but like Kennedy did (in 2014), if it’s a three-day deal, you’re going to take some people out of play, but will also keep the consistent guys in play.”

One thing Strader isn’t a fan of is the extra practice day. It’s overkill, he says.

“The whole year it’s been three days of practice,” he said. “All they’ve done is take away a competition day and make it a practice day. Why not leave it? It’s going to take you out of your routine. Our routine if three full days so I don’t know if I like or don’t like it.”

For younger anglers and relative newcomers to the pro ranks, like Jeremy Lawyer, the financial burden of making a trip to Murray to pre-practice might’ve been prohibitive. With the four-day practice session preceding the tournament now, Lawyer thinks that might help guys in his position who weren’t able to check out the lake before it went off limits.

“I like the extra day of practice because I won’t get a chance to pre-practice,” he said. “I think I would probably rather have had a four-day event because if you can make the top -20 cut and manage your fish … I’m a 12- to 15-pounds a day kind of guy who might be able to do better in a four-day event than 17- to 20-pounds a day in a three-day event.”

The shorter event likely won’t change what patterns he ultimately fishes, but it may impact how he fishes certain areas.

“Just knowing ahead of time that we have that option, I’m going to plan accordingly to find enough fish for three days because you’re going to be able to lean on them a little harder,” he said. “You’re probably going to have to. I think the weights will be up a little bit.

“I guess it’ll be different having never done it before, but it’ll be like a (FLW) Series event. It’ll be different, but everybody will be prepared for it and I think you’ll see some better weights.”

> 2002: Full field days 1-2 with 48 pros seeded according to AOY standings and compete head-to-head with the heaviest 2-day weight from each bracket advancing to day 3. Weights zeroed for day 3 with 24 remaining pros continuing head-to-head competition on day 3. Weights zeroed and 12 remaining pros continue head-to-head competition on day 4. Anglers reseeded according to cumulative weight through three days. No. 1 and No. 2 seed compete for first and second place, etc. Co-anglers compete in traditional format. Full field days 1-2, top 24 advance to day 3 where they start from zero. Heaviest final day weight determines the co-angler winner on day 3.

> 2003-06: Full field days 1-2 with 48 pros seeded according to AOY standing and compete head-to-head with the heaviest 2-day weight from each bracket advancing to day 3. Weights zeroed and 24 pros continue head-to-head competition on day 3. Weights zeroed and 12 pros continue competition on day 4. Final place for the top 12 determined by their final day’s weight. Co-anglers compete in traditional format. Full field days 1-2, top 24 advance to day 3 where they start from zero. Heaviest final day weight determines the co-angler winner on day 3.