Try These Tips For Throwing A Punch 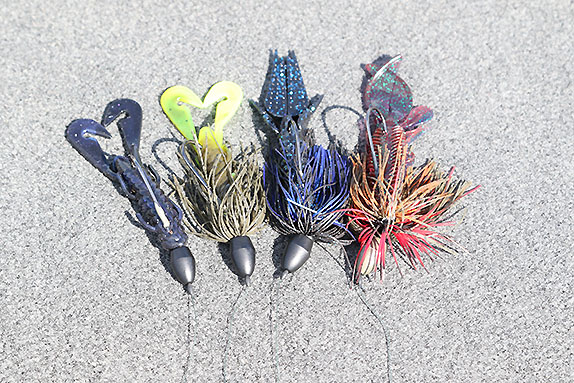 Sometimes Joe Holland wants a colorful, multi-level design; other times he likes to keep it clean and simple. If you don’t know him, that might sound Holland makes his living as an interior decorator. But those who do know Holland know the FLW Tour pro earns his keep in the bass biz — often with a punch rig.

Heavy line, big weights, backbone-rich rods — Holland’s program pretty much follows the script for a technique used from Lake Okeechobee to the California Delta. However, he’s keen to implement multiple looks based largely on punch skirts.

In super-heavy mats where it’s almost always a straight-up reaction bite, he’ll keep it simple with either a single-skirt rig or a naked rig. However, when he’s pitching less dense cover where he knows his bait might make it to the bottom, he has a clever plan for visual stimulation.

“I’ll mix and match my punch skirts and a lot of times, I’ll use contrasting colors or colors that complement one another,” Holland explains. “For example, I’ll put a green-pumpkin skirt on first and then a chartreuse, so as that lure’s falling, the fish will only see that darker green-pumpkin. But when you stop it and pop it, or if it hits the bottom and flares, the fish sees a very different color.”

Creative, for sure, but do fish care? Holland thinks so; and he bases that on forage behavior.

“If you watch baitfish or crawdads, when they’re in their defensive mode they’ll flare out and change color. Panfish will flare their gills and that’s their defense color, so I try to imitate that in my punch rigs.”

Holland’s not convinced the multi-color thing matters much in the shadows beneath thick mats, but it’s definitely a solid strategy for pitching to reeds, grass edges and even laydowns. For the latter, Holland often stacks three skirts to show the fish a triple color display.

Holland uses two types of skirt material, each with its own benefits and applications. One is a flat silicone skirt, the likes of which often hang from jigs and spinnerbaits. Hugging the bait’s profile, this one excels at getting into and out of heavy cover that tends to tug on his other skirt material — a round, living rubber called Star Flash.

“When I’m in more open (scenarios) where I’m pitching to vertical targets like buggy whips and reeds, I’ll go to that Star Flash (and) more flare and more movement," he said. 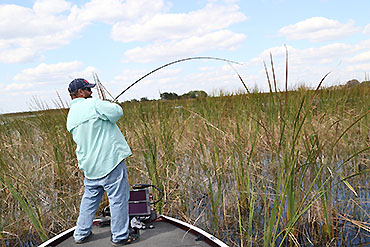 
In vertical cover such as reeds and buggy whips, Joe Holland finds that his strategy of double and triple punch skirts can work wonders.

When situations allow, he’ll occasionally stack a Star Flash skirt atop one or two silicone skirts to change up the looks

In terms of bait selection, Holland uses a Gambler Why Not when he wants a subtle-action bait that penetrates cover well and accommodates a strong hook. If he needs a more active presentation, a Gambler Burner Craw gets the call.

Holland said he’ll try matching bait and punch-skirt colors and contrasting options until he determines what’s triggering bites that day. And, of course, experimenting with dyed bait tips can spice up the total package.

Bassmaster Elite pro Russ Lane offers a strategic twist for punch-rig application. He employs it when he wants the look of a big bait, but he doesn’t want a big bait doing the heaving lifting.

Lane’s technique involves beefing up a Texas-rigged Big Bite Baits Yo Daddy by adding a punch skirt. Lane admits that he’s far more likely to use this accessory to escort big baits and heavy weights through dense vegetation, but in certain scenarios, he finds it advantageous with a moderate-sized Texas rig.

Lane notes that pitching a Texas-rigged soft plastic with a punch skirt proves more efficient around hard cover, which tends to catch a jig’s exposed hook.

“If I take a small-profile plastic bait, add a 1/2-ounce weight (pegged with a rubber stopper) and add a punch skirt and basically, you have a compact, super-weedless 1/2-ounce jig,” he said. 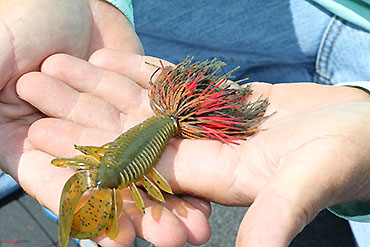 
With multiple punch skirts, the fish see the first color during the fall. Once a bait reaches bottom, the second and third layers of punch skirt color flare outward.

Lane also points to his ability to influence fall rate with heavier Texas rigs. Windy days often necessitate heavier rigs for pitching accuracy, but more weight means a faster fall. Adding a punch skirt creates more drag and that works similar to a parachute and allows his bait to fall at a more favorable rate.

First, he prefers high-visibility line, which allows him to detect the slightest movement as his bait breaks through cover. A slight tick could be his bait impacting a bass’s jaw, so noting any such hook-set cues is critical.

“Be a 100-percent line-watcher when you’re punching,” Mah said. “Many of your bites — and the bigger bites — come on the initial descent.”

The downside of bright line is its fish-spooking intrusion. Mah fixes this by marking the first 6 feet of his line with a black permanent marker. Not only does this mask the bothersome color, it provides an instant depth reference. He’s rarely punching deeper than 6 feet, so watching how much of the blackened line disappears tells him how far his bait has fallen.

(Tip: Splitting the marker’s tip with a razor blade allows you to slip your line between the halves for even marking.)

Lastly, punching encounters are typically brief and the longer a fish holds onto the bait, the better. Mah coats his baits with Procure scent enhancement to encourage fish to grip the bait an extra second or two.

When dealing with fish in cover, any advantage is a big advantage.