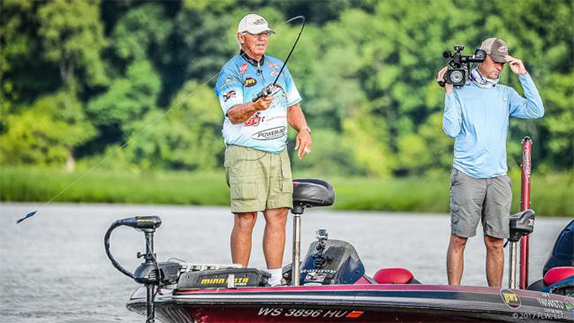 Tom Monsoor was in his glory at the Potomac River, casting his swimjig across grass flats all week.

Typically, when an FLW Tour or Elite Series tournament comes down to the final two competitors on stage on the final day, there’s a distinct physical and vocal reaction when the winner realizes the outcome has gone his way. Arms are thrust in the air. Fists are pumped. Some guys scream to the heavens. Others break down in tears.

Tom Monsoor did none of that Sunday.

After the 68-year-old realized his 15-02 stringer was enough to hold off Oklahoma rookie Chad Warren for the win at the Potomac River FLW Tour, he didn’t move. Monsoor stood motionless, as if a state of shock had overtaken him. A look of disbelief washed over his face. Then, he smiled that contagious smile.

“I didn’t believe it was real,” Monsoor said.

A veteran of 14 years on the FLW Tour and arguably one of the best swimjig fishermen the sport has seen, Monsoor can finally call himself an FLW Tour champion despite weighing in progressively smaller stringers each day of the event. His 66-11 total gave him a 5-ounce victory over rookie Chad Warren, who caught 15-09 today.

Monsoor is the fourth first-time FLW Tour winner this season and he nabbed his victory by fishing a technique he’s very familiar with. All of the fish he weighed in this week were caught on a 1/4-oz. black and blue homemade swimjig with a creature bait trailer. It was very much the same way he fishes at home on the Mississippi River in La Crosse, Wis.

He’s won several BFLs and a four-day FLW Series event, all of which had come in his backyard on the mighty Mississippi, so he relished the opportunity to seize this moment away from home.

Chris Johnston gained one more spot today with a 15-11 effort and took 3rd with 65-08. Cody Meyer had 16-09, his heaviest bag of the week, and will head off to the Forrest Wood Cup with the momentum of a 4th-place finish after closing with 64-11.

A stiff south wind created white caps on the main river and pushed the tide in harder and faster this morning, forcing some to abandon plans to switch creeks or target grass beds on the main river. Others opted to hunker down in the community holes that churned out fish all week.

A swimjig was a key element to several of the finalists’ programs as were vibrating jigs and soft stickbaits, all typical presentations on the Potomac, which turned out an impressive number of quality fish in the season finale.

The 2018 Tour schedule will be announced in three weeks at ICAST while the Forrest Wood Cup is set for Aug. 11-13 at Lake Murray in Columbia, S.C. 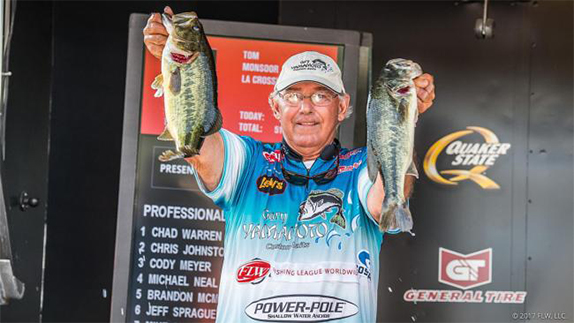 
Monsoor is the oldest angler to win an FLW Tour title.

After catching 15-05 on Saturday, Monsoor was nearly certain that others would bypass him on the final day. His confidence in his best spot started to waver and while he said he was going to fight to the last cast, he sounded nothing like a man on the verge of capturing his first Tour win.

As it turned out, a move to escape the wind-blown main river today was Monsoor’s saving grace. After catching a limit on his first spot, he left the white caps of the Potomac and headed back to Quantico Bay, where he’d been catching his quality fish.

He culled three times and caught his biggest keeper there.

“I said, ‘I’m not going to fight this wind,’” he said, referring to his decision to escape the deteriorating water conditions. “I was going to where the wind wasn’t blowing. It was a tough ride to get there and back.”

Each fish he weighed today and throughout the tournament was caught a 1/4-oz. swimjig equipped with a Gary Yamamoto Custom Baits Flapping Hawg (black/blue). He also caught fish on a Yamamato Swimming Senko and a regular Senko, but the better fish wanted the jig.

“I found one area that had some better ones and I just stuck with them,” he said. “The wind made me go where I went. I was thinking about running around for better fish today, but the wind made me scrap that. I figured I’m going to go where I can have fun. I said, ‘If I’m not going to win, at least I’ll have fun.’”

After getting back to shore, the chatter was about Warren possibly having enough to overtake Monsoor.

“I knew (Warren) had a big bag and McMillan’s fish ran out,” he said. “I guess Warren overestimated his weight by a couple pounds. I’m glad he did.

“I thought I had 12 pounds. When we pulled them out they looked a lot bigger.”

Additional details about Monsoor’s and the rest of the top 5 finishers’ patterns will be published later this week.

2nd: Warren Thought He Had It

Coming off an 18 1/2-pound day on Saturday, Warren’s confidence was soaring entering the final day. He ran into a flurry of bites early on today – he was culling by 7:40 a.m. – and amassed most of his weight by the time Father’s Day breakfast was being served.

What was frustrating was that he couldn’t generate any bigger bites later in the day. As it turned out, one more cull could’ve swung the outcome in his favor. 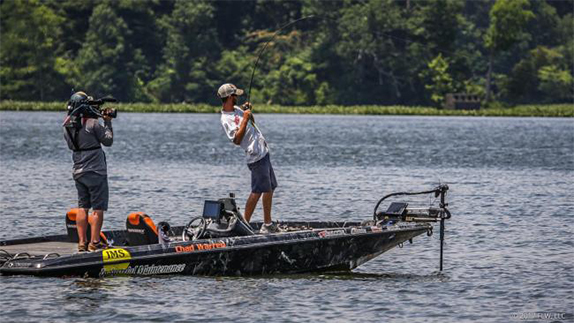 
Chad Warren relied on a popper-style bait this weekend to seize a runner-up finish.

He didn’t lose any fish throughout the final day, but was lamenting several missed opportunities over the course of the event.

“I lost four fish over the course of 4 days and any of them would’ve won it for me,” he added. “Overall, I have no regrets. I made good decisions. I just didn’t fish clean except for today.”

After having success with a variety of baits over the first two days, he relied on a popper on the weekend.

“It was pretty random,” he said. “It was just a big grass flat where I was. The key was to throw it as far as I could because they wouldn’t eat it near the boat.”

Johnston has competed several times in the month of June at the Potomac and has come away with plenty of finishes in the money. He felt like this week was his best chance to finally break through with a win.

If he’d been able to connect with one more 4-pounder, maybe that’s how it would’ve turned out, but as it stands he wrapped up his second year on Tour with a top-3 finish.

“It’s good and I’m happy with it, but you always want to do a little better,” he said. “I’ve come close at the Potomac before and I still want to win one. I felt like I had just as good a chance as anyone this week. I just didn’t get that big bite.”

He rotated through a few spots in Mattawoman Creek near the launch ramp today rather than follow the tide up and down the wind-blown river. He left once to check a spot on the low-tide portion of the day, but eventually returned.

“My other spots were drying up so I stayed in there all day,” he said.

A smaller profile 9/16-oz. black jig with a Zoom Small Salty Chunk Jr. trailer was his best producer this week as he targeted pockets and holes in milfoil. 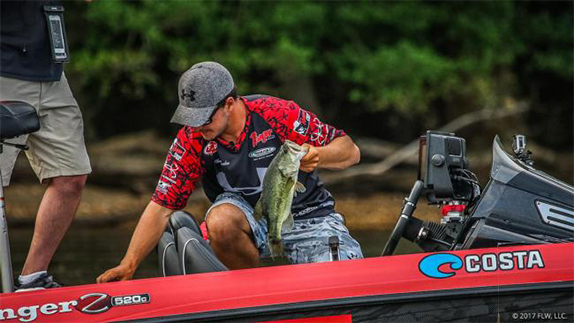 
Chris Johnston notched his best finish of the season this week.

Entering the season finale, Meyer would’ve been satisfied with a 100th-place finish if he knew it would secure him a spot in the Cup. Collecting a third top-10 of the season and ultimately finishing 6th in points will give him an additional shot of momentum heading to Lake Murray in August.

“It was awesome,” he said. “I’m so excited and am extremely happy with fourth. Practice was slow, but I got into community holes and figured out during the tournament how to catch them. When I do that, that’s when I have better tournaments.”

He had the market cornered on 3- to 3 1/2-pounders all week and never caught anything over 4.

"I caught probably 40 to 50 bass today, maybe a dozen over 3 pounds,” he said. “I was having so much fun. My ribs are bruised from setting the hook.I was catching so many fish between Saturday and today, I feel like I could’ve fished another 5 days and kept catching them. It was phenomenal.”

He had a multi-faceted approach in terms of techniques and baits, but all were standard Potomac River/grass-fishing fare. He flipped a Strike King Rage Craw on low-tide scenarios, then threw a swimjig when the water was on the rise and added a Strike King Pure Poison vibrating jig when the tide was high.

“It wasn’t anything special about the baits or areas,” he said. “I figured out what they wanted on what tide and there were key areas in those community holes I keyed in on.”

Neal has had good looks at FLW Tour victories before. Same with the Forrest Wood Cup. Each time, something goes awry and the chances slip through his fingers. He’ll look back at today as another missed opportunity.

Despite weighing the second-heaviest stringer of the day, he feels that if he’d landed all of the fish he hooked, he’d be the one celebrating his first career win.

“I blew it,” he said. “There’s no other way to put it. I would’ve weighed only my biggest two if I’d have landed what I had hooked. I think 19 to 20 pounds was possible.”

The frustrating part for Neal was that his line never broke nor did he knock one off with the net. It was just a case of bad luck.

“I can’t tell you what I did wrong,” he said. “It was one of those days where nothing goes the right way. This is the first time I’ve ever had the bites to win and not capitalized.

“It was still a great bag for the conditions and the wind and everything getting beat up. It could’ve been a miraculous comeback.”

He relied on a swimjig, a vibrating jig and a shallow-running SPRO crankbait this week, working everything through milfoil or eelgrass depending on the tide cycle and location.