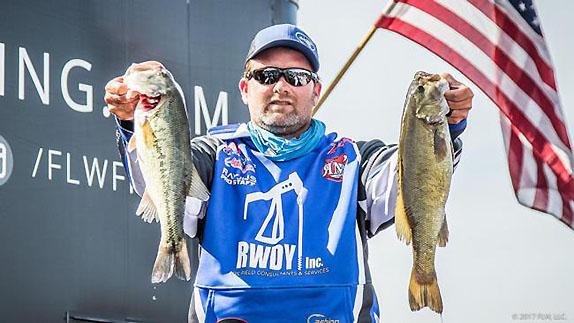 After a season of ups and downs, Christopher Brasher hopes to cap it off with a trip to the Forrest Wood Cup.

If one were to chart the dots representing Christopher Brasher’s 2017 FLW Tour finishes on a sheet of paper, the resulting line connecting those dots would closely resemble a stenograph during a severe earthquake.

There have been some extreme high points and severe low points and very little in between for the Texas native who’s in his fifth full season as a Tour competitor.

He started off strong with a top-10 at Lake Guntersville and a top-20 at Lake Travis, but followed that up with a 96th in Florida (Harris Chain) and a 122nd at Lake Cumberland. He bounced back with an 8th-place showing at a flooded Beaver Lake before logging a 109th at the Mississippi River last month.

With three premium finishes and three bombs to his credit, he’s 44th in AOY points and firmly on the bubble to qualify for the Forrest Wood Cup, an event he’s competed in just once before. His performance at the Potomac River this week will dictate if he will be heading to Lake Murray in August for this year’s Cup or back home, where he guides at Lake Fork and other fisheries around Spring, Texas.

“It’s been a roller coaster ride,” Brasher said, summing up his season so far. “It started off with the best start I’ve ever had. Usually, we start in Florida and I bomb and have to dig out of that hole the rest of the season.

“I’ve had breaks go my way and adjusted a lot better during the tournament at the ones I’ve done well at.”

At the most recent tournament at La Crosse, Wis., Brasher feels like he played it safe in an effort to protect his points position. As a result, he limited himself to Pool 8 and struggled throughout.

“I felt good about it, but not great because I knew I’d have to fish in a crowd,” he said. “The only thing I’m kicking myself about is everything in my head told me to lock up on day 2. The way the points were, I decided not to with the barge traffic. Looking back, I feel like I fished too conservative there.”

Indeed, Brasher’s showings at Guntersville and Travis represented the best Tour finishes of his career and for them to occur in back-to-back events to open a season gave him hope that big things were possible in 2017.

When the scene shifted to Florida, though, the old Sunshine State demons reappeared and he lost his early-season momentum.

“You’d think with me being from Texas and having fished grass my whole life, I’d be able to catch them there,” he said, “but the only check I’ve earned in Florida was an 80th at Okeechobee (in 2013).”

At Harris Chain, he salvaged a good day 1 despite a bad boat draw and maximized a sight-fishing program. On day 2, however, he got stubborn and tried to force the sight-fishing plan and never checked his plan B areas.

A month later, he never got comfortable at Cumberland and it showed in his result. He caught nearly 11 pounds on day 1, but failed to bag a limit on day 2 and went home with his worst finish of the season.

“It’s been a weird year for me,” he said. “I don’t think I’ve had a year with this many bad and this many good finishes.”

The ups and downs are nothing new to Brasher, who played baseball in high school. His athletic background has helped him manage the challenges that fishing throws at him.

“I really try to keep an even head,” he said. “Having a sports background and playing ball through high school, I try to look at each tournament as its own game. It takes a lot of mental toughness and that really helps with fishing. It’s the most mental sport I’ve been a part of.”

After four events, Brasher was 46th in points heading to Beaver Lake, where he’d posted top-30 finishes in three of his previous four trips to northwest Arkansas. He was anxious to snap out of his two-tournament slump.

“I had confidence going to Beaver because of my history there,” he said. “It worked out a lot better than I thought.”

He caught nearly 16 pounds amidst challenging, flooded conditions on day 1 and never caught more than 9 pounds the rest of the way en route to his second top-10 showing of the season.

“On day 1, I caught what I thought I could but the water came up too much,” he said. “It’s hard to cull when you have 15 1/2 pounds at Beaver. I left those fish and practiced. It was junk-fishing from then on.”

Right now, Brasher is seven points out of 40th in the Angler of the Year standings, which is the unofficial cutoff after factoring in anglers who’ve qualified in more than one way. That number could change depending on where Jeremy Lawyer and Zack Birge finish this week. They are 36th and 37th, respectively, and are considered double-qualifiers at this point. Brasher will be rooting for them to stay in the top 37 and hope he can get dialed on a productive pattern at the Potomac.

In two previous Tour events at the Potomac, Brasher has yet to finish in the money, but he’ll head to the nation’s capital with a confident mindset.

“I really feel like I’ll fish to catch what I can,” Brasher said. “I won’t play it conservative. I’m going to try to make the top 10 and leave no doubt about it. The way the season has set up, every lake I’ve been to before I’ve caught them good this year. The lakes we haven’t been to before are the ones where I haven’t caught ‘em. I’ve been to the Potomac a couple times and I’m comfortable there.” 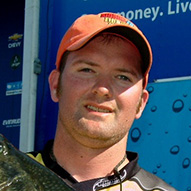