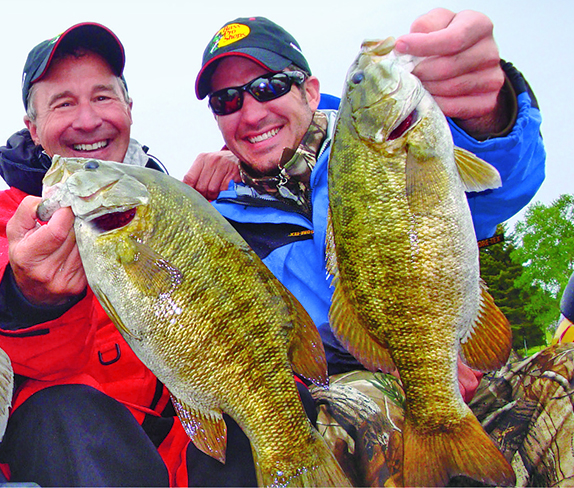 (Editor's note: This is part 3 of a 3-part series on athletes in other professional sports who have a passion for bass fishing. To read part 1 about former NHL player Bryan Bickell, click here. To check out part 2 about Minnesota Vikings defensive end Brian Robison, click here.)

Auto racing sometimes comes down to hundredths, even thousandths, of a second. On a 2 1/2-mile super speedway or a half-mile short track, millimeters matter greatly. Much like ounces on the water.

Martin Truex Jr. is well versed in both.

Listening to Truex talk about bass fishing, one would think he makes his living on the water rather than behind the wheel of a NASCAR Monster Energy Series Cup car.

As a kid, Truex would load up his bike with rods, tackle boxes and anything else he could carry, and fish the banks of small lakes near where he grew up in south New Jersey.

As a teenager, he bought a 10-foot plastic boat and rigged it with a trolling motor. His mom would drop him off and he’d fish for the day. Sometimes he’d head out with his cousins or he’d go solo.

Fishing runs in the Truex family. Martin Sr. runs a commercial clamming business and his family is full of saltwater fishermen. There were always bay boats around when he wasn’t pond-hopping.

Whether he's throwing topwaters on spinning tackle for bluefin tuna, hunting sailfish or out with his dad, Truex can't get enough.

Truex enjoys fishing new bodies of water when he can. The challenge of figuring them out is akin to dialing in a car during qualifying and practice sessions.

“I do try to get away, but when I get to the lake I get real serious about it and I really try to challenge myself most of the time and try and catch some big ones,” Truex said.

Ryan Newman, another NASCAR driver, is a good friend who’s also into fishing. Over the years, they’ve amassed a list of honey holes and favorite lakes they hit when they roll into town for a race.

“We actually have a handful of places on the circuit that we hit every single time we go, it’s almost like a tradition,” Truex said.

Sometimes, they’ll fish off the bank or use the three-piece box boat that Newman brings with him on the road. Earlier this spring, Truex decided to stay on the West Coast a few extra days to hit some Southern California lakes utilizing finesse gear, braided line with a 6-pound fluorocarbon leader and “tiny worms,” he said.

“That was cool because that is stuff I can use at home on Lake Norman where I live, so that will work out good for me,” Truex added. “It was cool to check out new water and the chance that I could hook into a 10-pounder at any time.”

When asked to pick his favorite way to catch bass, Truex said nothing beats a topwater bite.

“I love throwing a Spook all day if they would bite it,” he said.

He’s a big fan of surface baits, but like any serious angler, he’ll throw whatever bass are biting on a given day.

From sight-fishing to jigs to swimbaits to umbrella rigs during the winter, he likes to have plenty of options laid out on the deck of his own Nitro Z-21 powered by a Mercury Optimax 250.

He lives on Lake Norman and spends many days during racing’s offseason on the water there.

“I had a pretty good February this year on the lake,” he said, adding that he coaxed a 7-pound largemouth out of a brush pile that has yielded several other 5-plus pounders.

Recently, he began to understand how to catch a big female on a bed without hooking the male first.

“We were trying to get the male all fired and not hook it, just let it spit the thing out,” he said. “That would get the female fired up and she came over and ate it.”

He’s confident the trick will help him put some bigger fish in the boat next spring.

Speaking of big ones, Truex’s girlfriend is from Michigan and when his schedule allows, he heads to Grand Traverse Bay in June each year to chase trophy-caliber smallmouth that are typically up shallow that time of year.

“I really love catching them, and I only get to do it once or twice a year. It’s something different,” he said.

According to Truex, attention to detail and not ignoring the little things is a concept that applies both on the track and the water.

“I think there is something in the brain that separates the guys that are really good at what they do from the ones that are not,” he said. “It’s just that attention to detail and it’s being able to see the small things. They can see the tiniest thing on the water and the next thing you know they are just whacking them. That’s the difference.”

It’s no different when he’s racing. When he alerts his crew chief about a small change he’d like make to his car’s set-up, it can result in a better-performing machine.

“It’s the attention to detail, it’s that drive to be the best of the best and, you know, the passion to be able to put in the time to make that happen,” he added.

Truex’s big break in NASCAR came in 2003 when he was hired to drive for Chance 2 Motorsports, a Busch Grand National Series (now the Xfinity Series) team owned by Dale Earnhardt, Jr. Bass Pro Shops had a relationship with the Earnhardts and everything fell into place for Truex from there.

“It so happened they put together sponsorship for the car I was going to drive,” Truex said. “It was luck and fate that we got together then.

“We hit it off well, and I love the outdoors. It’s a perfect sponsor for me since I love hunting and fishing. I’ve developed an awesome relationship with Johnny Morris and all the folks at Bass Pro and they’ve been such huge supporters of my career.

“I remember as a kid I’d get the Bass Pro catalog in the mail and circle all the things I wanted, but wouldn’t have much money so I’d buy one or two bags of worms at a time. It’s crazy how it all worked out.”

Since moving to North Carolina, Truex has fished some night tournaments, but with such a hectic race and sponsor responsibility schedule, it’s hard to commit to any events in advance. That doesn’t mean that he has closed the door on competitive fishing.

“Every time I turn on Major League Fishing (MLF), I’m like, ‘I want to do that.’ It looks so fun,” he said. “I think it would be fun to dabble in tournament fishing but it takes such a commitment. When I talk to (Kevin VanDam), I’m amazed at the commitment that they have to fishing, being on the road all the time. They are driving across the country back and forth.”

It’s not in his personality to just go through the motions, he’d have to be all in.

“It probably wouldn’t work out,” he said. “Maybe some local stuff would be fun just to keep it low key.”