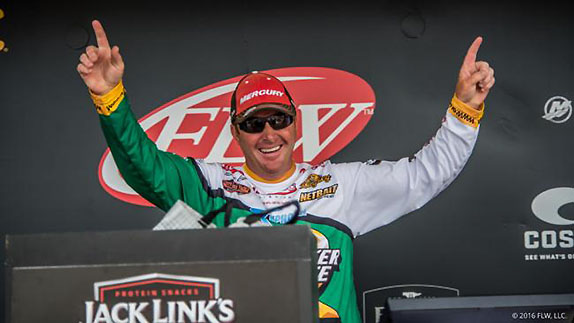 Scott Canterbury racked up more than 62 pounds en route to winning at Beaver Lake last year, but many are predicting weights to be a bit lower this time.

Beaver Lake is unquestionably a better bass fishery these days than it was a decade ago. It may or may not confirm that this week when the FLW Tour makes its annual visit.

Fishing conditions on the White River impoundment were pretty good when the anglers rolled into Rogers, Ark. over the weekend to begin practice. They've deteriorated a bit since due to a massive influx of water, and that doesn't look like it's going to stop.

The water level is more than five feet higher than it was a week ago and the temperature has cooled off some. Rain continued to fall on Wednesday – the off day between practice and the start of competition – and the air temperature dropped into the 30s overnight.

Many of the heaviest stringers in recent years have come from upriver, but at the moment you don't have to travel very far in that direction to encounter oozing mud. That scenario alone could cause the lake to fish much smaller than it did a year ago, when Scott Canterbury won with a four-day total that exceeded 60 pounds.

Before getting into more about the bite, here's some info on the lake itself.

Here's a good look at Beaver (depth contours included), courtesy of the folks at Navionics:

Brad Wiegmann, who runs a guide service on the lake, is among those who believe that most of the 164 competitors will be bunched up in only a select few locales.

"The river arms are muddy all the way up to Horseshoe Bend and the water still has silt in it – the kind of dirt that it's very hard to catch fish in normally," he said. "That'll push everybody into a smaller area where they're right on top of each other. Somebody could do well with a crankbait or spinnerbait where the clear water and the mud mixes, but I kind of think someone who's good with a jig might sneak in on this one.

"Someone fishing in that 8- to 12-foot range, where the shallow water was before the lake came up, could do pretty good."

Sight-fishing could be a factor, but the setup is far from ideal for that tactic. Wiegmann believes that the bulk of the spawn concluded on the last full moon and fish that moved up recently are now in much deeper water than they were when they staked out their territory. That makes those fish not only tougher to find, but far more difficult to make proper presentations to.

Jay Yelas
"In all the years I've been to Beaver, this is the first time the lake's been on a fast rise. It came up three feet last Friday, then about three inches a day during practice, and then probably another three feet today and overnight because of the big rain last night. It's like a bomb went off upriver – there's debris floating everywhere and chocolate mud. The water temperature had been in the low 60s, but this is a cold rain, so who knows what it's going to do to that. It's anybody's guess how it plays out.

"The bite in practice was tough for me – a lot tougher than normal. I think it's because the fish are acclimating. You can catch some and I've talked to some guys who've had banner days, but I didn't. The best I would've done was about 11 pounds. The weights should be way down – it might take 12 pounds a day to make the cut and 17 or 18 (for the first two days combined) to make the money.

"The upper half was real muddying during practice and with all the extra rain, it might get pulled down the lake. All told, by opening day the lake will have risen about 7 feet in 6 days. In my experience, that makes for a really tough derby."

Todd Auten
"I caught probably four or five keepers a day, just messing around and trying different things, but I never got any good bites. Anything over 3 pounds, I haven't had my first one yet. I've seen a couple follow my baits, but I haven't caught any of them. 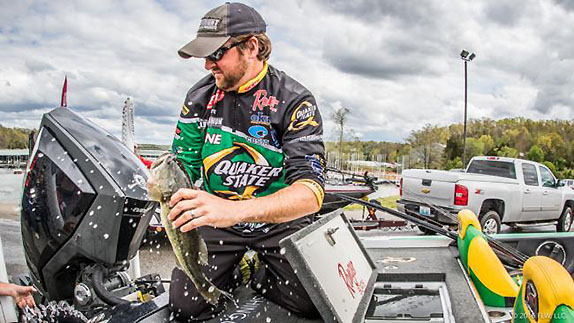 "I'm a shallow-water guy and I usually don't mind some mud, but some of this mud here you could walk on. I went up both the White and the War Eagle and there's logjams floating up there. I think a lot of people are going to be hitting the same stuff and I think a lot of it's gotten beaten up already.

"It'd be nice if we could get a shad spawn going, and I think there's a little bit of that, but not much. With this rain cooling off the water, there might not be any of it happening. I might just have to start over."

Andrew Upshaw
"It's definitely a different Beaver Lake than I've ever seen. The fish seem to be in a late-spawn/post-spawn funk and there's been a lot of change in the water levels, and it's going to keep going up because we're getting more rain and the ground is saturated.

"Some fish moved up on the beds the day after the water came up and they were catchable. I'm going to run that and see what's going on, but I'm going to have to be able to adapt on the fly. Sight-fishing might play one day, but I don't think it's something that anybody's going to be able to use throughout the event.

"It's definitely not as good as it was last year, but I've got a couple little deals that I'm excited to go out and try and see what happens. Whoever wins is probably going to have to figure things out during the tournament."

Todd Hollowell
"It's a confusing time to be here. You look at the calendar and you see it's late April, the fish should be spawning everywhere and the fishing should be fantastic, but it hasn't shaped up that way for me. I'm not exactly sure what's going on.

"I think a lot of them are still spawning, but they're just really deep. With all the extra water on top of their heads, you're just going to go right by them.

"This is my sixth time coming to Beaver and the more I've been here, the more I've realized that if fishes small anyway, and that's certainly the case now with a large portion of the river seemingly out of play. I think a lot of people are going to congregate in the clearer water.

"Everybody will catch fish, but the overall weights will probably be down from last year. You've got to stumble into the right quality."

J.T. Kenney
"I had what I thought was a pretty good practice. I tried to build on what I found last year (en route to a 5th-place finish) and it seemed to be working pretty well, but I have no idea what's going to happen now with the water coming up this fast.

"I talked to some guys where were getting bit in the river, about halfway up where the water's stained by still pretty decent. They said it looked muddy, but you could still see your bait down a foot or so.

"One good thing about Beaver is that a lot of the banks are so steep that the water doesn't flood for miles out in the woods when it comes way up. It might flood some trees in the backs of pockets, but maybe it won't affect the fishing that much.

"I saw some big largemouths before the water started going crazy, but now I'm just not sure if I'm going to see them again or not." 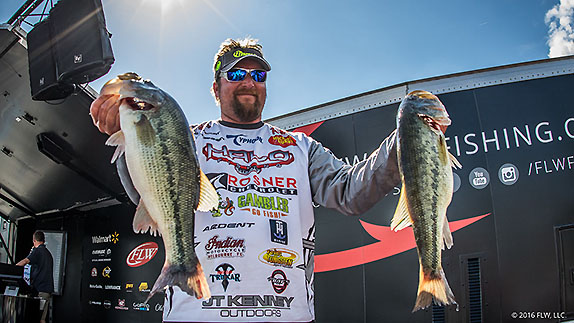 
J.T. Kenney had a good practice, but says that might not carry over to the event due to the dramatically higher water level.

With the above (and more) in mind, here are BassFan's recommendations for the top 10 to watch in this event.

1. Bryan Thrift – He's finished among the top 12 in all four events this year, including a pair of runner-up showings, and he's won at Beaver before. With his propensity to bounce around like a pinball, he'll come across something good.

2. Matt Arey – His annual trip to Beaver has become nothing short of a money grab. He handed over the crown to Scott Canterbury last year after winning the two previous years, but not without a fight – he ended up 7th.

3. Scott Martin – The winner earlier this month at Lake Cumberland has a recent track record at Beaver that rivals anyone other than Arey. He credits the lake and the huge variety of scenarios it presents for making him a better angler and he'd love to have a trophy with its name on it.

4. Clark Wendlandt – The veteran from Texas notched the first of his four Tour wins at Beaver in 1999 and pocketed a lot of money from the event over the years. He's fishing well and another stout paycheck is likely.

5. Scott Canterbury – He's been on a nice roll since his Beaver victory last year and comes in off a 5th-place showing at Cumberland. It wouldn't be a big shock if he matched Arey's feet of winning two in a row.

6. Cody Meyer – After two horrible tournaments, he got back on track with a 7th at Cumberland and he has a very strong resumé from Beaver. He should make another big jump up the points standings this week.

7. Larry Nixon – The 66-year-old legend has come back strong following heart bypass surgery last fall and currently sits at No. 16 on the points list. He usually performs well at this venue in his home state.

8. J.T. Kenney – He used to struggle badly at Beaver, but his top-5 showing last year has given him a new regard for the lake. He found some quality in practice and could post another good finish if he can reconnect with it.

9. Casey Scanlon – In his first year on the Tour after moving over from the Bassmaster Elite Series, the Kansan has posted three straight top-20 finishes, including an 8th at Cumberland. He knows the Ozark lakes extremely well.

10. Andy Morgan – He'd be having yet another superb campaign if not for a bomb at Lake Travis and he's fared no worse than 6th in his last three visits to Beaver. Conditions seem ripe for him to land in the single digits once again.

Anglers will launch at 6:30 a.m. CT each day from Prairie Creek Recreation Area (9300 North Park Road, Rogers, Ark.). Weigh-ins on days 1 and 2 (Thursday and Friday) will take place in the same location beginning at 3 p.m. Weigh-ins on days 3 and 4 (Saturday and Sunday) will be held at the Walmart in Rogers (2110 W. Walnut St.) starting at 4 p.m.