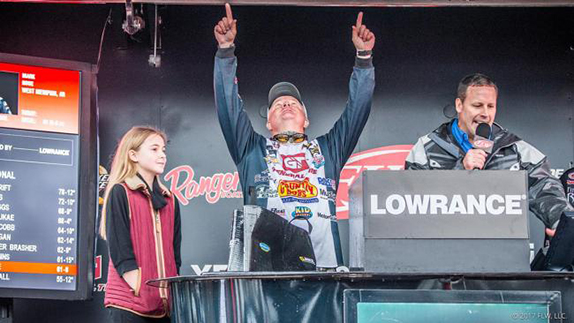 Mark Rose looks skyward once he realized he'd won the Lake Guntersville FLW Tour with his daughter by his side.

Last year, Mark Rose had a decision to make.

Thanks to his performance in the Bassmaster Southern Opens, he had the option of making the transition to the Elite Series in 2017 or he could come back to the FLW Tour, where he’s competed since 1999 and built an impressive résumé. Last October, he cleared the air about his situation and announced he’d be back with FLW.

After building a 4-pound, 12-ounce lead after 3 days of the Lake Guntersville FLW Tour, Rose secured his fourth career Tour victory today with an 18-03 stringer that helped him fend off a final-day charge from Bryan Thrift. Rose wound up with 79-11, which was enough to thwart Thrift’s rally by 15 ounces.

Rose has posted wins at other lakes along the Tennessee River, but a Guntersville victory had always eluded him – until now.

“I’ve had 2nds and 3rds here, but I can’t think of anywhere in the country I’d rather win than right here,” Rose said. “There is so much tradition here. It’s the heart of tournament bass fishing and to be in the same category as guys like (David) Fritts, (George) Cochran, Zell Rowland, Skeet (Reese) and Rick Clunn, it feels good to be able to win on a place that has such a rich history and tradition.”

Rose made a gusty move with 20 minutes left today to return to a spot in Browns Creek that had been among his best all week. Rather than stick with the chartreuse and brown crankbait that had worked for him, he opted for a shad-colored model. On his first cast, he caught a 5 1/2-pounder that virtually sealed the deal.

“I felt like when I caught that fish, something told me I’d just won with it,” he said. “I hollered so loud crows took off out of the trees.”

Thrift did all he could in sacking a final day-best 22-00 to finish with 78-12. It’s his fourth career FLW Tour runner-up finish.

The constantly changing conditions kept the field on its toes this week. Between the overcast skies, which were replaced by blue sky and sun and the shifting winds, constant adjustments were required to keep up with the bass that were largely still locked into their winter pattern.

Presentations had to be slow and frequent since the fish were not in a mood to chase bait. While Rose did all of his damage in one creek, other top finishers had to bounce around from spot to spot in search of active fish.

Details of Rose’s and the other top-5 finishers’ patterns will be published later this week.

The FLW Tour takes a week off before heading to Lake Travis near Austin, Texas, on Feb. 16-19. 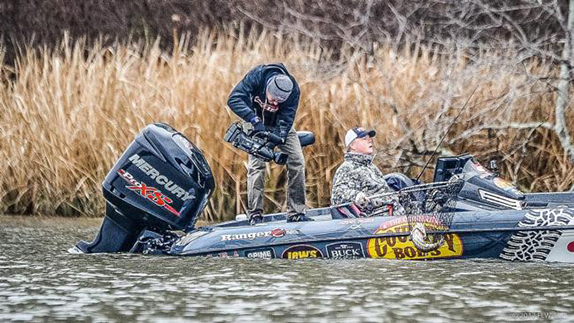 
Rose lands a solid keeper on the final day at Guntersville.

Late-Day Decision Won It For Rose

A few weeks ago, when Rose competed at the Harris Chain Southern Open, he did so out of a borrowed boat. His 2017 Ranger was still being completed and he finished a dismal 158th.

He was also making adjustments on the sponsor side after Walmart pulled back on its involvement with FLW. Rose had been a member of the Walmart team for the last four years. Amidst all the changes, he was able to get refocused on the season opener and apply his Tennessee River know-how to this wintertime derby at Guntersville.

“The first tournament of the year can be hard, especially when you’re getting your boat late and changing sponsors and you get the news about Walmart, it can be overwhelming and unnerving,” Rose said. “I feel like at Harris Chain I got all that unwound down there. It was a little bit of a distraction not having my boat yet. I only allowed myself 1 1/2 days of practice down there and I guessed wrong on which lake to fish.”

He didn’t make any wrong turns at Guntersville. His decision at the end of the day will be one he remembers for a long time, he said. His day had gone well up until that point, but roughly 20 minutes before check-in, he opted to go back to his key spot in Browns Creek one final time.

“I made a run in the opposite direction of weigh-in to an area where I’d caught three or four of my biggest ones all week,” he said. “I wasn’t going to fish close for 10 minutes. I decided I was going to run 5 minutes to fish for 5 minutes and push it. I made one cast and caught a 5 1/2-pounder.”

His reaction was out of character, he said.

“I’m a pretty laid-back guy, but I remember going Ike on ‘em,” he said, referencing Mike Iaconelli’s boisterous celebrations on the water. “I’ve always wondered when I see Mike go crazy where that stems from. I found out today on that 5 1/2-pounder.”

All 20 of his fish this week came out of Browns Creek, a nod to success he’d had there in a previous late-winter tournament. He targeted inside grass lines and rock transitions mostly with an out-of-production Strike King crankbait, a vibrating jig, a finesse football jig and a swimjig, which he didn’t throw until today.

Rather than being bitterly disappointed about losing by 15 ounces, Thrift was upbeat and grateful about how his tournament unfolded, especially after a difficult practice session.

When asked what he’ll remember most about the season opener, he said, “Probably how bad practice was and how good the tournament turned out.”

There wasn’t anything significant that he’d change about how he fished.

“I fished clean,” he said. “Yeah, it sucks to catch a big bag and lose. Mark did his job, too. That’s part of trailing by 5 pounds. You have to bust ‘em and I did my part, but he did his part to win. I didn’t miss any and I didn’t lose any. It just wasn’t meant to be.” 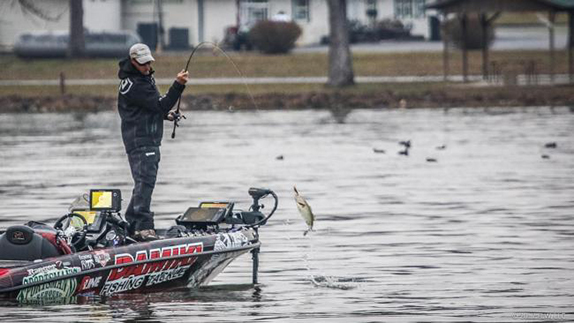 
Bryan Thrift had no regrets about how he fished this week.

Usually known for fishing at a frenetic pace and hitting as many spots during a day as possible, Thrift stayed put in one area until 11 a.m. today. He had a good limit by 9:45, including one close to 7 pounds, and caught a decent upgrade shortly after but a 90-minute dry spell prompted him to visit other spots.

“I tried to catch a kicker elsewhere,” he said. “I caught six or seven at another spot, including one upgrade, but the rest were little ones.”

He focused exclusively on fishing grass with a lipless crankbait and a square-bill crankbait in 3 to 6 feet of water.

After practice, Davis felt like if he could average 17 pounds per day, he’d put himself in contention for the win. He was right.

If it weren’t for one of the best anglers on the Tennessee River and one of the most consistent performers on the FLW Tour, Davis would be celebrating his first Tour victory today. Instead, he’s happy with a 3rd-place finish. Last year, he took 2nd in the season opener at Lake Okeechobee.

“I’m happy with it because in practice I felt like if I caught 17 per day I’d be happy,” he said. “I averaged more than that and I never had a big bite, so I’m happy with it. I didn’t get beat by a bridge or an Alabama rig, so to me it’s all good.”

He was tempted to run around today and hit places that he knows from all of his history on the lake, but he opted to settle down and work over a number of areas.

“Today, I sat on a place for an hour and 45 minutes and made the same cast over and over,” he said. “I buckled down and did what I needed to do. It’s probably the toughest I’ve seen the lake.”

By spending additional time on his starting spot, he was able to get some good weight in the boat right away, something he’d been unable to do the first three days.

“I caught a 4 1/2 and two 3s and four shorts right away,” he said. “I think I made all the right decisions at the right times.”

He hit about 15 spots, which was the fewest of any day in the tournament. 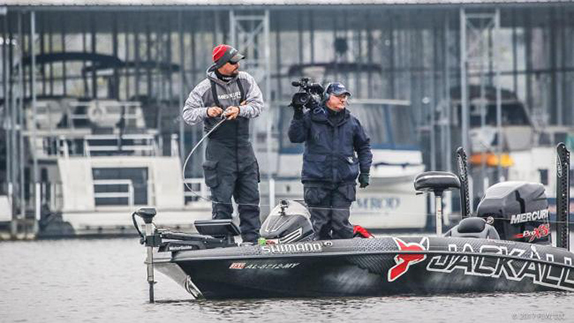 “There’s not one thing I’d have done different,” he added. “Today, I had a 5-pounder hit my lure with eight feet of line left and it just came off and then it sat there in the water within range of my net. It was like he was stunned. I only lost two that would’ve helped me and those four pounds wouldn’t have been enough to move me past Bryan.”

Since the 2017 schedule was released last summer, Suggs had been wondering how the seven-event lineup would impact the points-per-tournament average needed to qualify for the Forrest Wood Cup.

After locking up his eighth career FLW Tour top-5 finish, he can set his mind back on a six-event schedule.

“With the seven events and not knowing how the points will shake out, I’m back on a six-event deal now and that’s an awesome feeling,” he said. “I know in six tournaments about what I’ll need to make the Cup. These were bonus points for me.

“Anytime you can get a top-10 finish, if you’re not excited, you don’t need to be out here. I’m tickled to death.”

Suggs continued to mine eelgrass flats today with a lipless crankbait, focusing on both inside and outside edges depending on the weather and wind.

“This morning, I jumped out and went to catching them, but then the wind got up and it when it did, it ripped all of the eelgrass up and destroyed some of my places,” he said. “I couldn’t get my bait down to them so I wish I would’ve had some cleaner areas to go to with a south wind.”

He caught more keepers (12) today than he had the other three days, but he didn’t feel he was around the big fish he needed to make a significant charge at the lead.

“I don’t think the area I was in was loaded with big fish yet,” he said. “There are still a lot of fish deep. I wasn’t on the big girls; I was on the 17-pound average fish. If I had do something over again, I would’ve spent more time around some of the bridges for something to run to on a day like today when you don’t have all the boats to fight with.”

5th: No Regrets for Fukae

Fukae had no regrets about how the season opener went as he locked up a 5th-place finish for the second straight year in the opener.

“I’m okay with 5th,” he said. “It’s a good start for me. I just want to be consistent this season and maybe win one.”

He caught 12 bass total today, including seven keepers, which was consistent with what he’d caught over the first three days.

“I wouldn't have changed anything,” he said. “I just followed the season and what they wanted. I found a spot and matched the bait to the time of year.”

He threw a lipless crankbait virtually all tournament and made repeated casts to the same spot, which had a mix of eelgrass and hydrilla on it. Today, he moved out to some deeper water in hopes of enticing some bigger females to bite. His best fish today was a 4-pounder caught late in the day.

“The cloud cover helped me this morning,” he said, “but the difference was the wind direction changed.”