BACK
Solid Start At Oneida

Svebek Poised For Another Crack At Pro Fishing 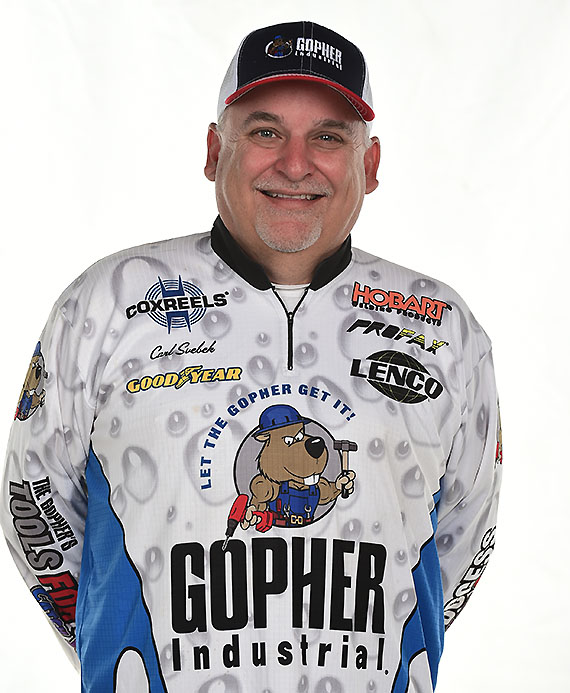 Carl Svebek, who left tour-level fishing after the 2009 season, is on a quest to qualify for the BassMaster Elite Series.

Last week's Oneida Lake Bassmaster Northern Open was the first taste of high-level tournament fishing that Carl Svebek III had gotten in the past 7 years.

"Sitting in the boat on that first morning, waiting for them to call my number, the butterflies ... there's no feeling like it," he said. "It was almost unbelievable to get to experience that again.

"I had the chill-bumps real bad, not knowing what to expect. I was just tickled to death, but I had the jitters so bad that it felt like I'd never fished before."

The veteran of 12 tour-level campaigns (11 with FLW and one on the old Bassmaster Top 100s) acquitted himself well, catching bags that weighed 15-00 and 14-12 to end up 38th in the field of 200 competitors. His ultimate goal is to qualify for the Bassmaster Elite Series, and his initial placement kept alive the possibility that he could achieve that this year.

His confidence will be high for next month's derby at the James River. The last event on the circuit will take place at Lake Champlain in September, and then the Top 5 in the final points standings will be offered Elite slots for 2017.

"That first one was pretty important because if you have a bad one, then the rest of the season could be gloom and doom," he said. "I'd love to go to Champlain and still have a chance."

Svebek, who'll turn 50 a few days before Christmas, wasn't the most successful FLW Tour pro during his tenure with that organization, but he was a solid performer (five Top-10s and a high finish of 7th in the Angler of the Year race) and was among the most popular anglers over a fairly lengthy stretch of time. His short (5-foot-4), somewhat rotund stature, huge smile and easy-going demeanor endeared him to fans and industry insiders and he got considerable exposure through several FLW team deals and a starring role in a Walmart commercial that was broadcast nationally.

Things soured for him in '09, however, when Castrol (his team sponsor) cut back its involvement with fishing due to the country's economic meltdown at the same time he was going through an acrimonious divorce. That convergence of circumstances caused him to turn in a different direction.

"I only had a week to figure out what I was going to do and it seemed like the right time to get out," he said.

With two high school-age daughters and a younger son to support, he got a job as an account manager for Valvoline, covering a territory that included parts of Oklahoma, Arkansas and his native Texas, and figured he'd be there until retirement age. Eighteen months later, however, the company restructured and laid off hundreds of employees, and his lack of seniority ensured that'd he'd be one of them.

He said that a start-up venture with a partner in the oil industry became short-lived when the other party insisted that Svebek either sell out to him or the partner would sell his own portion (he opted for the former). He was unemployed when he got a call last November from David Jones, a former high school classmate in east Texas who's one of the owners of Gopher Industrial.

Gopher is based in Orange, Texas, which serves as the host city for Elite Series events at the Sabine River. It distributes products and services to a wide variety of industries (construction, maintenance, fabrication, refining, chemical, power generation, etc.) and has also become heavily involved in pro fishing, sponsoring Elite pros Davy Hite and Todd Faircloth.

Jones' original plan was to bring Svebek in for a 2-week consulting stint. That continued into February, and on Super Bowl Sunday, Svebek was offered the chance to come on board full-time to work in business development and join the company's stable of anglers.

"David was like, 'We've got to get you started (in fishing) again,' but most of the tournaments had been filled since November," Svebek said. "We eventually found out there were some openings in the Northerns and he called B.A.S.S. and I was able to get in."

Some of his "day job" duties center around fishing and hunting excursions with Gopher clients. Starting this fall, he'll also be involved with "Tools for Success," a school demonstration program that uses the company's name as an acronym for Goals, Organization, Preparation, Honesty, Education, and Reading.

"I've had so much fun reaching out to our customers," he said. "A lot of guys in this part of the country are outdoorsmen – they like hunting and they like fishing – so we have that in common right off the get-go.

"We had a group one time with Davy, Todd and myself and we had a little competition at Toledo Bend. Things like that allow us to reach those people who have the same interests that we do."

A Friend in a High Place

One of Svebek's biggest fans is B.A.S.S. co-owner Jerry McKinnis. The two became close when McKinnis' company, JM Associates, produced FLW's TV shows, and Svebek eventually appeared in three episodes of McKinnis' long-running program, The Fishin' Hole. Svebek refers to McKinnis as "a second father" and they speak by phone almost every week.

McKinnis laughed hard Thursday when he recounted getting a call last week from Jones, whose company is also a B.A.S.S. sponsor. Jones jokingly requested that the podium on the weigh-in stage at Cayuga be removed because Svebek was too short for the Gopher logo on his shirt to be displayed when his bag went on the scale.

"Carl's been through some rough times and he's had a lot of tough luck since the last time he fished, but he's a hard-working little guy," McKinnis said. "It's great to see him get squared away with Gopher – he knows the oil and gas industry and when they decided they wanted to have an angler in the Opens in addition to the guys they've got in the Elite Series, Carl was all over that.

"I told him to just shoot for (a placement) in the 30s at Oneida and he was able to do that. He's serious about this. He's going for it – he wants into the Elites."

For now, Svebek is thrilled just to get his competitive juices flowing after such a long layoff.

"I've started to think again that I was born to do this. I never claimed to be a Kevin VanDam, but I enjoy it, it's what I love to do, and I was decent at it.

"There was never a day that went by when I didn't think about it."

> If Svebek doesn't qualify for the Elite Series through the Northern circuit this year, he'll be back to try again in 2017 in all three Open divisions. "I don't know if this thing's going to take 1 year or 5," he said.

> Gambler Lures still produces the wacky-style Sweebo Worm that was named for him, but he opted to throw a Yamamoto Senko on a Gambler weighted wacky hook at Oneida. "I found some fish coming out of a bay, coming off the spawn, and I basically stayed in one place and had an absolute blast."