Some Heavy Hitters Sitting Sunday Out 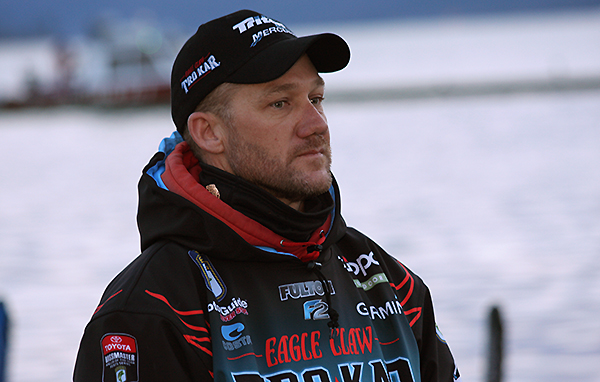 Brent Chapman lost a fish today that probably would've earned him a spot among the Top 25.

While Lake Guntersville has earned its reputation as being one of the most prolific bass fisheries in the country, it's not always kind to everyone. In fact, it can be downright unforgiving, umbrella rig or no umbrella rig.

A number of anglers found that out on the sport's biggest stage this week. There were seven past Bassmaster Classic winners in this year's Classic field. Not one made it to Sunday, including four-time winner Kevin VanDam.

Other notables who found themselves buried at or near the bottom of the leaderboard were Mark Davis (43rd), Mike Iaconelli (47th), Skeet Reese (49th), Gerald Swindle (53rd) and Gary Klein (55th).

For Iaconelli, who was 4th at last year's Classic at Grand Lake and won an Elite Series event at Guntersville in 2006, this year's result marks his second-worst Classic finish of his career. He was 51st at Lake Toho in '06.

"If I put every fish in the boat that bit I'd have the fish to be in contention," he said. "In hindsight, I was around the right fish, I just didn't capitalize."

Reese, the 2007 Angler of the Year and 2009 Classic winner, hadn't finished lower than 43rd in 13 previous Classic appearances. This week, his shallow grass pattern dried up and he didn't have much in the way of strong backup plans.

"I got on a shoreline grass bite and ran it hard yesterday," he said. "I must've ran the wrong stuff or who knows, but there is definitely something else going on. I'm thinking they were on some steeper banks, maybe some 45-degree banks. I was looking more at the flat stuff. That's my only guess right now."

After he weighed in, 2012 AOY Brent Chapman felt like he had done enough to qualify for the final day after weighing 13-15 today. In the end, he was 2 1/2 pounds shy of making the Top 25.

"I finally had a big bite. I hadn't lost a fish in 2 days except that one," he said. "I had it right by the boat and I reached for it and it pulled off. When you get a bite like that and then you lose it, it kind of deflates you a little bit, especially as tough as it was."

Guntersville not only swallowed up some seasoned veterans, it left Classic rookies shaking their heads, too.

"Maybe getting locked into one thing," Chris Zaldain said when asked where he thinks he went wrong this week after placing 52nd. "I thought about it on the drive down here. This was my very first time on the Tennessee River system and I think, whether they're spawning or not, you need to find feeding fish. You look at the guys who are catching them on the main river.

"Where I'm from, you go to the backs of the creeks and you look for spawning-type fish or big solos. Here, it sounds like they're finding feeding fish on causeway bridges or funnel areas."

Clifford Pirch, also making his Classic debut, was opposed to fishing grass during the practice period because he felt he needed to be doing something different since the vibe was so many others would be targeting the healthy green stuff.

"I came here looking for that other deal – that deep school where 10-pounders live – and those deep, hard targets and deep breaks," he said. "The last couple Februarys, they've weighed some big bags offshore. It just didn't happen this week. I put all of my eggs in that basket knowing that I needed something other than just running shallow grass with everybody. I just didn't feel like I could compete doing that. I can catch them like that. It's fun, but I just didn't feel like that's what I needed to do."

Guntersville was especially unkind to Klein, who was making his 30th appearance in the Classic. He managed one fish each day and wound up finishing 55th.

"If I had it to all over again from the beginning, I would've practiced different. I keep saying it and I get hard-headed sometimes, but I need to listen to myself because a good practice leads to a good event. I didn't practice smart. I practiced so stupid.

"You can't fish the entire lake in a day of practice. I covered too much water. I hadn't fished the lake since our last May (Elite Series) event. On Friday morning (the first day of official practice), when it was cold, I was anticipating places. I pulled in on an area and caught a 6-pounder. I shook another one off. Then I said, 'Oh man, I'm going to go around the corner.' I fished over there and caught an 8. Then I went over another area and caught another good one.

"I didn't have one under 5, but I'd only have eight bites all day long. You can't win doing that."