BACK
Pirch Edged Out 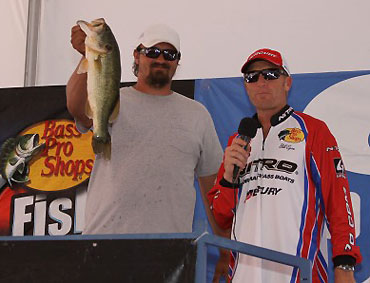 Sean Stafford's final-day bag was topped by a fish that weighed nearly 5 pounds.

Sean Stafford was in 21st place after day 1 of the WON Bass U.S. Open, then moved up 12 slots on day 2. Another 8 places were the maximum he could claim today, and the towering Northern Californian did that with a 13.16-pound bag that gave him a 3-day total of 34.40.

He narrowly edged out two-time winner Clifford Pirch for the crown at the most prestigious event in the West. The FLW Tour pro from Arizona, who began the day with the lead, sacked 9.92 to finish with 34.25.

Here are the totals for the bottom half of the final Top 10:

Stafford's bag was far and away the biggest of the final day. It was caught under bluebird conditions, which were a stark contrast to the wind and rain of the previous day.

He and Watson shared some water in the lake's upper basin throughout the event. The fish were near the banks and bit reaction baits on stormy day 2, but moved out deeper when the sun returned today and had to be enticed with more subtle tactics.

The 6-foot-5 Stafford, a resident of Fairfield, Calif. (adjacent to the California Delta), had never finished higher than 10th in this event. He had a 2nd-place finish at Mead in an FLW EverStart in February 2007 – a brutally tough derby that Jeff Michels won despite not catching a single keeper on the final day.

"I'm not sure it's real yet," he said. "I'm still a little bit beside myself. I've been up there in the Top 5 before after the first or second day, but it's Lake Mead and you almost always have that day when you just can't catch them. You don't know what to do or where to go.

"I sort of expected that to happen today, and that actually kind of calmed me down. I just went fishing, which is what I needed to do."

Of the 15 fish he brought to the scale, seven inhaled a tube (including all five today), four took a spinnerbait and four came on topwater plugs. Full details of his winning pattern will be published soon.

Pirch could swallow the defeat easier had he not farmed out his biggest bite of the tournament in the final minutes of the day.

"I'm a little disgusted, to be honest," he said. "If I'd caught everything (that bit) and still lost, that would be one thing, but that fish was enormous – it was the biggest one I've ever seen at Lake Mead. And all I needed was a dang 2-pounder.

"It feels good to have a high finish, but it doesn't feel so good when you kind of boot it. I hate to dwell on it and I know a lot of other guys lost good ones, but I really wish I'd never seen that fish or gotten that bite."

The bite came after he'd gone about 2 hours without having his line tightened.

"I was walking a topwater and it came over some trees, and it was like dynamite going off. My heart just exploded. It was definitely a Guntersville- or Clear Lake-type bite."

He junk-fished through most of the event with eight or 10 rods on the deck at all times. In addition to the topwater, he also caught weigh-in fish on a Strike King 6XD crankbait, a jig and a couple of different types of worms.

"Some would be at the mouth of a little bay, others would be on secondary places and some would be all the way in the back. Every mile, it seemed like the whole deal would turn upside down and around the next corner would be like a different world.

"Lake Mead normally patterns really well, but it was different this time."

"I could be a little happier, but not much," he said. "Anytime I can get up on this stage as one of the Top 3 and know I did well, it's a wonderful feeling. I'm not dissatisfied and I'm not disappointed. Sean Stafford's a great guy and an excellent angler."

"The fish were all just solid. It wasn't like you could just get there in the morning and whack 'em all day long – you had to fish the water. It was a real challenge to try to make the right adjustments and it was a great sense of accomplishment to succeed at it.

"Today I dropped the hardbaits and fished slower and deeper. The fish were there – they'd just moved off the banks."

He threw buzzbaits, spinnerbaits and jigs the first 2 days, then went with a dropshot and a jig today.

"It was obvious that the reaction bite wasn't going to be there."

Day-1 leader Yamamoto had hoped for the return of the sun, but its presence didn't result in the kind of day he'd hoped for.

"I had a brutal day," he said. "I don't even know what to say. I just got off the phone with Pops (the legendary Gary Yamamoto) and I've been trying to figure it out for awhile. I swung for the fences, but there really are no fences on Mead.

"I ran the whole lake and fished everything I had, but I just didn't get any decent bites. I must've caught 30 fish, but they were all under 12 inches. It was 12:30 before I caught a keeper.

"I had so many people rooting for me and I feel like I let them down," he added. "It was cool while it lasted."

He offered the fish a variety of enticements that included buzzbaits, spinnerbaits, jigs and dropshots.

"I was mostly just covering water with reaction baits."